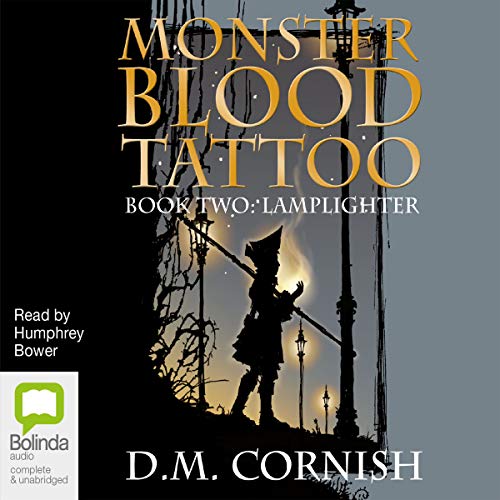 Simultaneous release with the print edition, superbly narrated by the award-winning Humphrey Bower.

Gripping fantasy adventure with larger-than-life characters and a world mapped in fascinating detail.

The Half-Continent is becoming even more unsafe - monster attacks are on the rise, and every far-flung village or town is calling for help to fight them. Into this dangerous landscape the lamplighters must venture daily, keeping the roads safely lit for travellers. It is not a job for the faint-hearted, and every week there are reports of new theroscades. Foundling Rossamünd Bookchild, sworn into the Emperor's Service as a prentice lamplighter, is finding his training at Winstermill Fortress difficult and lonely. His life is further complicated by the arrival of a young wit, determined to spite her famous mother by becoming a lowly lantern-stick. As Rossamünd begins to make new friends in this sinister world, he also seems to make more enemies, finding himself pushed towards a terrible destiny, a fate beyond anything he could ever have imagined.

Read more
©2008 D.M. Cornish (P)2008 Bolinda Audio
Previous page
Next page
Final days - Don't miss out!
Learn more about membership
By completing your purchase, you agree to Audible’s Conditions Of Use and Privacy Notice.
Sold and delivered by Audible, an Amazon company

4.6 out of 5 stars
4.6 out of 5
54 global ratings
How are ratings calculated?
To calculate the overall star rating and percentage breakdown by star, we don’t use a simple average. Instead, our system considers things like how recent a review is and if the reviewer bought the item on Amazon. It also analyses reviews to verify trustworthiness.

starflowergardener
5.0 out of 5 stars Love this author and his dark, atmospheric storytelling
Reviewed in the United States on 18 August 2019
Verified Purchase
This is one of my favorite book series, and unusually for a series, this middle book is my favorite. It's increasingly obvious as the story progresses that the main character is going to be subjected to a painful plot twist, but exactly how it will unfold is what makes it suspenseful and interesting and it's highly re-readable, IMO. My favorite thing is how dark and atmospheric the storytelling is -- I usually reread these near Halloween. The story's exotic locations all feel real and alive, too. I have a headcanon that the main character is autistic like me, his experiences trying to learn how to fit in and feeling like he doesn't belong and doesn't know why are very relatable.
Read more
Report abuse

Olgy
5.0 out of 5 stars Lamplighter: A great read for middle grade students
Reviewed in the United States on 1 January 2009
Verified Purchase
The second book in D.M. Cornish's Monster Blood Tattoo series, Lamplighter, is as engrossing as book one and should grab middle grade students' attention just as much. [ISBN: 978-0399246395; Putnam Juvenile; May 1, 2008; Ages 9-12]

Lamplighter has enough adventure-filled pages to keep boys interested in reading it. With the addition of Threnody to the cast, girls will also find this a good read. Threnody is a valiant young girl determined to make it in a man's world. As the first female ever to be allowed to be a lamplighter, she plays a strong counterpart to Rossamund, our protagonist.

Rossamund is an orphan who has received the king's bullion in payment for services he has yet to render. He is now obligated to work at dusk and dawn, to light and douse the lamps that line the King's Highway. This would be a simple enough job to carry out were it not for the monsters who inhabit the land and attack and feed upon travelers. Because of this, lamplighters are also trained as soldiers. Not only does Rossamund's life hang in the balance every time he goes out to do his job, he also faces dangers within the city walls. It's there he must face people in high places, political "monsters" also intent on doing him harm.

At one level, Lamplighter is a fantastic adventure story that should be made into a film. At a deeper level, it's the story of a boy trying to discover who he is and where he fits in the scheme of things. The power of Lamplighter is that it's written in such a way that it'll be easy for kids of all ages to identify with Rossamund's fears, challenges, failures, defeats, and victories. Monsters are monsters, regardless of what shape they come in. They are things in life that scare us, especially when we're young. It's wonderful to see someone like Rossamund face his fears--though sometimes in spite of himself and this makes it all the more comical to watch--and by trial and error overcome both the fears coming at him from the outside world and those emanating from his own insecurities.

The cast of characters in Lamplighter is well put together. It was wonderful to meet again Rossamund's old school teachers as well as Lamplighter's Agent Sebastipole, who first recruited Rossamund into the King's service and Europe, the Branden Rose, the powerful and feared teratologist. These friends play a much more significant role in Rossamund's life this time around.

In Lamplighter we also meet Lamplighter-Sergeant Grindrod as a gruff taskmaster who does have the welfare of those under him in mind. A most intriguing character shows up in Numps, who is thought to be a madman by many and it's up to Rossamund to decide whether or not he is. There are new comrades-at-arms and friends from the most unlikely places that cross Rossamund's path throughout the story. Rossamund's life is touched one way or the other by these encounters and so, by default, is the reader. Through it all, with old and new friends and enemies coming in and out of Rossamund's life, Cornish still manages to keep the spotlight on Rossamund, the rightful protagonist in the story.

As he did in book one, Cornish takes back story and extra information that could easily slow down the storyline and puts it in the Explicarium at the end of the book. This "glossary of terms and explanations including appendices" goes on for 114 pages. It is there for readers to explore if they want to.

At a time when the online conversation is whether a Newbery winner "should offer readers delight and instruction in equal measure," here's a title that unassumingly but assuredly manages to deliver both.  Lamplighter (Monster Blood Tattoo, Book 2)
Reviewed by ChildrenComeFirst.com and posted at amazon.com with permission: [...]
Read more
5 people found this helpful
Report abuse

Dan S. Tong
5.0 out of 5 stars Lamplighter is a True Masterpiece!
Reviewed in the United States on 12 November 2008
Verified Purchase
If you've already read Foundling (Book 1 of the Monster Blood Tattoo series), then you are indeed in for a treat. As much as I liked Foundling, and I loved it and rave about it to anyone who will listen, Lamplighter, is even better. Cornish is one of those rare, master storytellers, who weaves his magic so deftly and so thoroughly, that before you can blink an eyelash, you have totally entered his endlessly inventive, complex, detailed world. You experience the entire range of Rossamund's emotions from alienating loneliness and mind numbing fear, to the excitement of finding a new friend.

Cornish has a way with words, that is evocative of the atmosphere of the Gormenghast novels, as well as the work of the great Jack Vance, but he does all this with his own unique style. He invents words, because our vocabulary simply cannot begin to describe the uniqueness of the denizens and way of life of the Half Continent. This is just part of what makes the book so compelling, charming and so very palpable. It is very, very difficult to not just sit to read it all in one big, long gulp.

Cornish has great psychological insight into Rossamund, and the interaction with all of the other characters in the book. Life indeed is not all black and white, and some of the worst monsters, in fact are human.

In addition to purchasing the first hardcover edition, I'm also listening to the audio book version. First I listen to a chapter or two, then I read the same chapters in the book. I'm going slow, savoring it like the finest meal and I desperately wish it would never end.

Thank you D.M. Cornish for bringing such great pleasure, such an adventure, into my life.

Daniel F. Van Der Werken, Jr.
5.0 out of 5 stars Author Neatly Transitions the Character
Reviewed in the United States on 1 September 2009
Verified Purchase
This book is a transition book. We have Rossamund, who was bound and determined from the first book to fulfill his duty to society and his fellows to become a responsible Lamplighter. In book 1, while he had troubles getting to the Lamplighter Headquarters for training, he finally reaches it. While Rossumund had adventures getting there and a job offer any one of us would consider better than being a Lamplight, he stuck to his original plan.

In this book, Book 2, Rossamund does indeed begin training and graduates from the academy to become what he started out to do. However, we can guess that his life isn't going to continue on as a Lamplighter. Otherwise, there'd be no reason to keep reading, right? I mean if it's a story of "travel to the academy, train, work..." we'd not have read any further. The problem is that Rossamund isn't going to stop pursuing his goal willingly.

Therefore, this book is the transition. Rossamund does achieve his base goal, but things go awry. Without spoiling the ending, we find this is the book where the major transition occurs and Rossamund is finally willing to give up his original goal and move on to what we, the readers, consider the more interesting part of the story. Well done.
Read more
One person found this helpful
Report abuse

Bish Denham
4.0 out of 5 stars Well worth the time it takes
Reviewed in the United States on 15 December 2013
Verified Purchase
I have to admit I was a little intimidated by the 700 pages. But I'd read the first book and totally enjoyed it so I was determined to give the second book a chance. I'm glad I did. I'm giving this four stars only because of the complicated language of made up words that was at times both difficult to read while at the same time being a kind of character which gave immense depth to the world D. M. Cornish has created. I think to enjoy this book you have to love description. I'm a slow reader and this book required time, taking me about two months. Granted I took breaks and read a couple of other books during that time, but I kept getting pulled back into this story.

Not since the Lord of the Rings have I been so captivated. Rossamund's world is totally unique and different and thus is a refreshing break from wizards, fairies, psychic powers, and zombies.

I don't care how long it takes me, I'll be reading the third book because I HAVE to know what's going to happen next.
Read more
Report abuse
See all reviews