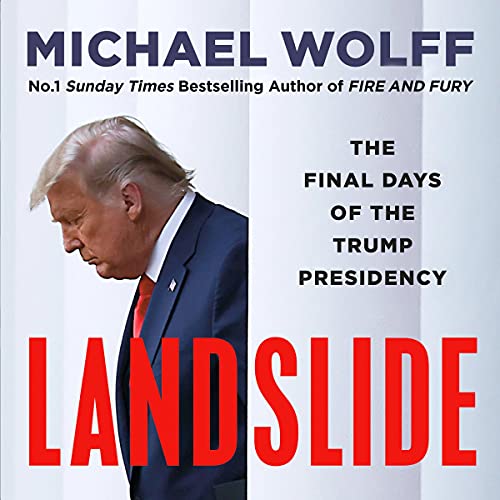 Landslide: The Final Days of the Trump Presidency

New York Times best-selling author of Fire and Fury and Siege completes the trilogy on the epic presidency of Donald J. Trump.

With Fire and Fury, Wolff defined the first phase of the Trump administration; in Siege, he wrote an explosive account of a presidency under fire. In Landslide, Wolff closes the story of Trump's four years in office and his tumultuous last months at the helm of the country, based on Wolff's extraordinary access to White House aides and to the former president himself, yielding a wealth of new information and insights about what really happened inside the highest office in the land, and the world.

Read more
©2021 Michael Wolff (P)2021 Hachette Audio
Previous page
Next page
Learn more about membership
By completing your purchase, you agree to Audible’s Conditions Of Use and Privacy Notice.
Sold and delivered by Audible, an Amazon company

4.3 out of 5 stars
4.3 out of 5
5,664 global ratings
How are ratings calculated?
To calculate the overall star rating and percentage breakdown by star, we don’t use a simple average. Instead, our system considers things like how recent a review is and if the reviewer bought the item on Amazon. It also analyses reviews to verify trustworthiness.

Xanthosia
2.0 out of 5 stars The research is there but not an easy read.
Reviewed in Australia on 21 July 2021
Verified Purchase
Landslide should be an engrossing, exciting recount of Trump’s last days in office. The research is there. The main characters are waiting to play their roles. But I found this book incredibly frustrating because of the author’s penchant for paragraph long sentences full of parentheses, colons and other more obscure punctuation. This, with the authors use of odd words for example “heretofore”,(Why not just say before ) caused me to have to reread large segments to get the meaning. I am still pondering what are “with-him-or-against-him silos”.
As a non American, I quite accept the fact that I will not get all references and have to do some personal research, for example Wolf’s reference to “ K Street “ in relation to billionaire Koch brothers. But unnecessary personal details such as Ike Perlmutter who was a neighbour AND a Mar-a-Largo neighbour AND a show biz billionaire who sold bankrupt Marvel comics for $4 billion is just too much detail for a guy who is mentioned once- even if in a six line, single sentence paragraph.
The book never had a chance to build to it’s exciting climax because I was always being pulled back by the style of writing. This maybe a great retelling for those familiar with the people and events but it did not live up to my expectations for a readable explanation of an amazing time.
Read more
2 people found this helpful
Helpful
Report abuse

Tablet
5.0 out of 5 stars Wolff at the door
Reviewed in Australia on 17 July 2021
Verified Purchase
... and they let Wolff back in. It's a roller coaster of a book because it makes your guts churn. I couldn't read it in one hit because it was so intense and bonkers.

The universe dodged a bullet; this is the story of that bullet.
Read more
One person found this helpful
Helpful
Report abuse

R. Stonecash
4.0 out of 5 stars How does Wolff get such access?
Reviewed in Australia on 28 September 2021
Verified Purchase
Wolff’s book on the final days off the Trump administration (or what was left of it) is fascinating, absorbing and laughable, if it weren’t true. Trump truly has no grip on reality and the people around him fed his fantasy and still do by all accounts. An interesting question is how Wolff gets his access to the intimate detail. That’s a story in itself. Well worth a read. My only quibble is Wolff’s writing - sometimes it’s so convoluted that you have to read a sentence two or three times to figure out where he’s heading. He loves the qualifying phrases!
Read more
Helpful
Report abuse

DONALD J MCLEAN
4.0 out of 5 stars The Emperor really does have no clothes
Reviewed in Australia on 21 July 2021
Verified Purchase
Amazing insight into the delusions of the leader of the free world in his last few weeks of power. Truth really is stranger than fiction.
Read more
Helpful
Report abuse

Saint Quentin
5.0 out of 5 stars Landslide versus Oblivion!
Reviewed in Australia on 23 July 2021
Verified Purchase
Another great work by MW. How on this precious earth, despite global warming, any intelligent voter could contemplate another four years of a president of the USA like what has occurred in the last four years, is beyond belief, let alone realty of a sane mind. Thank God for the Westminster System of country governance applicable in more rational States, where the votes of the intelligent provide a more stable, if not always, happy, result.
Read more
Helpful
Report abuse
See all reviews

enthusiast
3.0 out of 5 stars annoying style
Reviewed in the United Kingdom on 16 July 2021
Verified Purchase
'Or, as Trump aides, as confounded as any by the Oval Office crowds, ado, and unlikely characters, often put it, the Star Wars bar scene.' p10. There are many more examples at least as bad.

Try this p167 (just to prove I have read that far.) 'But curiously,the very fact that the Trump gambit was not going to succeed, that the election challenge had failed to advance and that all the checks against it had become only more formidable - and now, with the second-most-important person in the Republican partry and the most powerful Republican on the Hill standing against it - only made it easier to support.'

Woolff's style is so in need of a good editor. The above sentence is typical of the book, and grates. There are insights but it could have been so much more readable. Reads as though when a sentence wasn't coming together he stuck in some punctuation, rather than revise. This book was about making money for author and publisher - not about enlightenment. Rushed to get in the market early, and it shows.
Read more
43 people found this helpful
Report abuse

A. Carson
3.0 out of 5 stars good enough but irritating writing style
Reviewed in the United Kingdom on 21 July 2021
Verified Purchase
i agree with a previous reviewer. interesting content, poorly delivered. it really needs a decent, and, indeed, it must be said, without doubt - all things taken into consideration and with the benefit of having read it, although i can imagine that others may differ - a rigorous proof reader to go over it and redraft, making the changes that the initial drafting should have made, had it been properly proofed...

...that exemplifies the sort of style this book is written in....irritating.
Read more
20 people found this helpful
Report abuse

Basil
4.0 out of 5 stars Interesting at start but left me with a feeling of emptiness by the end
Reviewed in the United Kingdom on 22 July 2021
Verified Purchase
Interesting to read lots of juicy bits of gossip about the final Trump campaign. However, many of them had been revealed in the pre-publication publicity, so the impact was reduced. I was still glued to the page for most of the book, but curiously I could not wade through the verbatim quotes of Trump speaking. His stream-of-consciousness verbiage is interesting - for the first minute or so, but then becomes really boring. It makes me wonder why his adoring fanbase can listen to his rambling monologues that last hours. Then at the end of the book, I realised that the author had to befriend Trump in order to get material for his book. So did the authors of the other 2 Trump books coming out now. It dawned on me that these authors have a weird symbiotic relationship with Trump. They lambast him for his terrible actions, but they are making money off it. They could have gone in harder on Trump. I'd like to have seen interviews, not just with Trump insiders, but with Trump victims, e.g. intimidated election officials and Capitol Hil police officers, to show the real harm Trump and Trumpism and why it needs to be decisively defeated.
Read more
9 people found this helpful
Report abuse

Norman Housley
5.0 out of 5 stars Addictive and astonishing
Reviewed in the United Kingdom on 16 July 2021
Verified Purchase
This book is the very definition of unputdownable. Writing and production alike were rushed and it shows. Lots of technical stuff is simply taken as read and the huge list of characters can be baffling. But these are minor quibbles. Wolff provides a rollercoaster ride through the utter mayhem of November-January. He highlights the eccentricity of Trump’s worldview, the freak show of his entourage and the enigma of his seemingly invincible popularity. The ending cannot help but leave the reader gloomy about the future of US democracy, which the Trump phenomenon has shown to be deeply vulnerable.
Read more
9 people found this helpful
Report abuse

Kingsley Flint
5.0 out of 5 stars Unputdownable exciting account of a monster’s downfall
Reviewed in the United Kingdom on 16 August 2021
Verified Purchase
How incredible that an autocratic, mentally deranged and very dangerous person could aspire to the title of the most powerful man in the World. In modern times so many have forgotten the Second World War and how it came about. Michael Wolf gives an at once entertaining and alarming intimate picture of the ending of Trump’s presidency and the birth, perhaps largely due to Rudolph Giuliani, of the stolen election myth disaster now threatening the very roots of western democracy. The very fact that the book is so compelling and entertaining illustrates the danger of the Trump phenomenon, and also all the other autocratic governments and tendencies all over the globe. The human race has hypnotised itself through television and democracy has been corrupted by social media and it is this aspect of 'entertainment’ that has us all transfixed like frightened or unconscious rabbits in the oncoming headlights of global disaster
Read more
5 people found this helpful
Report abuse
See all reviews