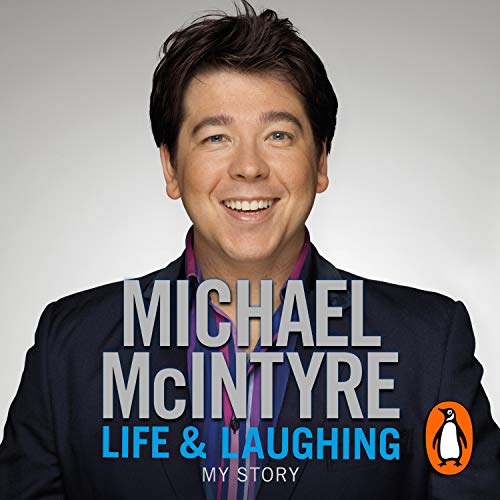 Life and Laughing: My Story

The riveting, poignant and remarkably honest biography from Britain's biggest comedy star, Michael McIntyre, brought to you by Penguin.

His debut stand-up DVD, Live & Laughing, was the fastest selling of all time.

But how did he get there?

In his compelling autobiography, Michael McIntyre reveals all.

With deeply personal and captivating narration, Michael unveils his incredible journey: from his showbiz roots, to his appalling attempts to attract the opposite sex, to going from selling just one ticket at the Edinburgh Festival to half a million at his last tour.

Written and narrated by Michael himself, Life and Laughing is the hilarious performance and life story from one of the country's most loved comics.

4.6 out of 5 stars
4.6 out of 5
1,741 global ratings
How are ratings calculated?
To calculate the overall star rating and percentage breakdown by star, we don’t use a simple average. Instead, our system considers things like how recent a review is and if the reviewer bought the item on Amazon. It also analyses reviews to verify trustworthiness.

Michael McIntyre has become one of my favourite comedians. He's very sharp and clever at observing people, including himself and showing us how hilarious our everyday lives can be. I've laughed hard at many of Michaels jokes/skits.
After exhausting YouTube and purchasing his DVD's this ebook was a must have.
Michael begins his story with his parents and how they met and from there takes us on the whole journey from his birth right through to, finally, his incredible success!
The interactive videos through the ebook bring a lot of the reading to life, although there are many links that you cannot view due to copyright which is disappointing.
In Michaels story, however, what resonates strongly in his life, before he reached the highest pillars of success, is the struggle he went through to finally become the success he is now. I really felt there would have been many a time that common sense and reason could have kicked in and changed his course But his sheer determination and grit to succeed in life and love are truely inspirational.
I haven't seen Michael perform live yet. I missed out last year when he toured here in Australia. But after reading his story, seeing him perform live has gone straight to the top of my bucket list!
Great read.
Read more
2 people found this helpful
Helpful
Report abuse

suzanne vandenberg
5.0 out of 5 stars A brilliant, entertaining and funny read!
Reviewed in Australia on 2 August 2020
Verified Purchase
Anyone who is interested in humor and or comedy should read this! All is not what it seems and Michael tells it like it is! Beautifully written, funny, sad, takes you through the whole gamut of emotions but I defy anyone to not absolutely and totally love this book - and in the end - the genius, that Michael is.
Read more
Helpful
Report abuse

KRW
3.0 out of 5 stars Yes but no
Reviewed in Australia on 4 April 2021
Verified Purchase
I adore watching Michael’s shows. Unfortunately his book didn’t come across as well. His inexperience and lack of basic knowledge of women comes across as with a slight misogynistic air. Harmless, but cringe-worthy in some parts. Still love to watch his shows though as he IS very funny.
Read more
Helpful
Report abuse

Suz
5.0 out of 5 stars Highly entertaining!!
Reviewed in Australia on 5 December 2013
Verified Purchase
This was a great read! Having only recently become familiar with his comedy, I am such a huge fan of Michael's shows! When I came across his book, I had to get it. It did not disappoint!
It is so easy to read, he draws you in with warmth, humor, affection and has a real knack for storytelling. He is such a likeable fellow and I love how much he worships his family, esp his beautiful wife.
If you're a fan, you need to read this, he has an amazing story of how he got to where he is today, written so entertainingly well.
Read more
One person found this helpful
Helpful
Report abuse

Sazz
5.0 out of 5 stars Amazing!
Reviewed in Australia on 4 December 2021
Verified Purchase
If you want to pick up your spirits and have a laugh, Life and Laughing is an excellent book to read. I will definitely be re-reading this one.
Read more
Helpful
Report abuse

LS9
5.0 out of 5 stars Laugh out loud
Reviewed in Australia on 26 March 2018
Verified Purchase
A great read. It is hard to believe that Michael had such a tough time getting where he is today. Got lots of laughs out of this.
Read more
Helpful
Report abuse

Dishy
5.0 out of 5 stars Loved every page
Reviewed in Australia on 23 February 2020
Verified Purchase
Doesn’t disappoint, a real insight into the boy that became Michael McIntyre. All the embarrassment of adolescence, the sadness of loss, and the joy of love.
Read more
Helpful
Report abuse
See all reviews

Amazon Customer
5.0 out of 5 stars Loved it - never have I laughed so much at a book
Reviewed in the United Kingdom on 8 December 2020
Verified Purchase
I like MM, not exactly a fan, but whenever he’s been on TV he is very entertaining and very, very funny. I wanted to read his latest book, but thought I’d go back to his first book to remind myself of where it all began.

I can honestly say that I have never laughed so much whilst reading a book, or had to wipe away tears of laughter. My husband kept asking me what was so funny - I couldn’t speak for laughing. The scene in his nursery school when a fellow pupil had had an ‘accident’ which caused a stink. I could actually picture the scene as I was reading it. Also MM’s reference to his family and him wanting to speak to them, but could only manage ‘ma, da’ and ‘shum’. He’s a great story teller.

He tells a hilarious story of inviting his half brother Billy to stay in his hotel room during a comedy festival in Montreal. It would appear to everyone that Billy was more like something from Pretty Woman, rather than a visiting relative. Unfortunately MM had to spoil the story by telling us he slipped Billy ‘a couple of hundred quid’. OK this made the story even funnier, as the handing over of money was seen by others BUT he didn’t have to mention the amount, or that it was money. I wonder how Billy feels reading it/hearing about it.

I’ve not yet finished, MM’s dad’s career is going well and I’m really having a great time reading, laughing and wiping my eyes. The last time I laughed like this was seeing Count Arthur Strong at one of his I’ve shows.

I do think the editor should have maybe done away with references to his rich gran (OK it’s funny), his dad having an enormous house with 35 acres - not everyone would warm to that.
Read more
2 people found this helpful
Report abuse

Esmie
5.0 out of 5 stars What a Hoot!
Reviewed in the United Kingdom on 23 September 2021
Verified Purchase
This extra fine comedien is a riot on stage, and he translates to the written page in a style which seems, to begin with, both prosiac and lavish! His story becomes increasingly compelling as you slowly realise that his 'different' childhood with an absent comedien script writer father is what lures him on to the footlights -alongside his lengthy courtship of his wife-to-be. His development as a comedien is one facet of his life which 'takes off' almost in sync with his marriage. Delightful.
Read more
One person found this helpful
Report abuse

Tania Thomas
5.0 out of 5 stars Being Human
Reviewed in the United Kingdom on 11 December 2021
Verified Purchase
This book was so down go earth, so clearly written and hugely funny. Micheal writes so well, it makes you feel that you are in the opposite chair listening to him tell you his life story, no-one else around its just you and him, you follow him emotionally on his rollacoster ride, of his life so far. Thank you Micheal.
Read more
One person found this helpful
Report abuse

Karen en España
5.0 out of 5 stars Great read!
Reviewed in the United Kingdom on 11 June 2018
Verified Purchase
Michael McIntyre, like many other people I’m sure is one of my favourite comedians. One always imagines that these stars just make it to fame and fortune overnight and it was fascinating to read of his often humiliating and demoralising rise to stardom, told with good humour and humility.

Most heartwarming was to read of his struggles with debt while working as a jobbing comedian but being wholly supported by the love of his life, (won’t say who in case some readers don’t already know) It’s hard to imagine him living in a one bedroom flat with a small baby struggling to pay bills. So glad they are still together!

Fame does not seem to have gone to his head and this book gave me many laugh out loud moments. One question Michael if you are reading this...who did your grandmother end up leaving her fortune to??
Read more
4 people found this helpful
Report abuse

Andrea Smith
4.0 out of 5 stars Compelling
Reviewed in the United Kingdom on 25 April 2013
Verified Purchase
Having bought this before I saw Michael live in concert last year (which I found slightly disappointing compared to his earlier material), I didn't have high hopes for this book. I was even more dubious when he devoted the first few pages to describing his office at home where he was writing the book in far too much detail.

Thankfully the book improves, and to give Michael credit this book is a very good read: we get a glimpse into the life of Michael McIntyre, with all its ups and downs. It's no holds barred and emotional. Although funny in parts, what makes this book special is that it shows how tough it is to be a stand-up comedian, and his struggle to make it in this field. I thought it was interesting and would definitely recommend it.

The only reason I haven't given it five stars is because I did find that in certain parts, he came across as quite arrogant, which I didn't really like. It may just be the way it came across in print - I'm sure if he was speaking this autobiography it would have been funnier - but that was the only thing that made this autobiography fall short of the full five stars.

Apart from that, if you are a McIntyre fan, this is a must read.
Read more
6 people found this helpful
Report abuse
See all reviews