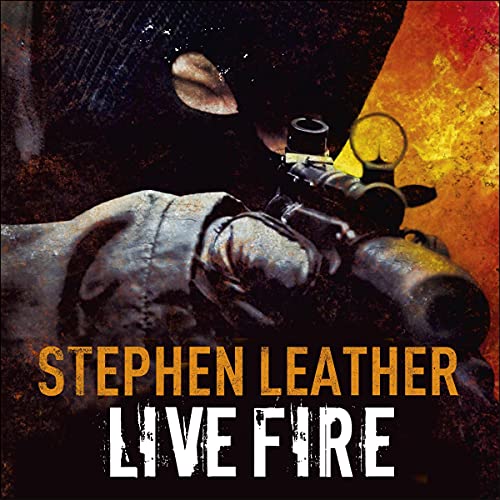 The sixth book in the best-selling Dan 'Spider' Shepherd series.

Mickey and Mark Moore are ordinary decent criminals - hard men who live by their own code and leaders of a gang that has made millions at the point of a gun.

But when Dan 'Spider' Shepherd is sent to infiltrate the tightly knit team of bank robbers, he discovers that he has more in common with them then he first thought. And that perhaps being a career criminal isn't the worst thing in the world.

As Shepherd and his Serious Organised Crime Agency colleagues plot the downfall of the Moore brothers, a more sinister threat stalks the streets of London. A group of home-grown Islamic fundamentalist fanatics embark on a campaign of terror the like of which Britain has never seen. Car bombs and beheadings are only the prelude of what they have planned.

And Shepherd is the only man who can stop them.

Switch between reading the Kindle book & listening to the Audible narration with Whispersync for Voice.
Get the Audible audiobook for the reduced price of $9.99 after you buy the Kindle book.
Final days - Don't miss out!
Learn more about membership
By completing your purchase, you agree to Audible’s Conditions Of Use and Privacy Notice.
Sold and delivered by Audible, an Amazon company

4.6 out of 5 stars
4.6 out of 5
629 global ratings
How are ratings calculated?
To calculate the overall star rating and percentage breakdown by star, we don’t use a simple average. Instead, our system considers things like how recent a review is and if the reviewer bought the item on Amazon. It also analyses reviews to verify trustworthiness.

There are 0 reviews and 6 ratings from Australia

The sixth book in Stephen Leathers series of books featuring SOCO undercover officer Spider Shepherd. Drawing extensively on his military and SAS experience Shepherd is able to infiltrate areas of criminal activity in a way that both thwarts the crime and brings criminals to justice.

In this book Shepherd is sent to Pattaya in Thailand to infiltrate a gang of bank robbers who have carried out a number of successful robberies in the United Kingdom. Using the cover of a robber forced to flee Britain Shepherd slowly works at establishing a relationship with his proposed targets.

Working on the premise that nothing works within a vacuum Leather also develops a theme whereby a group of British Muslims seek to exercise jihad through the planning and execution of a dramatic terrorist attack within the United Kingdom.

Although both events are not linked directly as time passes and plans progress they become much closer to each other. In the end Shepherd faces a dilemma, namely, completing his stated mission or seeking to stop a terrorist attack which could kill hundreds.

Leather has created a fast-moving thriller which builds up to a level of tension culminating in a dramatic conclusion. Along the way he describes the difficulties in establishing and maintaining a cover persona, the complexities of Stockholm Syndrome and the politics of effective and achievable law enforcement.

chrisc
4.0 out of 5 stars Another enjoyable Spider Shepherd Thriller
Reviewed in the United Kingdom on 27 June 2017
Verified Purchase
I really enjoy the Spider Shepherd series of books. Stephen Leather proves time and again that he is an exceptional story teller with novels that are real page turners and keep you on the edge of your seat always with an unusual twist occupying the last few pages. Mr Leather has developed a formula when describing the Spider thrillers, one which leads to late nights because I can't put the book down usually. The situations Spider finds himself in are plausible, he is ex-SAS so a tough soldier but one who also demonstrates a conscience and the villains and terrorists he is pitted against are frighteningly believable.
Read more
Report abuse

EP
5.0 out of 5 stars Fast and Furious
Reviewed in the United Kingdom on 26 January 2022
Verified Purchase
From page one the story grips you and is one of those books that you can't put down until the end.
Read more
Report abuse

Catharine10
5.0 out of 5 stars Def up to standard.
Reviewed in the United Kingdom on 21 July 2017
Verified Purchase
Very enjoyable book...two stories in tandem. The interlinking is spot on and some of the villains surprisingly sympathetic. Would've liked the very last paragraph issue to be resolved better! Up to Stephen Leather's usual high standard.I like his Nightingale books too and the different gendres are thrilling and pageturning. Great characterisation in all his books. Love them.
Read more
Report abuse

Disenfranchised
5.0 out of 5 stars Edge of the seat stuff
Reviewed in the United Kingdom on 26 August 2018
Verified Purchase
Stephen Leather book has a sting in the tail. No I am not going to say what it is. What I can say is the book takes the reader into the new costa del sol and it’s criminal fraternities and that alone makes fascinating reading. Then there is the explosive finale - but I will leave you to discover that. Peter allen
Read more
Report abuse
See all reviews