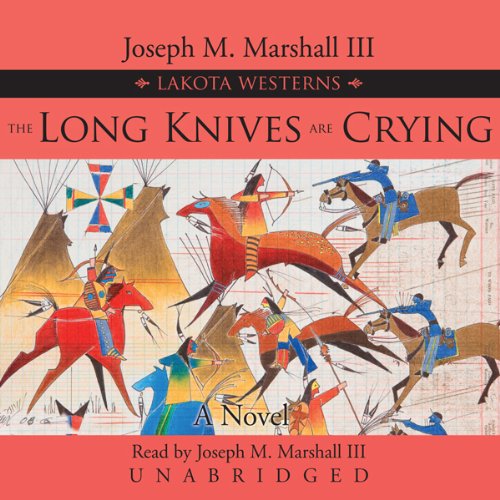 The Long Knives Are Crying: A Lakota Western

Joseph M. Marshall III (Author, Narrator), Blackstone Audio, Inc. (Publisher)
4.9 out of 5 stars 32 ratings
See all formats and editions
Sorry, there was a problem loading this page. Try again.
The second novel in Joseph M. Marshall III's acclaimed Lakota Western series begins in 1875, as Sitting Bull gathers thousands of Lakota to face the growing problem of white incursion. What follows is a sweeping tale of the Battle of the Little Bighorn, including the days and weeks leading up to the conflict and the remarkable defeat of General George Armstrong Custer and the Seventh Cavalry.

Told for the first time from the Native perspective through the eyes of Lakota warrior Cloud, the story also weaves in the lesser-known but strategically important Battle of the Rosebud and the uncertain future that faced the Lakota following victory. Once again, Marshall infuses the story with his unique voice and eye for detail, creating a page-turning Western with a style of its own.

Read more
©2008 Joseph M. Marshall III (P)2009 Blackstone Audio, Inc.
Previous page
Next page
Learn more about membership
By completing your purchase, you agree to Audible’s Conditions Of Use and Privacy Notice.
Sold and delivered by Audible, an Amazon company

4.9 out of 5 stars
4.9 out of 5
32 global ratings
How are ratings calculated?
To calculate the overall star rating and percentage breakdown by star, we don’t use a simple average. Instead, our system considers things like how recent a review is and if the reviewer bought the item on Amazon. It also analyses reviews to verify trustworthiness.

Booklist Princess
5.0 out of 5 stars History at your fingertips.
Reviewed in the United States on 26 August 2019
Verified Purchase
I have read and re-read this book so many times.Marshalls books are the end all of Native American history.The details of day to day life and the heart of village life are out standing.The fleshing out of the characters takes you right into their lives.
My only problem is that there is not a movie or dvd.
Read more
One person found this helpful
Report abuse

Lindell R. Doty
5.0 out of 5 stars History from a different perspective.
Reviewed in the United States on 25 March 2010
Verified Purchase
A different historical view of the battle of the little bighorn. If you like stories of the west with a historical background you will like this book. He is a Lakota, Sioux. You will want to read his books about events in the west and his other novels about those events. I have read the ones I am aware of and fine his perspective interesting. There is an obvious slant, but not anymore than one would expect. If you had relatives or close ties with a white soldier who died there, I would suspect some bias from you too. Overall it is a great read. Recommend it and Him.
Read more
3 people found this helpful
Report abuse

Joseph Dimaggio
5.0 out of 5 stars A very good book
Reviewed in the United States on 30 March 2021
Verified Purchase
A very good read! For me, it felt like I was there with the characters. Couldn't put it down. Joseph Marshall is an excellent writer.
Read more
Report abuse

einar
5.0 out of 5 stars Outstanding !
Reviewed in the United States on 10 December 2009
Verified Purchase
Joe Marshall does it again with this novel about the Greasy Grass. He tells the Lakota side of history of the so-called Custer's Last Stand. Joseph Marshall is an American treasure. He not only writes inspirational books, but his historical fiction stands alone. His portrayals of Crazy Horse and Sitting Bull bring to life two great American heroes. A must-read novel !
Read more
5 people found this helpful
Report abuse

nikki
5.0 out of 5 stars Wonderfully written.
Reviewed in the United States on 21 April 2013
Verified Purchase
I've read 2 books by this Author and I'm ordering more. This book is so well written and gives a complete different perspective on the events. I highly recommend this to anyone interested in honest History.
Read more
One person found this helpful
Report abuse
See all reviews