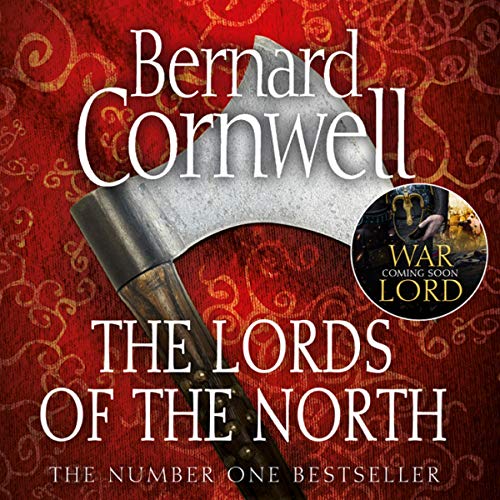 The Lords of the North: The Last Kingdom Series, Book 3

Enter a world where bloody battles and heroic deeds combine in the historic struggle to unite Britain in the face of a common enemy. The third instalment in Bernard Cornwell's King Alfred series, follows on from the outstanding previous novels The Last Kingdom and The Pale Horseman.

The year is 878 and the Vikings have been thrown out of Wessex. Uhtred, fresh from fighting for Alfred in the battle to free Wessex, travels north to seek revenge for his father's death, killed in a bloody raid by Uhtred's old enemy, renegade Danish lord, Kjartan.

While Kjartan lurks in his formidable stronghold of Dunholm, the north is overrun by chaos, rebellion and fear. Together with a small band of warriors, Uhtred plans his attack on his enemy, revenge fuelling his anger, resolute on bloody retribution. But, he finds himself betrayed and ends up on a desperate slave voyage to Iceland. Rescued by a remarkable alliance of old friends and enemies, he and his allies, together with Alfred the Great, are free to fight once more in a battle for power, glory and honour.

The Lords of the North is a tale of England's making, a powerful story of betrayal, struggle and romance, set in an England torn apart by turmoil and upheaval.

5.0 out of 5 stars
5 out of 5
2 global ratings
How are ratings calculated?
To calculate the overall star rating and percentage breakdown by star, we don’t use a simple average. Instead, our system considers things like how recent a review is and if the reviewer bought the item on Amazon. It also analyses reviews to verify trustworthiness.

There are 0 customer reviews and 2 customer ratings.