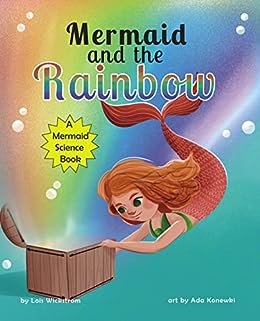 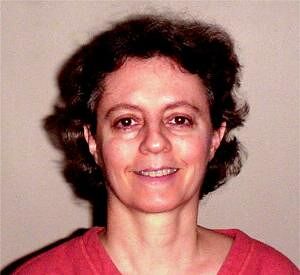 Maia's Imaginary Friend is a Mermaid. Her best friend Fig can't see her.

But Fig and Trezzie both love science. Trezzie loves to collect trash that people leave on the lakeshore. She keeps her finds in her treasure box. They come in handy for learning scienc. Maia, Fig and Trezzie swap science tricks using treasures from the mermaid's secret box. Best of all, they make a rainbow with a mirror, a piece of paper, and a glass of water.

Together, they make a great team.

Another entertaining and informative blend of science, activities, and entertaining story by children's author Lois Wickstrom, "Mermaid and the Rainbow" is a picture book featuring the illustrations and artwork of Ada Konewki. Fun and informative for young readers, "Mermaid and the Rainbow" is especially appropriate and recommended for family, elementary school, community library Marine Life science collections.

Lois Wickstrom lives in a world where imaginary playmates are real. She doesn’t remember being born, so she finds unbirthdays are more exciting than the official once-a-year date on the calendar. She’s taken so many science classes that she believes science is the solution to almost every problem, including the dilemmas in fairy tales.

She writes by herself. She writes with co-authors. She asks illustrators what they would like to draw. If she ever writes her autobiography, the title will be My Life as a Group Project.

Her mother used to get angry with her for daydreaming. Her little sister picked on her. So she lived in books and wrote her own stories in which the bad-guys made sense, and the good-guys had a chance. As she has grown older, her imagination has grown weirder. Even she doesn’t know what she will write next.

4.6 out of 5 stars
4.6 out of 5
23 global ratings
How are ratings calculated?
To calculate the overall star rating and percentage breakdown by star, we don’t use a simple average. Instead, our system considers things like how recent a review is and if the reviewer bought the item on Amazon. It also analyses reviews to verify trustworthiness.

Colourful illustrations with a story that is more a teaching of experiments and about friendships. I am unsure of the way this author writes. It felt like it quickly jumped from one experiment to another without any real lead in to each one or an explanation as to why things worked the way they did. The story is set for elementary age readers 4 - 7 who I am sure will love to try the things the characters do in the book and not worry about any lead ins.
Read more
Helpful
Report abuse

Mermaid and the Rainbow: Mermaid Science by Lois Wickstrom is an interesting, education, bright, and entertaining children’s story that teaches and inspires children to learn about science. We follow the cute characters on a bit of a science adventure, where the reader is shown science experiments and how to perform them…. So these are things that are easy to do and recreate at home. The characters are cute and quirky, and along with the colourful illustrations, they make the story come to life. The use of fantasy teamed with science, engages both imagination and learning. I think the story is a clever way to teach children about science and make it fun at the same time.
Happy reading!
Read more
Helpful
Report abuse
See all reviews

Mikaela
5.0 out of 5 stars Imaginative and fun!
Reviewed in Canada on 18 March 2022
Verified Purchase
I absolutely LOVED this book, especially because it incorporated science throughout. It took me about 30 minutes to read this to my niece as we had to stop and try out all of the experiments that were presented throughout. It is a great example that anyone can do anything they put their mind to by breaking down some of the stereotypes surrounding "who can do science?" Again, a truly imaginative and wonderful story. Highly recommend!
Read more
Report abuse

Anna Hirsch
4.0 out of 5 stars Wonderful characters
Reviewed in Canada on 19 March 2022
Verified Purchase
Not only did I find this book entertaining but it teaches children about science in a fun and interesting way. With fun and colourful characters, the book illustrates a simple science trick that the kids can try at home. A great way to introduce young children to enjoy science. An easy to read book that will keep children captivated.
Read more
Report abuse

Chrissy Spulak
5.0 out of 5 stars Fun book!
Reviewed in the United States on 23 March 2022
Verified Purchase
I have a twenty-month-old daughter and a 7 year-old niece and they both loved this book. The vivid and bright pictures attracted my daughter and she loved going through them. My niece is “going to be a scientist” when she grows up and of course she loved the content. Plus, she loves anything to do with mermaids, so that was a bonus! This book is so cute. Trezzie is a mermaid who wants to show her friends, Maya and Fig, how to make rainbows and do an experiment with paper, a glass, and the lake water. Beware, the children you read this with will want to do these things when they are done reading! I recommend this book if you have small children as it is fun to look at and will keep their attention.
Read more
Report abuse

Rachel Moss
4.0 out of 5 stars A cute story!
Reviewed in the United States on 19 March 2022
Verified Purchase
This was a cute read! I think children would really like it and it opens up a way to experiment with some, easy science projects. My only complaint is the character names. I was very confused because there was no explanation on which character was who. So that threw me off just a little bit. My daughter loved the bright pages, but she's 18 months so she didn't really understand or care for the story much, which is normal for her age! I can't wait to read this to her when she gets a little older and hopefully do some water experiments with her as well!
Read more
Report abuse

SaviLeeLind
5.0 out of 5 stars Engaging and fun!
Reviewed in the United States on 20 March 2022
Verified Purchase
This book definitely did its homework in getting kids attention. I brought it out for my 7 year old daughter to read for our bedtime story, and she fell in love as soon as she saw mermaids and learned it had experiments that she herself could try. This story was cute, fun, and educational. The Illustrations were bright and beautiful and the story itself easily kept both my 3 year old and 7 year old engaged. This author and this book left an impression because as soon as we finished she wanted to go on Amazon to order more books from her!
Read more
Report abuse
See all reviews
Report an issue
Does this item contain inappropriate content?
Report
Do you believe that this item violates a copyright?
Report
Does this item contain quality or formatting issues?
Report