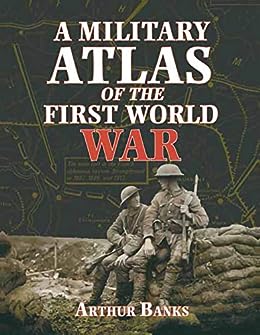 A Military Atlas of the First World War Kindle Edition

by Arthur Banks (Author) Format: Kindle Edition
See all formats and editions
Sorry, there was a problem loading this page. Try again.
This is a unique study of the conflict of 1914-18 on land, sea and in the air, through maps, diagrams and illustrations. Within the scope of some 250 maps, Arthur Banks has presented both broad general surveys of political and military strategy, and the most closely researched details of major individual campaigns and engagements. These are supplemented by comprehensive analysis of military strengths and command structures and illustrations.
Read more
Previous page
Next page
Due to its large file size, this book may take longer to download

This is a unique study of the conflict of 19 14-18 on land, sea and in the air, through maps, diagrams an d illustrations. The book corrects many long established errors and misconceptions. ' This book, although humbly titled "military atlas" provides all the necessary information on the first WW, from the motivations and politics, to weapon types, warfare tactics, railroad systems not only in Europe, but on all the periphal campaigns as well and by the way, you get the most comprehensive maps on the preluding balkan wars as well. The maps themselves are in black&white, but perfectly presented, with clear, sharp contrasts, so that it's very easy to read them even if you're without military background. The book succeeds in being the ideal starting point for anyone being even remotely interested in WW1. Every map is accompanied by a short summary of what's going on, most of the times even in the maps themselves which makes the information very easy to consummate. The real value of the book lies in the fact that it presents the actions and campaigns and politics without judging them, without being biased in any sort of way, may it be the old good vs. bad stereotype or the modern pacifistic viewpoint: It just provides information and what you do with it is up to you. Highly recommended. --David Kirk

This book is a very useful reference book, and is packed with information on all aspects of the war, not just the main fighting fronts. For example, it has maps of the German zeppelin raids over the UK. However, its big weakness is that the maps do not have height/contour and other topographic information, which is major problem for tactical studies. Anthony Liveseys atlas is better in this regard since its maps are in colour and are topographic, however it is weaker than Banks when loking at events outside the battle zones. They complement each other well. --By BCMH member

This book is an essential companion for every First World War scholar or simply interested reader. The maps accurately illustrate the developing of operations on land and sea (including some on the submarine and mine warfare). The air war is very well illustrated as far as the zeppelin operations are concerned; I would have liked also a detailed account of bombers-fighters operations on the various fronts. Maps for the african, italian, palestinian, macedonian and mesopotamian fronts are included, together with those relating to the Western and Eastern theaters. I have found the tables on the various weapons very useful and complete. As an Italian reader I have to confess that I found the maps about the Italian front rather sketchy. Even with this little (and ultimately not much important) flaws, this is a great book, providing the reader with a definitive guide on the Great War fronts and warfare. Read it together with B. Liddel Hart's or J. Keegan's books on the conflict and you will have a reasonably complete understanding of WWI from the military point of view. --By Simone BONECHI
--This text refers to an out of print or unavailable edition of this title.

This Atlas is very usefull to inderstand some (or all) facts about the first word war. The only thing to say is: It's all in blck and white. I like colors... But for this price is an excelent investment. I recomend!!! Sorry about my bad english, I'm from Brazil. --This text refers to an out of print or unavailable edition of this title.

4.3 out of 5 stars
4.3 out of 5
91 global ratings
How are ratings calculated?
To calculate the overall star rating and percentage breakdown by star, we don’t use a simple average. Instead, our system considers things like how recent a review is and if the reviewer bought the item on Amazon. It also analyses reviews to verify trustworthiness.

Jack Russell
5.0 out of 5 stars Very informative, innovative and an excellent reference resource.
Reviewed in the United Kingdom on 11 November 2020
Verified Purchase
Showing WWI through maps, detailing not just the many battles but other things, such as the route Franz Ferdinand took on that fateful day, the position of his assassins, the pre-war plans of the belligerents, and the voyage of von Spees squadron to name but a few. There are also detailed drawings on weaponry and concise explanations of the pre-war situation, each year of the war, as well as the war at sea and in the air. This is a very accessible and informative book which will act as a reliable resource for anyone who buys it.
Read more
3 people found this helpful
Report abuse

Mr D Humphries
5.0 out of 5 stars Something that I have always needed
Reviewed in the United Kingdom on 19 June 2017
Verified Purchase
I do not understand much detail about the First World War myself, but this book appears to be very well researched. Although the cartography appears a bit dated and primitive, it nonetheless clearly portrays the situation of the war as it unfolds. Some maps cleverly portray the movement of the Allied and German fronts on a daily basis, showing the rapid mobility of troops in some instances. I am currently reading a book of the action of the Royal Flying Corps and I am able to locate where the action was taking place by using the comprehensive index of place names, which has been brilliant. To fully appreciate all the research given to this atlas needs a careful study by the reader. I also like the additional pages showing the aspects of sea and air warfare and the illustrations of the various main weaponry used on both sides. As an ex-cartographer myself, this is a gem of a book showing the complex historic issues that took place. I am delighted that I discovered it's existence.
Read more
3 people found this helpful
Report abuse

Ignotus
5.0 out of 5 stars An essential book for anyone interested in the First World War
Reviewed in the United Kingdom on 2 August 2014
Verified Purchase
This excellent book arrived promptly from the seller. An essential book for anyone researching or just generally interested in the First World War and is kept on the desk at my elbow. It has been professionally indexed and it shows. The contents are divided by locations and also by date. The bulk of the book is given over to full page maps, all very clearly produced in black and white. There are sections on weapons, tanks etc. I can see its use as a course book, a research aid, but also ideal for a grandparent who needs to answer endless questions about The Great War. This book is an absolute gem.
Read more
3 people found this helpful
Report abuse