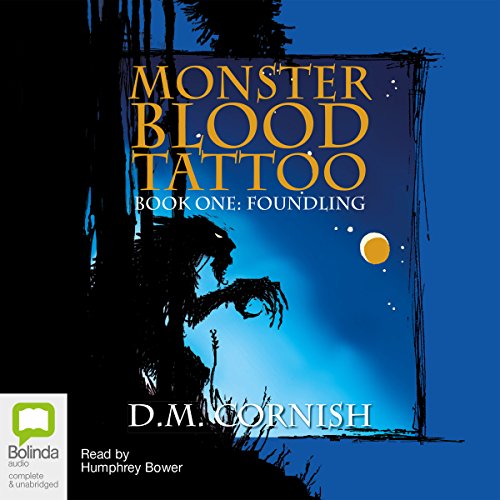 Set in the world of the Half-Continent - a land of tri-corner hats and flintlock pistols - the Monster Blood Tattoo trilogy is a world of predatory monsters, chemical potions and surgically altered people. Foundling begins the journey of Rossamund, a boy with a girl's name, who is just about to begin a dangerous life in the service of the Emperor. What starts as a simple journey is threatened by encounters with monsters - and people, who may be worse. Learning who to trust and who to fear is neither easy nor without its perils, and Rossamund must choose his path carefully.

Read more
©2007 D.M. Cornish (P)2008 Bolinda Publishing
Previous page
Next page
Final days - Don't miss out!
Learn more about membership
By completing your purchase, you agree to Audible’s Conditions Of Use and Privacy Notice.
Sold and delivered by Audible, an Amazon company

Tiff
3.0 out of 5 stars Almost Great
Reviewed in the United Kingdom on 7 March 2019
Verified Purchase
I enjoyed this first book in the series, OK it had an excessive amount of unnecessary made-up language that, in moderation, can add great world building flavour, but it didn't seem too bad. The last 15-20% of each book is made up of an 'explicarium' to.. explicate the bonkers amount of worldbuilding fervor that's gone into this series. It surely isn't explicated well enough within the text..

By the second book I was eyerolling and swearing at every new invention. It's like.. Gene Wolfe took a lot of speed and wrote Harry Potter. Even Tolkien released the Silmarillion as a separate book. Too much. Too much.

“Craumpalin was below, dispensing stomach-easing draughts for passengers suffering the queam –or sea-sickness;”
Yes. The excessive word invention is making me a little.. queamy.
Read more
Report abuse

Susan D
4.0 out of 5 stars A slow start, but worth hanging in there
Reviewed in the United Kingdom on 22 October 2013
Verified Purchase
At first, I was a bit annoyed with Rossamund for being so naive! But that totally fits his character, and through the book you see him change and grow as a person with his experiences. The language is a bit confusing with all the strange terms the author uses, but look past that and the story is really interesting. The second book is even better, by the way!
Read more
Report abuse

Charles A Searby
5.0 out of 5 stars Awesome vocabulary, truely delightful prose
Reviewed in the United Kingdom on 28 January 2017
Verified Purchase
The books were slow going for to start with, because of my laziness reading books with more basic language and vocabulary. The fact is that the language used is truly glorious, and I have read all three books now. Every quiet moment, and time I should have been sleeping too. It's not just for children, I'm 'mature', and I loved it. I'm hoping that more happens from this author in the world that has been created here.
Read more
Report abuse

David Jebb
3.0 out of 5 stars Fun kick-off to new trilogy
Reviewed in the United Kingdom on 12 June 2007
Verified Purchase
I saw some of the illustrations for D.M. Cornish's new book, The Foundling, and was intrigued by the world he had created, so I bought a copy. It's the story of Rossamünd, a boy with a girl's name. He is a foundling, or orphan, who is given a job as a lamplighter and must make his way to a new city to take up his position. However, the Half-Continent, where he lives, is a place of monsters and bogles ready to tear any human apart as soon as he or she steps outside the safety of their cities.

The Foundling is rather like what Dickens would have written had he been a fantasy writer in the 21st century. There is some Victorian steampunk charm mixed in with menace and grit. It is a mixture of the historically familiar and the imaginatively fantastic.

D.M. Cornish has created the world of the Half-Continent completely from his imagination- people, countries, cities, mosters, terminology, vocabulary, and usually these are things I love in my fantasy. This is why I love Dune by Frank Herbert and The Keltiad by Patricia Kennealy-Morrison (despite the latter's blatant use of Mary Sue and of fiction as wish-fulfillment). However, here, I needed to look at the glossary once too often to remind myself what was going on. This was definitely enjoyable, but is too idiosyncratic at first glance. This is a world for people planning on becoming die-hard Rossamünd fans.

As with a lot of new fiction aimed at younger audiences, I feel that the marketing is trying to promote it as the new Harry Potter. This is nothing like J.K. Rowling's series, but perhaps the publishing house, and not the author, is trying the catch onto the "next best thing", the next mania with everyone using invented words that enter into everyday speech.

The Foundling is interesting and fun, but I will be waiting for the next volume, Lamplighter, to come out in paperback.
Read more
5 people found this helpful
Report abuse

sam
5.0 out of 5 stars good
Reviewed in the United Kingdom on 29 March 2013
Verified Purchase
was super easy to put onto my kindle and had no issues with the quality of the book. easy to read
Read more
Report abuse
See all reviews