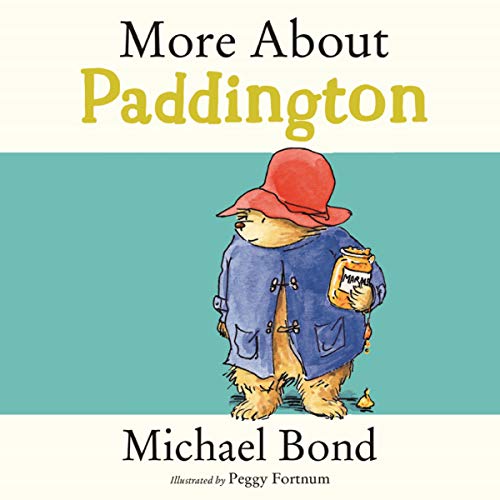 Michael Bond (Author), Stephen Fry (Narrator), HarperCollins Publishers Limited (Publisher) & 0 more
4.8 out of 5 stars 252 ratings
See all formats and editions
Sorry, there was a problem loading this page. Try again.
"Bears like Paddington are very rare," says Mrs Bird, "and a good thing too, or it would cost us a small fortune in marmalade."

It's a good thing for lots of reasons that bears like Paddington are rare. Whether it is his attempts at home decorating, detective work, or photography, the bear from Darkest Peru causes his own special brand of chaos.

Switch between reading the Kindle book & listening to the Audible narration with Whispersync for Voice.
Get the Audible audiobook for the reduced price of $3.99 after you buy the Kindle book.
Last chance - Ends Thursday!
Learn more about membership
By completing your purchase, you agree to Audible’s Conditions Of Use and Privacy Notice.
Sold and delivered by Audible, an Amazon company

4.8 out of 5 stars
4.8 out of 5
252 global ratings
How are ratings calculated?
To calculate the overall star rating and percentage breakdown by star, we don’t use a simple average. Instead, our system considers things like how recent a review is and if the reviewer bought the item on Amazon. It also analyses reviews to verify trustworthiness.

M. Dowden
5.0 out of 5 stars The Fun Continues
Reviewed in the United Kingdom on 24 December 2020
Verified Purchase
Paddington Bear is everyone’s favourite bear, along of course with his slightly more famous colleague, Winnie-the -Pooh, both who have been entertaining young and old for years, and both British creations. With immigration still being a hot potato at the moment though, do not worry as I have put my foot down and told Priti Patel in no uncertain terms that Paddington is to be given full British citizenship, no questions asked. To think that she was going to sign a deportation order, sending him back to Peru, and mainly due to jealousy, because she knows he could do a better job as Home Secretary than she can.

This is the second book in the series, and first published in 1959, and our popular bear is ready to get (unintentionally) into more scrapes. Here we see him then taking up photography, doing some decorating, becoming a sleuth, dealing with Bonfire Night, snow and Christmas, all in his own inimitable way. Illustrated throughout by Peggy Fotnum, Michael Bond’s tales remain timeless, because as such this is really a group of interconnected short stories, rather than a conventional novel.

These books are really timeless entertainment, and not just for children. Some of Paddington’s well-intentioned but alas slightly awry ideas and actions are things that perhaps many of us have done at one time or another, thus resulting in some at the time serious, but when you look back on it, comic mayhem. Paddington as such always seems to remain so polite, although he does have that intimidating stare of his, and thus we are offered well written clean fun that is ideal for all the family.

It is interesting to note, that not only is he famous but that he has two statues erected of his image, one of course at Paddington Station, and the other actually in Lima, Peru. Surely these are statues that no one will want to pull down. One thing I should mention as an idea for parents with little ones, and that is to teach your children the Paddington Bear stare, as my mother taught us when we were little. Once this has been perfected it can be used to great effect on others. I have been told that I had intimidated a boss once and was threatening. I was just staring at her as she told a series of lies, and she became aggressive as she tried to outstare me, which she could not do.
Read more
4 people found this helpful
Report abuse

Kindle Customer
5.0 out of 5 stars I have always loved Paddington because he tries so hard but never quite gets it right
Reviewed in the United Kingdom on 2 March 2021
Verified Purchase
I felt rather like that when I was small too.

In this particular volume of autobiography he tries his paws at photography, 'home improvements ' and detection. Discovers small Peruvian bears and snow are not always necessarily a good mix and experiences Bonfire night and Christmas for the very first time.
Read more
Report abuse

CatWhisperer
5.0 out of 5 stars Pure genius
Reviewed in the United Kingdom on 27 July 2020
Verified Purchase
I have always enjoyed Paddington Bear books but re-reading this as an adult makes me realise what a clever writer Michael Bond was-suBearb!!
Read more
2 people found this helpful
Report abuse

DH 88 Comet
5.0 out of 5 stars Oh Mr. Bond!
Reviewed in the United Kingdom on 22 January 2013
Verified Purchase
The Paddington books were the first stories I can remember. Reading them again the memories came flooding back, they are just SO GOOD.
I particularly wanted the books with the original (and best), Peggy Fortnum illustrations, which are as good as I remember.

My only criticism, inflation has taken over and Paddington's sixpence is now ten pence!

I can't recommend these books highly enough to everyone.
Read more
One person found this helpful
Report abuse

Francesca Lee
5.0 out of 5 stars Love it
Reviewed in the United Kingdom on 16 May 2021
Verified Purchase
I loved this book and recommended it to young readers.It's about a young bear who causes a lot of chaos but in the end is a very friendly bear
Read more
Report abuse
See all reviews