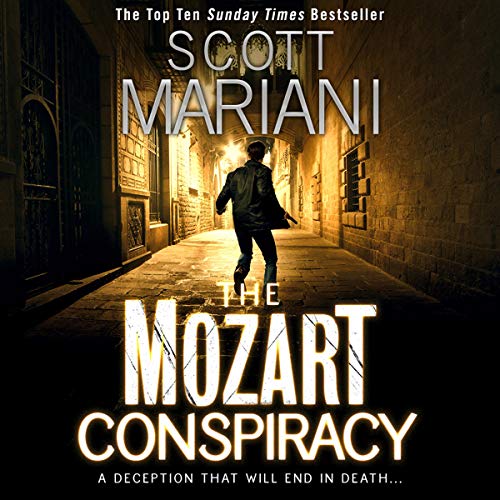 From the number-one best-selling author.

Former SAS operative Ben Hope is running for his life. Enlisted by the beautiful Leigh Llewellyn - world-famous opera star and Ben's first love - to investigate her brother's mysterious death, Ben finds himself caught up in a centuries-old puzzle. The official line states that Oliver died whilst investigating Mozart's death, but the facts don't add up.

Oliver's research reveals that Mozart, a notable freemason, may have been killed by a shadowy and powerful splinter group of the cult. The only clues lie in an ancient letter, believed to have been written by Mozart himself.

When Leigh and Ben receive video evidence of a ritual sacrifice being performed by hooded men, they realise the sect is still in existence today...and will stop at nothing to remain a secret.

From the dreaming spires of Oxford to Venice's labyrinthine canals, the majestic architecture of Vienna, and Slovenia's snowy mountains, Ben and Leigh must forget the past and race across Europe to uncover the truth behind The Mozart Conspiracy.... An electrifying and utterly gripping must-listen for fans of Dan Brown, Sam Bourne and Ludlum's Bourne series.

4.5 out of 5 stars
4.5 out of 5
987 global ratings
How are ratings calculated?
To calculate the overall star rating and percentage breakdown by star, we don’t use a simple average. Instead, our system considers things like how recent a review is and if the reviewer bought the item on Amazon. It also analyses reviews to verify trustworthiness.

Kjane
TOP 500 REVIEWER
3.0 out of 5 stars Fast paced but frustrating ending.
Reviewed in Australia on 23 April 2022
Verified Purchase
This is a second book in a series and I quite enjoyed the first book but the ending of this book left me feeling quite disappointed and I think I will put this series to rest here.
Ben Hope is a retired SAS soldier who uses his 'retirement' and vast resources to track down missing children (his own sister having disappeared when he was a child). He is contacted by the sister of a friend that he served with. Oliver died in a reportedly drunken accident 12 months prior. Now his sister, Leigh is being pursued and it appears to be related to research Oliver had been doing on Mozart before he died.
This story is similar to those like [book:The Da Vinci Code|968], in this case it is an Austrian based secret society called the Order of Ra. There is a lot of violence in the book and look many heroes, Ben suffers injuries but is unstoppable in the most dire of circumstances.
Read more
Helpful
Report abuse

Sharich
3.0 out of 5 stars Plenty of action but predictable
Reviewed in Australia on 31 July 2020
Verified Purchase
The promotional blurb suggests a Da Vinci Code type puzzle, but this does not deliver.
There was plenty of action and it moved at a decent pace, but a bit too predictable.
It was an OK read but I won't be rushing to buy more in the series.
Read more
Helpful
Report abuse

Webster99
5.0 out of 5 stars Really enjoyable
Reviewed in Australia on 22 September 2019
Verified Purchase
Really enjoyed this book, it was fast paced with lots of action and interesting characters. A real page turner that I found hard to put down.
Read more
One person found this helpful
Helpful
Report abuse

jennifer hale
4.0 out of 5 stars Four Stars
Reviewed in Australia on 25 January 2018
Verified Purchase
I am a real Ben Hope fan. Can't put the book down once I start it.
Read more
One person found this helpful
Helpful
Report abuse

Van Patten
4.0 out of 5 stars Fast paced and riveting. Just don’t stop to think about it too much!
Reviewed in the United Kingdom on 19 February 2022
Verified Purchase
When staying at a cottage in the Isle of Wight one summer holiday, I decided in the evening I’d pick up and read one of the books on the owner’s bookshelf, and the novel ‘The Bach Manuscript’ by Scott Mariani was the one I chose. Well given the holiday lasted seven days I managed to complete it by Day 5. For me, it did exactly what the blurb said - deliver a fast paced action thriller which is a consistent page Turner. It’s the formula Lee Child had for Jack Reacher and for the protagonist of Mariani’s novel, Ben Hope, similar flaws apply. Having remembered how much I enjoyed the ‘Bach manuscript’ I decided I’d head back to the beginning of the story and came up with this, number 2 in the series, the ‘Mozart Conspiracy’

For those unfamiliar with the series or the writer, Mariani’s lead character, former SAS man Ben Hope is a loose cannon who does challenging retrieval’s of kidnap victims, breaking up criminal Gangs or other dangerous jobs which utilise his skills from his time in the SAS. He’s a flawed hero to be sure but he usually finds a way out of whatever sticky situation he finds himself in. In his novel, he’s contacted by an old flame, Leigh Llewelyn, a successful opera singer whose brother served with Hope but who has apparently been executed in a ritualistic style killing. What follows is a fast moving romp similar to a Jason Bourne style story (albeit a little less detailed/ labyrinthine than the Bourne book themselves) but it takes in an international conspiracy bent on global domination. Listen, the style is not ‘high culture’. This is entertainment, pure and simple. There was one particularly egregious twist where I was saying ‘really?’ But overall it was a very entertaining ride and if you like this genre, would thoroughly recommend. A four star work to be sure.
Read more
2 people found this helpful
Report abuse

Paul S
4.0 out of 5 stars A really engaging international thriller containing a hint of romance, plenty of intrigue and loads of non-stop action.
Reviewed in the United Kingdom on 23 July 2018
Verified Purchase
If you enjoy all action, international crime thrillers that are easy to read, contain an element of romance and plenty of intrigue and daring exploits, then you will probably enjoy 'The Mozart Conspiracy'.
Ben Hope, the indestructible hero of the story goes in search of the killer of his ex army buddy Oliver Llewellyn. Oliver had been writing a book about Mozart's death in which he purports that Mozart may have been murdered. While conducting his research he is seen witnessing a horrific execution which leads to his murder. His sister, Leigh, a famous opera singer, announces in an interview that she will continue Oliver's work and complete his book but soon realises her life may now also be in danger. So, she contacts an old flame, Ben Hope, for help.
There are plenty of twists and turns as the plot of this thriller unfolds (as well plenty of intrigue). The way the story unfolds made me think it could easily be made into a terrific film.
However, I was disappointed by one rather convenient 'event' that occurs part way through the novel when, faced with almost certain death, the plot takes a totally unexpected turn that enables our hero to fight another day. I won't reveal any details as I do not want to reveal the plot but even allowing for this being a fictional story, the 'event' was just a mite too contrived and convenient for my liking. Hence my four star rating for this novel.
Overall though, The Mozart Conspiracy is a really engrossing story, told at a relentless pace and it has certainly whetted my appetite to read the next novel in the Ben Hope series.
Read more
4 people found this helpful
Report abuse

JW
5.0 out of 5 stars Excellent series of books well worth reading and will keep you gripped!
Reviewed in the United Kingdom on 16 August 2020
Verified Purchase
I have read numerous Scott Mariani books now. I initially made the mistake of reading one of the later books, though this did not matter and thoroughly enjoyed it. I am now starting from the beginning to make sure I read them all!

I am an avid reader and love a book which keeps me gripped and takes me into the world of the characters. These books certainly do this!

This was a particularly good one and gives you insight into the main characters. The book is full of twists and shocks and plenty of action.

Would highly recommend this series of books, looking forward to starting the next one.
Read more
2 people found this helpful
Report abuse

MR C.Robinson
4.0 out of 5 stars Another Good Ben Hope Book
Reviewed in the United Kingdom on 5 January 2014
Verified Purchase
Being A big fan of such authors as Dan Brown & Steve Berry I came across the Ben Hope series after purchasing the alchemists secret which was a good book I picked up the second novel in series with much anticipation. In this second novel Ben travels through France, Vienna & Venice investigating the death of one of his friends who was researching a book based upon the death of the renowned composer Mozart.
There a twists and turns at every page aided by a sinister cult who will do anything to stop the truth coming out, and the reappearance of an old enemy and a tragic end makes this book a real page turner. Mariani describes and sets a scene with great detail and the book is well researched, the only criticism I have of the book is that the book itself has very little with the Mozart himself apart from the mysterious letter he send just before his death in 1788, apart from that he's not really mentioned after that.
Overall a good page turner that excites with non stop action, i'm looking forward to reading the other Ben hope novels.
Read more
6 people found this helpful
Report abuse

rattyratbag
5.0 out of 5 stars Keeps you riveted from the first to the last page.
Reviewed in the United Kingdom on 8 September 2016
Verified Purchase
I remember very clearly writing my first review when I discovered Scott Mariani and could not wait to share his writing with the world.
Well here I am again, having started the series whilst on holiday again, I do remember certain parts of the books, but reading them for possibly the 3rd time, I still find myself captivated by his writing and clear description of the action unfolding, I do believe that I am there right in the middle of this world of Ben Hope.

When Ben receives a call from a beautiful and well known opera singer saying she is in trouble, his heart does a double take, the beautiful Leigh a girlfriend he left to continue his life and to keep her safe. Once he meets with her again, the old heart strings are pulled. Leigh's brother Oliver an old army pal of Ben's has died fallen through the ice whilst in Vienna- but not everything adds up - when Leigh starts looking through Oliver's possessions and does a TV interview and mentions this, she starts to be targeted.
Leigh and Ben's adventure takes them to Paris, Vienna and Ireland and never stops to keep you riveted from the 1st page to the last, their undying love is sparked again, but tragedy is not far behind.
Read more
4 people found this helpful
Report abuse
See all reviews