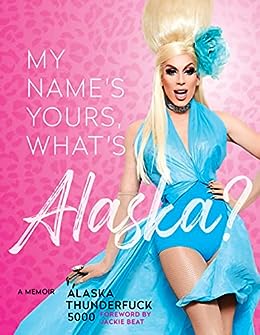 My Name's Yours, What's Alaska?: A Memoir Kindle Edition

Enjoy a great reading experience when you buy the Kindle edition of this book. Learn more about Great on Kindle, available in select categories.
Alaska Thunderfuck spills the tea on her meteoric rise from timid Pennsylvania kid to drag superstar in this intimate photographic memoir that will appeal to diehard Alaska admirers and broader drag fans alike.

Before RuPaul's Drag Race became a worldwide phenomenon, Drag was mostly an underground art form, performed by the daring and the quick-witted, with maximum energy and a minimal budget. This is the story of one of the galaxy's greatest queens, Alaska Thunderfuck 5000, as she transforms from wearing dresses made of trash bags because she has to, to wearing dresses made of trash bags because she wants to. Finally coming clean on her home planet (earth), this dishy, visual memoir tells the stories that shaped Alaska into an All Star: from prom king to the House of Haunt, to the very public breakup that almost destroyed her. Intimate and alluring with exclusive photography throughout, and illustrations by the author, My Name's Yours, What's Alaska? is the ultimate backstage pass.

LGBTQIA+ REPRESENTATION: LGBTQIA+ consumers will see their experiences and passions reflected in Alaska's authenticity and openness about her childhood struggles, and will be excited by a drag memoir that celebrates the whole story of queerness, not just the sassy, shady highlights.

GREAT GIFT FOR FANS OF RUPAUL'S DRAG RACE: Behind the scenes stories of Alaska's journey to RuPaul's Drag Race fame, alongside full-color photography of Alaska's iconic trash-glam looks throughout her career, will deliver the exclusive content fans crave.

"My Name's Yours is undeniably Alaska. It's a captivating read that feels as enjoyable and energetic as one of Alaska's shows. Fans familiar with her will hear her in every word on the page. Those who haven't had the joy of watching her perform on stage or screen will find a charismatic storyteller regaling you with how she wound up in this place."

"Alaska's memoir is a must-read for avid fans of [RuPaul's Frag Race]. From calling out fellow co-stars to sharing personal anecdotes, Alaska delivers an intimate gift, showing a more vulnerable side to the often flashy series."

"Now, in her new memoir My Name's Yours, What's Alaska?, the crowned (RuPaul Drag Race) All Stars 2 queen opens up about all facets of a life that made her beautiful, fashionable, and cost her lots and lots of money."

"One hilarious page after another, she offers up juicy details of her life between wordplay and sometimes shocking details."

"The library is open... and Alaska's book is on the top shelf!"

"The tea is hot in Alaska's new memoir."

"While the book brings a fair share of belly laughs, Alaska is also unafraid to face her past head-on with a candid account of her upbringing, her relationship (and public breakup) with fellow 'Drag Race' winner Sharon Needles and her drag journey."

"In this photographic memoir, we get a hilarious and brutally honest look at Alaska's life pre- and post-Drag Race fame. Alaska doesn't hold back, even from some of the most unflattering parts of her life. From her small town childhood to experimenting with form in drag to her messy public breakup, this memoir shares the story behind the drag queen with Alaska's signature humor. The beautiful images included will keep you coming back for more."

Alaska Thunderfuck 5000 is a drag performer, singer, and emancipated alien goddess from the planet Glametron. She competed on the fifth season of RuPaul's Drag Race and won the second season of Drag Race: All Stars.  --This text refers to the hardcover edition.

4.8 out of 5 stars
4.8 out of 5
54 global ratings
How are ratings calculated?
To calculate the overall star rating and percentage breakdown by star, we don’t use a simple average. Instead, our system considers things like how recent a review is and if the reviewer bought the item on Amazon. It also analyses reviews to verify trustworthiness.

AngelaDeNorth
5.0 out of 5 stars Amazing! A must-read!
Reviewed in the United Kingdom on 12 November 2021
Verified Purchase
I am a huge fan of drag and Alaska has always been one of my favorites. I loved Willam's book also however haven't really enjoyed the offerings from the U.K crowd. Bianca's book is also great but this is a really entertaining and tells you about how Alaska became the world class act he is today with humour and honesty. Love it read in a day as it had me hooked and not many books are like that for me. A must-read!
Read more
One person found this helpful
Report abuse

S.Cameron
5.0 out of 5 stars Reliable retailer.
Reviewed in the United Kingdom on 22 December 2021
Verified Purchase
If you’re a hard core drag race fan, you’ll love this book. NOT SUITABLE FOR UNDER 18s!
Read more
One person found this helpful
Report abuse

S
5.0 out of 5 stars Fantastically Engaging
Reviewed in the United Kingdom on 10 November 2021
Verified Purchase
Read it all today, so honest. Truly engaging and just interesting. A life so far from mine and still managing to make me feel. Really well done.
Read more
2 people found this helpful
Report abuse

Amazon Customer
5.0 out of 5 stars So good!!
Reviewed in Canada on 12 November 2021
Verified Purchase
I finished this book in one sitting. I literally couldn’t put it down!! I’ve been a fan of Alaska since 2014 (when I got to meet her and she was seriously the sweetest) but never really knew much about her life before Drag Race. In this book, she’s super candid about her “coming of age” into drag, her past relationship with Sharon and her successes. And the pictures were very cool (though the one thing I would’ve liked was captions for them!!). But honestly, a great read for any drag fan and esp Alaska fans!
Read more
Report abuse
See all reviews
Back to top
Get to Know Us
Make Money with Us
Let Us Help You
And don't forget:
© 1996-2022, Amazon.com, Inc. or its affiliates