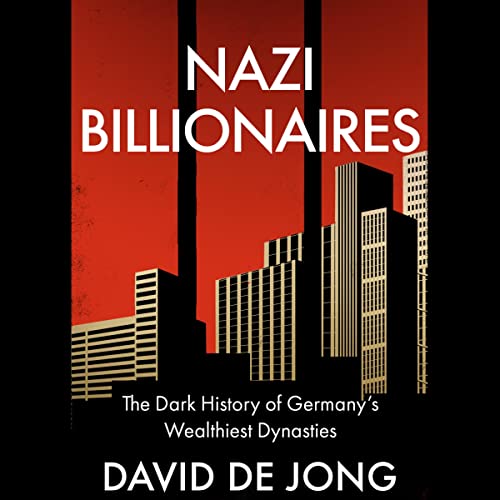 A groundbreaking investigation of how the Nazis helped German tycoons make billions from the horrors of the Third Reich and World War II—and how the world allowed them to get away with it.

In 1946, Günther Quandt—patriarch of Germany’s most iconic industrial empire, a dynasty that today controls BMW—was arrested for suspected Nazi collaboration. Quandt claimed that he had been forced to join the party by his arch-rival, Propaganda Minister Joseph Goebbels, and the courts acquitted him. But Quandt lied. And his heirs, and those of other Nazi billionaires, have only grown wealthier in the generations since, while their reckoning with this dark past remains incomplete at best. Many of them continue to control swaths of the world economy, owning iconic brands whose products blanket the globe. The brutal legacy of the dynasties that dominated Daimler-Benz, cofounded Allianz and still control Porsche, Volkswagen and BMW has remained hidden in plain sight—until now.

In this landmark work, investigative journalist David de Jong reveals the true story of how Germany’s wealthiest business dynasties amassed untold money and power by abetting the atrocities of the Third Reich. Using a wealth of untapped sources, de Jong shows how these tycoons seized Jewish businesses, procured slave labourers and ramped up weapons production to equip Hitler’s army as Europe burnt around them. Most shocking of all, de Jong exposes how the wider world’s political expediency enabled these billionaires to get away with their crimes, covering up a bloodstain that defiles the German and global economy to this day.

Switch between reading the Kindle book & listening to the Audible narration with Whispersync for Voice.
Get the Audible audiobook for the reduced price of $22.03 after you buy the Kindle book.
Learn more about membership
By completing your purchase, you agree to Audible’s Conditions Of Use and Privacy Notice.
Sold and delivered by Audible, an Amazon company

4.4 out of 5 stars
4.4 out of 5
295 global ratings
How are ratings calculated?
To calculate the overall star rating and percentage breakdown by star, we don’t use a simple average. Instead, our system considers things like how recent a review is and if the reviewer bought the item on Amazon. It also analyses reviews to verify trustworthiness.

There are 0 reviews and 19 ratings from Australia

Rob Matthews
5.0 out of 5 stars A shocking chapter in history
Reviewed in the United Kingdom on 2 June 2022
Verified Purchase
This is the story of Nazi industrialists who cheated Jewish colleagues and employed slaves literally on an industrial scale. We hear a lot about slavery these days, but not in the history of Volkswagen, BMW,etc. After the war these people got away with it. Expediency wins.
Read more
One person found this helpful
Report abuse

Paul Davies
4.0 out of 5 stars MAKES YOU THINK ABOUT BUYING GERMAN
Reviewed in the United Kingdom on 22 July 2022
Verified Purchase
This book was an eye opener and should be compulsory reading for anyone who thinks the past doesn't matter. I might have to find another brand of pizza...
Read more
2 people found this helpful
Report abuse

sally smith
5.0 out of 5 stars This is a brilliant, important and long overdue book
Reviewed in the United Kingdom on 16 May 2022
Verified Purchase
I could not put this book down. It's an important book which hopefully will shine some light and truth on a devastating era run by shocking industrialists committing unspeakable crimes. We need to thank David de Jong for his fantastic research. Everyone should read this book.
Read more
3 people found this helpful
Report abuse

S C Loughridge
5.0 out of 5 stars Incredible
Reviewed in the United Kingdom on 16 May 2022
Verified Purchase
Best book iv read this year. Fascinating on so many levels across generations. Love the ending too. Glad I don't drive a porsche...
Read more
3 people found this helpful
Report abuse

James Taylor-Rutt
5.0 out of 5 stars Interesting and informative
Reviewed in the United Kingdom on 9 August 2022
Verified Purchase
I had read other articles relating to how German companies operated during World War Two, but never in so much detail. Fascinating to see how Hitler persuaded these businessmen to come to his side.
Read more
Report abuse
See all reviews