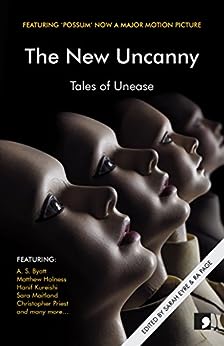 In 1919 Sigmund Freud published an essay that delved deep into the tradition of horror writing and claimed to understand one of its darkest tricks. Like a mad scientist, he performed literary vivisection on a still-breathing body of work, exploring its inner anatomy, and pulling out mysterious organs for classification. His aim: to present to the world a complete theory of ‘das unheimliche’, the uncanny.

In the spirit of this great experiment, 14 leading authors have here been challenged to write fresh fictional interpretations of what the uncanny might mean in the 21st century, to update Freud’s famous checklist of what gives us the creeps, and to give the hulking canon of uncanny fiction a shot in the arm, a shock to the neck-bolts...

'It’s not too great a stretch to see Comma as the literary equivalent of Factory Records.'
- The Herald, 2 Dec.

'Delightful and disturbing'
- The Independent on Sunday, 14 Dec.

'A masterclass in understated creepiness... a deliciously macabre collection that the old Austrian might well have enjoyed.'
- Book of the Week, Time Out, 12 Jan.

'If we need the uncanny – and I suspect we do – then we also need it updating... laudable.'
- Book of the Week, The Independent, 2 Jan.
Read more
Previous page
Next page

"Delightful and disturbing." --Independent on Sunday --This text refers to the paperback edition.

Sarah Eyre is an editor and a consulting editor for Comma Press. Ra Page edited The City Life Book of Manchester Short Stories and founded and edited Manchester Stories magazine. He is the deputy editor of City Life and a director of the Manchester Poetry Festival. --This text refers to the paperback edition.

4.3 out of 5 stars
4.3 out of 5
47 global ratings
How are ratings calculated?
To calculate the overall star rating and percentage breakdown by star, we don’t use a simple average. Instead, our system considers things like how recent a review is and if the reviewer bought the item on Amazon. It also analyses reviews to verify trustworthiness.

Des Lewis
5.0 out of 5 stars Almost as good as Tristram Shandy
Reviewed in the United Kingdom on 13 March 2021
Verified Purchase
The Un(heim)lich(e)Man(oeuvre)
Ian Duhig

“I like the way Joyce writes ‘lookingglass’ as one word; it seems to goggle back at you, reflecting itself and on itself.”

I share chronic iritis with Joyce. I have had it sporadically since I was 23, and I am now 73.
Isn’t 23 in ILLUMINATUS!
And 73 is the 21st prime number. Its mirror, 37, is the 12th and its mirror, 21, is the product of multiplying 7 and 3, and in binary 73 is a palindrome, 1001001, which backwards is 1001001.
Well, enough of MY connections. This ‘story’ is a massive compulsive virus at variance with word disassociation. It is the first extended stream of consciousness that I have ever understood and fully appreciated. Spreading through the narrator’s lifetime, detached from his mother, pushed by his pyramid oculist if occultist or Masonic Dad, and the narrator became a spy controlled by someone called Tyr, dry-stone walling, too, and reading Melmoth with a fisheye, and he studied with the Bradford Five. Told you, I am master of my reviewing brief.
This was indeed a highly infectious read of clause-connecting claws. A genius stream. Almost as good as Tristram Shandy that I have real-time reviewed on this site, as I have also Finnegans Wake. Even Oliver Onions, one of my favourite more obscure writers, was picked from the work’s net of spread allusions. A forerunner of the Liar’s Dictionary. So many allusions that have eluded this review, just the tip of the iceberg of them being adumbrated here, but I think I actually got all of them into the sump of my mind, AND I got the gestalt of the plot, too, despite not being a good plot-getter normally.

“Why does Plague get such a bad press? Aren’t they just a life form like any other?”

The detailed review of this book posted elsewhere under my name is too long or impractical to post here.
Above is one of its observations at the time of the review.
Read more
Report abuse

Rich H
5.0 out of 5 stars Great Unnerving Stories
Reviewed in the United Kingdom on 22 December 2017
Verified Purchase
A great selection of uncanny stories (which I got based on there being a Christopher Priest story in there, and was better value for money to get the whole book than the single story). And it doesn't let us down! Really weird, unnerving stories! And not blatant horror. Under the skin unnervy, not every scary at all, just that weird creepy sensation when you kind of think something is wrong, but aren't sure. Sometime when reading Amazon late at night. And you hear a noise. Or get a feeling. That creepy feeling along your back. You think you notice something amiss, or your perception picks up something incorrect in the universe. Like when you decide to follow to find out what's wrong, just a check, see if there's
Read more
2 people found this helpful
Report abuse

M C
3.0 out of 5 stars Not as uncanny as the old uncanny (but worth reading)
Reviewed in the United Kingdom on 26 November 2012
Verified Purchase
Not a bad collection of stories with some real highlights, but I can't say I felt any particular uncanniness about most of them.

I would probably recommend skipping the introduction, after reading it I felt some of the stories were a little contrived to fit into the guidelines, and in some ways I think the idea of the book is a little detrimental to the stories contained within. Maybe if I skipped the intro and turned the lights off I might feel differently...

Some were amusing but not very uncanny, some were both amusing and uncanny, and others were more serious. Probably the majority of them feature some kind of modern technology, gadgets, the interwebs, etc. which I guess is where the 'new' mostly comes from. When this is done right it really works but in other cases I think bringing such things into the story brings it back into reality and lessens the tension you might normally expect from a 'tale of unease'.

My favourite is probably continuous manipulation which does have an element of uncanniness to it.
I bought the book after searching for Christopher Priest, based on the strength of his more uncanny tales from the Dream Archipilego, primarily about the mysterious towers on Seevl, his effort was decent and the idea was amusing (and not set in the dream archipelago I might add, although they do have funny names...).
Tamagotchi and Seeing Double were also good

I could go on and talk about the rest but it's really for you to make your own mind up. I would still recommend the book but don't go in expecting oodles of unease.
Read more
2 people found this helpful
Report abuse

Amazon Customer
3.0 out of 5 stars Short Stories Not Horror Stories
Reviewed in the United Kingdom on 11 October 2011
Verified Purchase
I was initially a little disappointed with this anthology. I was expecting a modern take on the traditional gothic genre horror/ghost/supernatural stories . However you get just what it says on the tin, "Tales of Unease", stories which are disquieting and which give you an undefined sense of unease without ever reaching any full expression of horror.

They achieve this objective very well, they are skilfully written short stories, with strange themes that creep into your head leaving a disturbing uneasy feeling like a half-forgotten nightmare.

Some of the authors like Ramsay Campbell, A.S Byatt and Hanif Kureishi, are well known writers, other names are far less familiar. I would recommend reading the introduction first (which I usually skip), because it does give an interesting insight into how the assignment was defined, and Freud's classification of the themes in literature which make us uneasy (and his theories about why they make us feel this way).

So not quite what I expected, but still a well written, themed anthology that is definitely worth reading.
Read more
One person found this helpful
Report abuse

DrBenway
3.0 out of 5 stars Interesting stories bound in a mundane looking product.
Reviewed in the United Kingdom on 3 September 2020
Verified Purchase
Interesting stories inside, I mostly got it to read the Possum story, as I loved the film. The presentation leaves a lot to be desired, cheap looking, little design. That said it was not too expensive.
Read more
Report abuse
See all reviews
Report an issue
Does this item contain inappropriate content?
Report
Do you believe that this item violates a copyright?
Report
Does this item contain quality or formatting issues?
Report