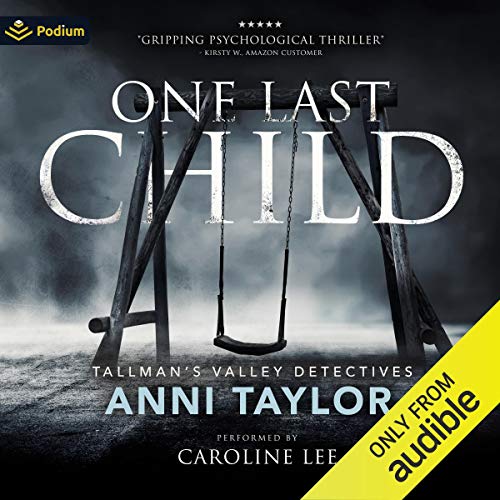 Five long-missing children are about to be returned.

It was summer in the mountains when five small children vanished from their nursery school picnic. The heat was stifling that day, the tinkle of an ice-cream van in the air....

Three-and-a-half years later, in the dead of winter, the children are returned to their families...one by one.

All except for Ivy - the granddaughter of Homicide Detective Kate Wakeland. The other four children say Ivy is dead.

Speculation grows that the mysterious abductor is enacting a cruel revenge plot due to a murderer that Kate put in jail years before.

Kate isn't sure what to believe. But one thing is certain - she's about to begin the battle of her life. When the children were first stolen, she was prevented from investigating the case.

But now, Kate will be relentless in uncovering the identity of the abductor and discovering what happened to Ivy.

4.6 out of 5 stars
4.6 out of 5
5,143 global ratings
How are ratings calculated?
To calculate the overall star rating and percentage breakdown by star, we don’t use a simple average. Instead, our system considers things like how recent a review is and if the reviewer bought the item on Amazon. It also analyses reviews to verify trustworthiness.

Chrys_Evans
5.0 out of 5 stars Wow
Reviewed in Australia on 16 January 2021
Verified Purchase
This is the first book I’ve ever read of Anni Taylor and I have to say wow I was on the edge of my seat the entire book. It was gripping. Gut wrenching. Real and raw. The characters all had depth. It honestly could have been a true crime book and I would have believed it. It was law and order svu/ Olivia benson type fierceness and i can’t wait for book two!
Read more
One person found this helpful
Helpful
Report abuse

Susan S
5.0 out of 5 stars A wonderful read!
Reviewed in Australia on 30 December 2020
Verified Purchase
I rarely read psychological thrillers, but I took a chance on this one as it is set in the Blue Mountains, where I live. I’’m so glad I did! This story is well-crafted and the descriptions of the locales are spot on. The story has many twists and turns and kept me reading to the exclusion of all else. Cannot recommend this book highly enough. Well done, Anni Taylor. Can’t wait to read the next book in this series.
Read more
Helpful
Report abuse

Andrea
5.0 out of 5 stars keeps you guessing
Reviewed in Australia on 27 December 2021
Verified Purchase
And it’s nice to read an Australian police mystery for a change. Anni weaves a complex tale from multiple pov to create a riveting tale of kidnap and heartache.
Read more
Helpful
Report abuse

Lynette
5.0 out of 5 stars Highly recommend.
Reviewed in Australia on 2 October 2020
Verified Purchase
It's nice to get into a long, meaty, mystery Thriller! Some long novels can be frustrating in their detail but there was so much tension and emotion in the story, it held me spellbound to the satisfying conclusion with many twists and OMG moments.
Read more
Helpful
Report abuse

Levi's gran
5.0 out of 5 stars Thrilling crimes Tory
Reviewed in Australia on 5 June 2021
Verified Purchase
I absolutely was captivated by all the characters, their strengths and weaknesses. The story was well written with a lot of 'un-put-downable' chapters. Read it in a couple of days/nights, some nights unable to go to bed because the story was too exciting and wouldn't be able to sleep until I knew the answer to the problem.
Read more
Helpful
Report abuse

Tara Lee
4.0 out of 5 stars Great start to a new series.
Reviewed in Australia on 17 November 2020
Verified Purchase
The interesting blurb of this book really caught my attention, and the book did not disappoint. The story kept my interest the whole way through, and kept me guessing til the end.
I am now off to start reading book 2 in the series.
Read more
Helpful
Report abuse

Julie
4.0 out of 5 stars Great read
Reviewed in Australia on 11 November 2021
Verified Purchase
Thoroughly enjoyed this book. It hooked me early and surprised me a lot. I enjoyed the characters and their traits. Lots of twists.
Read more
Helpful
Report abuse

Jeldmer
5.0 out of 5 stars This book is full of suspense.
Reviewed in Australia on 18 October 2020
Verified Purchase
One child was not returned when the other four who had been abducted were set free. Why not? How were they taken in the first place? How did the parents cope. A great story.
Read more
Helpful
Report abuse
See all reviews

Hilary D
5.0 out of 5 stars Great read
Reviewed in the United Kingdom on 29 February 2020
Verified Purchase
First book I have read from this author, I wasn't sure what to expect was surprised it exceeded my expectations. Great story, I'm not giving a review outlining the story as I think it would give too much away, this book i thoroughly enjoyed and would say to anyone who likes a great story with plenty of twists and turns and an unexpected end then this is for you.
Read more
11 people found this helpful
Report abuse

Lynda Kelly
4.0 out of 5 stars Some Niggles Let Her Down Again
Reviewed in the United Kingdom on 15 December 2020
Verified Purchase
My third book by this author and the third I've given 4*. Every time there are niggling mistakes that take away the coveted full house for me and again with this one. Such a pity. She's got better with her misplacement of apostrophes but the missing words or additional words that aren't needed let this one down instead, annoyingly, along with some missed off or needlessly added speechmarks. Kate was in the shower too often as well !!
I was taken right into the story at one point when Kate revisited the scene of the children's abduction as the icecream van passed my house at the same time I was reading it, which was spooky !! Something else I found strange was the mention of a mirror being found in a shed.....there seemed no reason for it at all !!
I made a note 31% in at a passage I was totally confused at and then at 68% realised that this paragraph belonged in the latter part of the book, so that was somebody's MASSIVE oversight !!
I've not heard of a smartacre and Google was no help so I think she maybe means smartarse here, she wrong lung full and not lungful and I found the word compositor an odd one to use where she did but possibly it has a differing meaning in Australia. At one point half of six screens featured drawings, supposedly by 4 children......and my maths isn't THAT bad so that was annoyingly wrong as well. I'd no idea that parts of Australia ever had snow, either. I was touched by the author's dedication at the end regarding the horrific fires there in 2019-2020, cos' they pretty much got overlooked when the pox struck, which is bloody sad. I really like the black 'n' white cover on my Kindle version as well.
The story itself took a bit of a peculiar turn around 76% in, which I noted but I stuck with it. A couple of times I was decidedly sniffy and there were some amusing little comments I highlighted, too. There's no bad language, if that sort of thing offends anybody. I'll definitely be reading book 2 to see where we go. It was nice to have an older lady detective feature for a change, too, who isn't permanently pissed !!
Read more
3 people found this helpful
Report abuse

theresa
5.0 out of 5 stars Excellent
Reviewed in the United Kingdom on 28 February 2020
Verified Purchase
This is the 2nd book I have read by Anni Taylor in a week.
The end of this book had all the hairs on my my body raised.
(I won’t spoil it).
My only complaint is that my housework isn’t getting done :)
Read more
10 people found this helpful
Report abuse

Paula MacG.
5.0 out of 5 stars Another brilliant story from Anni Taylor
Reviewed in the United Kingdom on 23 January 2020
Verified Purchase
I bought this book as soon as it was released, I did not bother reading the 'blurb'. I knew I would enjoy anything written by this very talented author - I was not disappointed!

One of the things we do when read fiction is to try to guess what happens next, who did it and why. We love to speculate on the plot, and quite often we guess correctly.

Not with Anni Taylor - her stories are very well written and they certainly keep you guessing. Anni has a brilliant imagination, her stories are always refreshingly different from the average tale.

I am looking forward to the next one in the series - well done Anni, keep up the good work!
Read more
6 people found this helpful
Report abuse

Miss K L Zivarts
4.0 out of 5 stars An addictive read from the start
Reviewed in the United Kingdom on 13 January 2021
Verified Purchase
Wowee what a brilliant read. I have read thousands of books in my life and this is probably one of the ones i have found the hardest to put down, every time i was about to have a break there was another twist to keep me reading.
I absolutely loved this book, i really felt for the main character Kate and found her very likeable.
The twists kept coming throughout the book, some of which i did manage to guess (but i've had years of book reading to work out suspects) but a couple of raised eyebrows shocks.
I won't spoil anything but the identity of the kidnappers did pleasantly surprise me, i had suspected someone else completely so i was happy with that, however the reason given for why the children were kidnapped was a bit of a letdown i think. It didn't really make much sense to me and didn't leave me gobsmacked and i don't think enough of an explanation was really given. This doesn't ruin the story for me though because the rest of it was brilliant, i have purchased the next book already!
Read more
2 people found this helpful
Report abuse
See all reviews