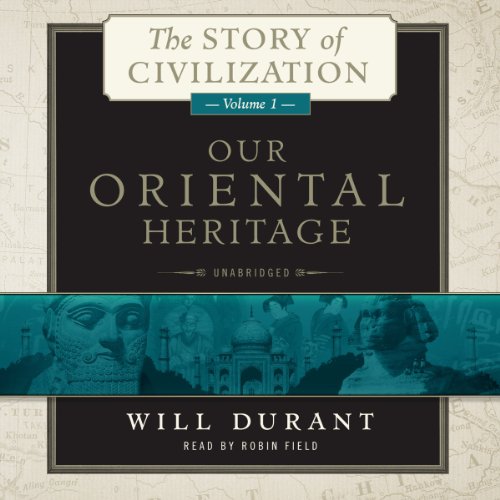 Our Oriental Heritage: The Story of Civilization, Volume 1

Will Durant (Author), Robin Field (Narrator), Blackstone Audio, Inc. (Publisher) & 0 more
4.6 out of 5 stars 187 ratings
See all formats and editions
Sorry, there was a problem loading this page. Try again.

The first volume of Will Durant's Pulitzer Prize-winning series, Our Oriental Heritage: The Story of Civilization, Volume I chronicles the early history of Egypt, the Middle East, and Asia. In this masterful work, readers will encounter:

Read more
©2013 Will Durant (P)2013 Blackstone Audio, Inc.
Previous page
Next page
Learn more about membership
By completing your purchase, you agree to Audible’s Conditions Of Use and Privacy Notice.
Sold and delivered by Audible, an Amazon company

4.6 out of 5 stars
4.6 out of 5
187 global ratings
How are ratings calculated?
To calculate the overall star rating and percentage breakdown by star, we don’t use a simple average. Instead, our system considers things like how recent a review is and if the reviewer bought the item on Amazon. It also analyses reviews to verify trustworthiness.

Nathalie Fremaux B
5.0 out of 5 stars One of the best historian
Reviewed in the United Kingdom on 3 August 2021
Verified Purchase
Great approach of history from a very cultivated author. His collection should be available in any college and university.
Excellent book.
Read more
Report abuse

Ragdoll Radio
5.0 out of 5 stars Masterful overview.
Reviewed in the United Kingdom on 30 November 2015
Verified Purchase
Great history book by a great historian - for serious students of history. Not for those who watch the History Channel version of the past. This one's for the grown ups. Durant always writes history with a rare wit, insight and charm. Great understanding of human nature.
Read more
Report abuse

Kindle Customer
5.0 out of 5 stars Brilliant.
Reviewed in the United Kingdom on 28 April 2019
Verified Purchase
Yes much is outdated. But much of it is relevant. The insightful views of events by Mr Durant make it an enjoyable and informative read.
Read more
One person found this helpful
Report abuse