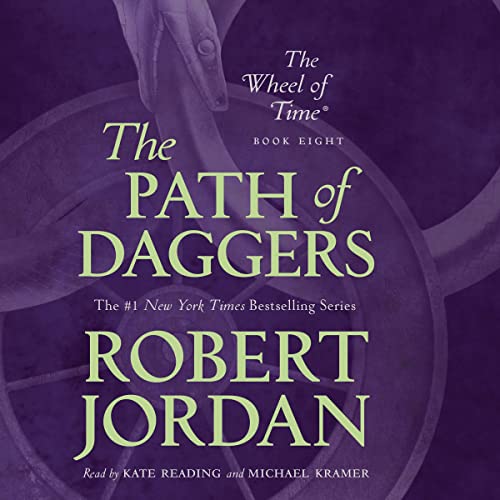 Path of Daggers: Book Eight of The Wheel of Time

The Wheel of Time is now an original series on Prime Video, starring Rosamund Pike as Moiraine!

Since its debut in 1990, The Wheel of Time by Robert Jordan has captivated millions of readers around the globe with its scope, originality, and compelling characters.

The Wheel of Time turns and Ages come and go, leaving memories that become legend. Legend fades to myth, and even myth is long forgotten when the Age that gave it birth returns again. In the Third Age, an Age of Prophecy, the World and Time themselves hang in the balance. What was, what will be, and what is, may yet fall under the Shadow.

The seals of Shayol Ghul are weak now, and the Dark One reaches out. The Shadow is rising to cover humankind.

In Tar Valon, Min sees portents of hideous doom. Will the White Tower itself be broken?

In Cantorin, among the Sea Folk, High Lady Suroth plans the return of the Seanchan armies to the mainland.

In the Stone of Tear, the Lord Dragon considers his next move. It will be something no one expects, not the Black Ajah, not Tairen nobles, not Aes Sedai, not Egwene or Elayne or Nynaeve.

Against the Shadow rising stands the Dragon Reborn...

The Wheel of Time

#5 The Fires of Heaven

#7 A Crown of Swords

#8 The Path of Daggers

By Robert Jordan and Brandon Sanderson

By Robert Jordan and Teresa Patterson

The World of Robert Jordan's The Wheel of Time

The Wheel of Time Companion

By Robert Jordan and Amy Romanczuk

Patterns of the Wheel: Coloring Art Based on Robert Jordan's The Wheel of Time

Read more
©1998 The Bandersnatch Group, Inc. (P)2008 Macmillan Audio
Previous page
Next page
Learn more about membership
By completing your purchase, you agree to Audible’s Conditions Of Use and Privacy Notice.
Sold and delivered by Audible, an Amazon company

4.5 out of 5 stars
4.5 out of 5
5,567 global ratings
How are ratings calculated?
To calculate the overall star rating and percentage breakdown by star, we don’t use a simple average. Instead, our system considers things like how recent a review is and if the reviewer bought the item on Amazon. It also analyses reviews to verify trustworthiness.

Jennifer Berry
4.0 out of 5 stars Gripping
Reviewed in Australia on 13 February 2020
Verified Purchase
I have loved every one in this series. Although the one draw back I notice with this and the previous book is it is taking much longer for the plot to progress and he is describing down to the nth degree.
However he does write interesting descriptions so it can be forgiven.
Even now I am wondering what happens in the next book and how various threads of the plot will go.
Amazingly written, though it seems Mr Jordan thinks women scheme and plot from sun up to sundown.
Read more
Helpful
Report abuse

Owen Negus
4.0 out of 5 stars the path of baggers continue to develop Jordan tale
Reviewed in Australia on 22 February 2022
Verified Purchase
The wheel of time continues to turn slowly, the fate of Mat remains unknown and Rand makes no further progress. The story gains more twist and you don't know who the main characters can trust. Looking forward for this twisted tale to slowly unravel in the books to come.
Read more
Helpful
Report abuse

Tim Bodley
3.0 out of 5 stars The weakest of an epic series.
Reviewed in Australia on 8 February 2017
Verified Purchase
Compared to the first 7 books, this one seemed rushed to me. Rands' character seems to abruptly shift towards the darker aspect covered on the later books.
Read more
One person found this helpful
Helpful
Report abuse

PT007
5.0 out of 5 stars Imaginative, unpredictable and amazing read
Reviewed in the United Kingdom on 27 February 2020
Verified Purchase
This series of books is the best I have read. Each book I have found hard to put down, this one has been no different.

I love the way the characters develop and the detail around each individual group. So many smaller stories in one.

I am binge reading this series, I think I would have found it quite difficult waiting for the next one to be published. I love fantasy and these books will appeal to any teens and adults that like a good fantasy read. I imagine I will have a cup of tea and download the next one.
Read more
One person found this helpful
Report abuse

JRC Salter
2.0 out of 5 stars Get on with it!
Reviewed in the United Kingdom on 26 November 2012
Verified Purchase
So we have now come to a point in the Wheel of Time series where there are so many characters, so many plot lines, so many things going on that Jordan feels he has to spend literally half the book reintroducing us to everything. Aside from using the Bowl of the winds (finally!) at the beginning, nothing happens for the first half. Rand himself doesn't appear until around 48% of the way through. Then we actually get a large scale battle and it's quite good, but can't match the excitement of Dumai's Well's.

Basically, the whole book is a mess. Like the last couple, there is no clear direction, but unlike any of the others, this feels like it's missing a few pages. We seem to completely skip Rand's first encounter with the Seanchan and move on to the next. We get virtually no insight into how Rand feels about being an actual king which I would have thought would be a major thing considering how Jordan tells us every tiny thing happening inside the characters' heads. Some of the plot is told retrospectively in the thoughts of characters which is a HUGE authorial mistake and goes against the general rule of 'show, don't tell'.

Having said this, however, the good bits are good. Egwene begins to assert her authority over the Hall, Perrin and Faile begin to get along better, Rand uses Callandor for the first time since Shadow Rising, to remarkable and devastating effect. But most of these things could easily have been used in either the Crown of Swords or Winter's Heart. The only reason I can think of for this book to exist would be just to have the cliff hangers and open endings Path of Daggers has. Even though they are good hooks to get you to buy the next book, doesn't mean an entire book should be written as an excuse to write them; the endings would be difficult to fit into Crown of Swords, but would work as a beginning to Winter's Heart. Rand defeating Sammael and becoming King of Illian in Crown of Swords feels like a natural ending, but Jordan could have easily have Rand go against the Seanchan in that book. The two-battle ending worked in Fires of Heaven and could do so here as well. The usage of the Bowl of the Winds could have worked in Crown of Swords too. The rest of Path of Daggers could have acted as the beginning to Winter's Heart.

So, all in all, this, along with Crossroads of Twilight, is one of two books I've read that doesn't need to exist at all. Read only as a means to progress the story and speed read most of it to get it done faster.
Read more
8 people found this helpful
Report abuse

Graham
2.0 out of 5 stars Felt like filler
Reviewed in the United Kingdom on 1 April 2022
Verified Purchase
There’s a lot of build up in this and people moving about but mostly it feels like the wheels were kept spinning for things to happen later. This could have been a far shorter book.
Read more
One person found this helpful
Report abuse

RL
4.0 out of 5 stars Another great book in the series
Reviewed in the United Kingdom on 15 January 2020
Verified Purchase
Some decent progression of the plot in this one, and in the last 10 chapters it really picks up the pace and gets very intriguing. Shorter than the previous couple of entries, it's a nice read for around 2 weeks. The main downside is at times way too lengthy descriptions of every person and location in each chapter, it doesn't necessarily drag but there are certain parts that just don't seem necessary to set the scene.
Read more
Report abuse

Ocean lily
1.0 out of 5 stars MISSING PAGES!!!!! DO NOT PURCHASE!!!!
Reviewed in the United Kingdom on 31 May 2021
Verified Purchase
This edition has 20 missing pages in the beginning of the book and I didn't realise until after the return window closed.

Probably an error in the print run. Can't even tell you which edition is it as the copyright page is amongst the pages missing.
Read more
One person found this helpful
Report abuse
See all reviews