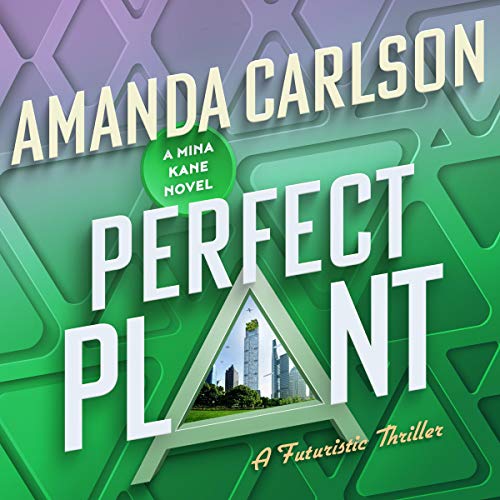 Mina Kane’s next undercover op is of the green thumb variety. Tasked to break into a penthouse at the tip-top of a megascraper and air-meld incriminating data on a hydro-shipping mogul, Mina must first pose as an apt gardener who knows a thing or two about roses. The only problem is the rookie’s along for the ride, and he’s a pro at making everything more difficult than it has to be.

Infiltrating the inner sanctum proves to be time-consuming, and agent Adam has a chance to shine, but that’s not all Mina’s in for. Her baby brother is in some trouble, and Vincent Kramer, the colonel-in-arms of the French Protectorate, is missing. An encrypted locator shows up at Mina’s door, but her childhood-pal-turned-international-heartthrob is still nowhere to be found.

This op is one solar flare away from being the biggest, deadliest one yet.

Switch between reading the Kindle book & listening to the Audible narration with Whispersync for Voice.
Get the Audible audiobook for the reduced price of $3.49 after you buy the Kindle book.
Learn more about membership
By completing your purchase, you agree to Audible’s Conditions Of Use and Privacy Notice.
Sold and delivered by Audible, an Amazon company
Share

Toots Sullivan
TOP 500 REVIEWER
5.0 out of 5 stars REALLY GOOD
Reviewed in Australia on 1 December 2021
Verified Purchase
I loved the lightheartedness and subtle humour that was sprinkled throughout this often tense very fast paced thriller set in the future. It was so interesting. I finished it with a smile on my face.
Read more
Helpful
Report abuse
See all reviews

catlady66
5.0 out of 5 stars Great series
Reviewed in the United Kingdom on 2 August 2021
Verified Purchase
Loved it just gets better every book love it and its good to see what it was like before all the destruction happens from the Holly danger books which are just as great can't wait to see what else is in store for mina and her Co workers defo check out this series if want a great book to read won't be disappointed on to the next book for me
Read more
Report abuse

S. Lacey
5.0 out of 5 stars Brilliant!!!!
Reviewed in the United Kingdom on 15 December 2020
Verified Purchase
I really enjoyed this book! The plot was amazing, it was fast-paced & action packed! I can't wait to start the third book!
Read more
Report abuse

.
4.0 out of 5 stars A good thriller
Reviewed in the United Kingdom on 6 January 2022
Verified Purchase
Her attempt to make it sound futuristic may be reasonable but it grates so much it spoils the enjoyment of the story.
Read more
Report abuse

sharronmainor
5.0 out of 5 stars An excellent book!
Reviewed in the United States on 15 December 2021
Verified Purchase
I enjoyed this book very much. The plot kept me engaged throughout. I only put it down for necessary times and headed straight back into the story as soon as possible. I am not very tech savy but, was able to follow the action and slang easily. I highly recommend this author and look forward to reading more from this writer.
Read more
One person found this helpful
Report abuse

Molly, RN
5.0 out of 5 stars Love this series!
Reviewed in the United States on 18 January 2021
Verified Purchase
I have nearly everything Amanda Carlson writes on my shelves. I really like her voice. This series is great!
Read more
3 people found this helpful
Report abuse
See all reviews
Back to top
Get to Know Us
Make Money with Us
Let Us Help You
And don't forget:
© 1996-2022, Amazon.com, Inc. or its affiliates