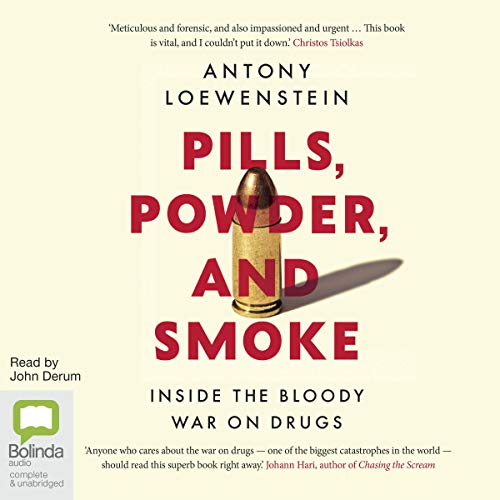 Pills, Powder, and Smoke: Inside the Bloody War on Drugs

Like the never-ending war on terror, the drugs war is a multi-billion-dollar industry that won’t go down without a fight. Pills, Powder, and Smoke explains why.

The war on drugs has been official American policy since the 1970s, with the UK, Europe, and much of the world following suit. It is at best a failed policy, according to best-selling author Antony Loewenstein. Its direct results have included mass incarceration in the US, extreme violence in different parts of the world, the backing of dictatorships, and surging drug addiction globally. And now the Trump administration is unleashing diplomatic and military forces against any softening of the conflict.

Pills, Powder, and Smoke investigates the individuals, officials, activists, victims, DEA agents and traffickers caught up in this deadly war. Travelling through the UK, the US, Australia, Honduras, the Philippines and Guinea-Bissau, Loewenstein uncovers the secrets of the drug war, why it's so hard to end and who is really profiting from it.

In reporting on the front lines across the globe - from the killing fields of Central America to major cocaine transit routes in West Africa - Loewenstein reveals how the war on drugs has become the most deadly war in modern times. Designed and inspired by Washington, its agenda has nothing to do with ending drug use or addiction but is all about controlling markets, territories and people. Instead, Loewenstein argues, the legalisation and regulation of all drugs would be a much more realistic and humane approach. The evidence presented in this book will persuade many listeners that he's right.

Switch between reading the Kindle book & listening to the Audible narration with Whispersync for Voice.
Get the Audible audiobook for the reduced price of $5.49 after you buy the Kindle book.
Final days - Don't miss out!
Learn more about membership
By completing your purchase, you agree to Audible’s Conditions Of Use and Privacy Notice.
Sold and delivered by Audible, an Amazon company

4.3 out of 5 stars
4.3 out of 5
21 global ratings
How are ratings calculated?
To calculate the overall star rating and percentage breakdown by star, we don’t use a simple average. Instead, our system considers things like how recent a review is and if the reviewer bought the item on Amazon. It also analyses reviews to verify trustworthiness.

Tomred1111
2.0 out of 5 stars Disappointing
Reviewed in Australia on 7 January 2020
A very disappointing experience. The premise and structure of the book sounded quite interesting but I gave up after a 2 1/2 chapters. The writing is pleasant enough (hence 2 stars) but it meanders all over the place. It completely lacks structure and is chock-full of conjecture, very short on facts and completely opinionated despite repeated claims of journalistic neutrality. Did not buy through Amazon unfortunately so wasted an extra $8.
Read more
Helpful
Report abuse
See all reviews

Tobias D L Muse
5.0 out of 5 stars Important read in to the war on drugs.
Reviewed in the United States on 26 April 2020
Verified Purchase
Brilliant account of the war on drugs and all it's achieved and failed to achieve. Highly recommended.
Read more
2 people found this helpful
Report abuse

alan amsterdam
5.0 out of 5 stars Great perspective on the war on drugs which is really a war on people
Reviewed in the United States on 12 November 2019
Verified Purchase
Fascinating book about the failed war on drugs.
Read more
One person found this helpful
Report abuse
See all reviews