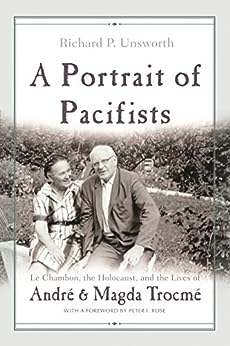 A Portrait of Pacifists: Le Chambon, the Holocaust, and the Lives of André and Magda Trocmé (Religion, Theology and the Holocaust) Kindle Edition

by Richard P. Unsworth (Author) Format: Kindle Edition
See all formats and editions
Sorry, there was a problem loading this page. Try again.

This biography tells the story of André and Magda Trocmé, two individuals who made nonviolence a way of life. During World War II, the southern French town of Le Chambon-sur-Lignon and its surrounding villages became a center where Jews and others in flight from Nazi roundups could be hidden or led abroad, and where children with parents in concentration camps could be nurtured and educated. The Trocmés’ courage during World War II has been well documented in books and film, yet the full arc of their lives—the impulse that led them to devote themselves to nonviolence and their extensive work in the decades following the war—has never been compiled into a full-length biography.

Based on the Trocmés’ unpublished memoirs, interviews, and the author’s research, the book details the couple’s role in the history of pacifism before, during, and after the war. Unsworth traces their mission of building peace by nonviolence throughout Europe to Morocco, Algeria, Japan, Vietnam, and the United States. Analyzing the political and religious complexities of the pacifist movement, the author underscores the Trocmés’ deeply personal commitment. Regardless of which nation was condoning violence, shaping international relations, or pressing for peace, and regardless of whose theology dominated the pulpits, both André and Magda remained driven by conscience to make nonviolence the hallmark of their life’s work.

A compelling and engaging narrative that tasks any reader to think about the role and reality of violence within their world. More to the point, it tasks anyone interested in nonviolence to think about the Christian call to become peacemakers in the world as an uncompromising demand. --Peder Jothen, St. Olaf College, Peace and Justice Studies Journal --This text refers to the hardcover edition.

Richard P. Unsworth is a senior fellow at the Kahn Liberal Arts Institute at Smith College. He has taught religion at Smith College and Dartmouth College, and served as headmaster and president of Northfield Mount Hermon School. His years of involvement with the Collège Cévenol in France led to a friendship with André and Magda Trocmé. --This text refers to the hardcover edition.

4.8 out of 5 stars
4.8 out of 5
8 global ratings
How are ratings calculated?
To calculate the overall star rating and percentage breakdown by star, we don’t use a simple average. Instead, our system considers things like how recent a review is and if the reviewer bought the item on Amazon. It also analyses reviews to verify trustworthiness.

Gregory A. Johnson
5.0 out of 5 stars How would you fight the Nazis?
Reviewed in the United Kingdom on 5 March 2015
Verified Purchase
Well-written and fascinating look at two people changing their world. This book presents a perspective on the world that is almost entirely ignored nowadays, a perspective that might yet save us all. This is also a great adventure yarn: standing up to the Nazis armed with nothing but truth!
Read more
Report abuse

rosine tenenbaum
5.0 out of 5 stars A page turner of a biography
Reviewed in the United States on 8 August 2012
Verified Purchase
A remarkable biography: a vivid portrait of France social landscape between the two World Wars and after. The repercussion of the social and political conflicts of the past century are presented through the life of a Pacifist Protestant Pastor and his wife who managed to save countless of Jewish children with the help of his congregation and a whole network of Resistents in spite of the Gestapo and the collaborator Vichy government. Under his leadership it was an entire region that got involved in this rescue mission. After the war Pasteur Trocme and his wife Magda were tirelessly active in Reconciliation and Peace organizations. The agile blend of well chosen anecdotes with sharp and subtle analysis of the circumstances and causes of the choice of these remarkable people whose names are inscribed in the Yad Vashem Memorial in Jerusalem make this book instructive and inspiring.
Read more
7 people found this helpful
Report abuse

Peter Grose
5.0 out of 5 stars At last, a balanced story
Reviewed in the United States on 13 June 2012
Verified Purchase
The story of the Huguenot pastor André Trocmé, his wife Magda, and the rescue of Jews in a cluster of 12 villages on the Plateau-Vivarais Lignon in the Haute-Loire department of France during World War 2, has been told before, most notably in Pierre Sauvage's award winning documentary Weapons Of The Spirit, and in Philip Hallie's 1979 book Lest Innocent Blood Be Shed. It has never been told in as balanced a way as in this new biography by Richard Unsworth.

Andre Trocme was that rarest of all human beings, an intellectual with a strong practical streak. He wasn't one simply to ask: "What do we all think?" He would quickly move on to "What are we going to do?" He preached pacifism in France when it was illegal to do so. From 1942 to 1944 he was the leading figure in a program to conceal Jews from the Vichy authorities and later the German occupiers. At the time this was not only illegal but invited arrest, deportation and death. He was brave, wilful, impulsive, charismatic and self-assured. However without his wife Magda, the ever practical networker, sceptic, organizer and manager, his high ideals might never have been so effectively realized.

The importance of this book is that it places the Trocmes accurately in context. Previous authors have tended to portray the Trocmes as the sole force for good on the Plateau. But Le Chambon-sur-Lignon, where Trocme was pastor, was but one of 12 villages involved in the rescue, and Andre Trocme was but one of at least a dozen clergymen, mostly Protestant but including some Catholics, who organized the shelter of Jews. He was indisputably the most important figure, but he did not act alone. The heroes and heroines surely included the extraordinary people of the Plateau, who risked everything by offering their spare rooms and barns for the rescue project. They asked for no reward beyond the knowledge that they had made the morally correct decision. Andre Trocme led by providing inspiration: literally thousands of ordinary people joined him in taking the ultimate risk. It is to Richard Unsworth's great credit that he gets all this right: Andre and Magda Trocme are well served by this book, but so are the people of the Plateau.

A fine book. Read it.

Marilyn
5.0 out of 5 stars Loved this book.
Reviewed in the United States on 6 August 2013
Verified Purchase
A remarkable study on courage and faith. What these ordinary French farmers did was amazing. An excellent study in faith and living one's faith.
Read more
One person found this helpful
Report abuse
See all reviews
Report an issue
Does this item contain inappropriate content?
Report
Do you believe that this item violates a copyright?
Report
Does this item contain quality or formatting issues?
Report