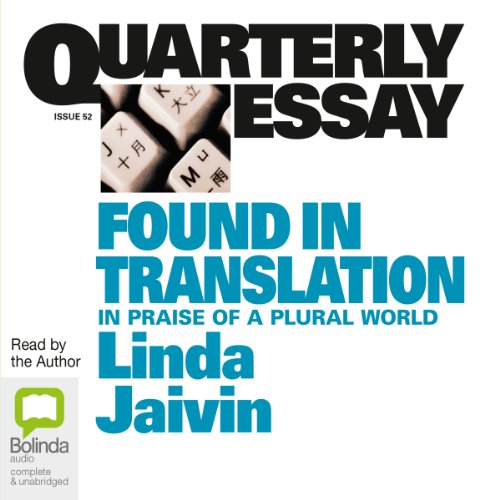 Quarterly Essay 52: Found in Translation: In Praise of a Plural World

Whether we’re aware of it or not, we spend much of our time in this globalised world in the act of translation. Language is a big part of it, of course, as anyone who has fumbled with a phrasebook in a foreign country will know, but behind language is something far more challenging to translate: culture. As a traveller, a mistranslation might land you a bowl of who-knows-what when you think you asked for noodles, and mistranslations in international politics can be a few steps from serious trouble.

But translation is also a way of entering new and exciting worlds, and forging links that never before existed.

Linda Jaivin has been translating from Chinese for more than thirty years. While her specialty is subtitles, she has also translated song lyrics, poetry and fiction, and interpreted for ABC film crews, Chinese artists and even the English singer Billy Bragg as he gave his take on socialism to some Beijing rockers.

In Found in Translation, she reveals the work of the translator and considers whether different worldviews can be bridged. She pays special attention to China and the English-speaking West, Australia in particular, but also discusses French, Japanese and even the odd phrase of Maori. This is a free-ranging essay, personal and informed, about translation in its narrowest and broadest senses, and the prism - occasionally prison - of culture.
Read more
©2013 Linda Jaivin. (P)2013 Bolinda Publishing Pty Ltd
Previous page
Next page
Final days - Don't miss out!
Learn more about membership
By completing your purchase, you agree to Audible’s Conditions Of Use and Privacy Notice.
Sold and delivered by Audible, an Amazon company

P Rolley
5.0 out of 5 stars Great
Reviewed in the United States on 13 July 2014
Verified Purchase
Great article really worth reading if any interest in cultures/meanings/language and role in globalised world.
Read more
Report abuse
See all reviews