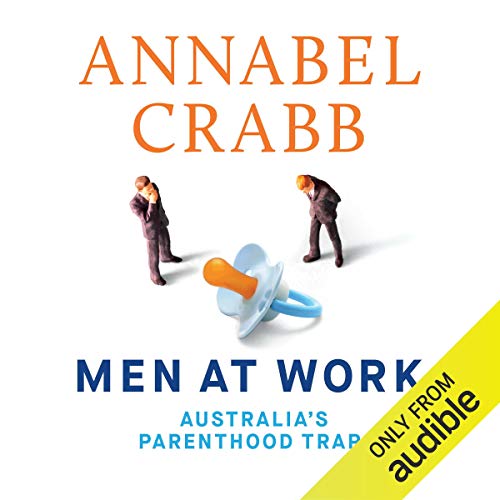 Annabel Crabb (Author, Narrator), Audible Studios (Publisher)
4.9 out of 5 stars 16 ratings
See all formats and editions
Sorry, there was a problem loading this page. Try again.

When New Zealand’s prime minister, Jacinda Ardern, announced her pregnancy, the headlines raced around the world. But when Scott Morrison and Josh Frydenberg became the first prime minister and treasurer duo since the 1970s to take on the roles while bringing up young children, this detail passed largely without notice. Why do we still accept that fathers will be absent? Why do so few men take parental leave in this country? Why is flexible and part-time work still largely a female preserve?

In the past half-century, women have revolutionised the way they work and live. But men’s lives have changed remarkably little. Why? Is it because men don’t want to change? Or is it because, every day in various ways, they are told they shouldn’t?

In Men at Work, Annabel Crabb deploys political observation, workplace research and her characteristic humour and intelligence to argue that gender equity cannot be achieved until men are as free to leave the workplace (when their lives demand it) as women are to enter it.

'Women’s surge into the workplace has been profound over the last century. But it hasn’t been matched by movement in the other direction: while the entrances have been opened to women, the exits are still significantly blocked to men. And if women have benefited from the sentiment that ‘girls can do anything’, then don’t we similarly owe it to the fathers, mothers and children of the future to ensure that ‘boys can do anything’ means everything from home to work?'

Updated in 2020 with a new afterword, which explores what have we learned from the parental experiment of the COVID-19 lockdowns.

Read more
©2019, 2020 Annabel Crabb (P)2019 Audible Australia Pty Ltd.
Previous page
Next page
Learn more about membership
By completing your purchase, you agree to Audible’s Conditions Of Use and Privacy Notice.
Sold and delivered by Audible, an Amazon company

4.9 out of 5 stars
4.9 out of 5
16 global ratings
How are ratings calculated?
To calculate the overall star rating and percentage breakdown by star, we don’t use a simple average. Instead, our system considers things like how recent a review is and if the reviewer bought the item on Amazon. It also analyses reviews to verify trustworthiness.

Susan Roberts
5.0 out of 5 stars Ground breaking research.
Reviewed in Australia on 21 September 2019
Verified Purchase
I loved this essay and now want to read Annabel Crabb's "The Wife Drought". She has done a great job in analysing one of the last bastions of discrimination between men and women. Who would have thought that men are the ones discriminated against when it comes to family leave? We're getting there slowly but surely.
Read more
Helpful
Report abuse

Charisse
5.0 out of 5 stars Changing my perspective on the challenges men may face who want to access parental leave.
Reviewed in Australia on 6 October 2019
Verified Purchase
Very informative & changed my perspective. I have empathy for new Fathers who would like the opportunity to share the parenting experience but are faced with unhelpful comment and peer pressure to be the atypical breadwinner.
Read more
Helpful
Report abuse

Kat
5.0 out of 5 stars #nailedit
Reviewed in Australia on 27 October 2019
Verified Purchase
Annabel Crabb gets it. A thought-provoking work and a necessary conversation about work in our modern-day society.
Read more
Helpful
Report abuse

Elizabeth A Moore
5.0 out of 5 stars Highly entertaining and though provoking
Reviewed in Australia on 5 October 2019
Verified Purchase
Great build on the Wife Drought and loved the provocation that we need to look at how we discriminate against men in order to solve the women in senior positions issue. Loved it! Thank you Annabel
Read more
Helpful
Report abuse

Monica Forlano
5.0 out of 5 stars Annabel tells it how it is
Reviewed in Australia on 29 September 2019
Verified Purchase
Very interesting information delivered in a conversational manner
Read more
Helpful
Report abuse

TardisAngel
4.0 out of 5 stars A fascinating read that poses more questions than offers solutions
Reviewed in Australia on 24 February 2021
This book was loaned to me by my mother-in-law who is a big Annabel Crabb fan and while this isn't what I usually read I did find it a captivating account of parental leave in the Western world and what perhaps could be done to improve it - here in Australia particularly. It was an easy read and I would definitely recommend it to anyone interested in the topics presented ... just keep in mind that while Annabel discusses a range of issues, there aren't too many solutions offered to the problems/questions posed.
Read more
One person found this helpful
Helpful
Report abuse
See all reviews