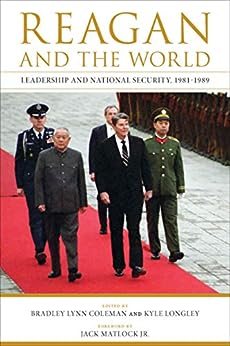 Reagan and the World: Leadership and National Security, 1981--1989 (Studies in Conflict, Diplomacy, and Peace) Kindle Edition

Essays on a presidency during a pivotal period in international affairs, informed by newly declassified documents.

Throughout his presidency, Ronald Reagan sought “peace through strength” during an era of historic change. In the decades since, pundits and scholars have argued over the president’s legacy: Some consider Reagan a charismatic and consummate leader who renewed American strength and defeated communism; to others he was an ambitious and dangerous warmonger whose presidency was plagued with mismanagement, misconduct, and foreign policy failures. The recent declassification of Reagan administration records and the availability of new Soviet documents has created an opportunity for more nuanced, complex, and compelling analyses of this pivotal period in international affairs.

In Reagan and the World, leading scholars and national security professionals offer fresh interpretations of the fortieth president's influence on American foreign policy. This collection addresses Reagan's management of the US national security establishment as well as the influence of Secretary of Defense Caspar Weinberger and others in the administration and Congress. The contributors present in-depth explorations of US-Soviet relations and American policy toward Asia, Latin America, Europe, and the Middle East. This balanced and sophisticated examination reveals the complexity of Reagan's foreign policy, clarifies the importance of other international actors of the period, and provides new perspectives on the final decade of the Cold War.

“Filled with lessons for current and future leaders . . . help[s] us understand how the past shapes the world today, including the intricate US relationship with Russia.” ―Admiral James G. Stavridis, U.S. Navy (ret.), former Supreme Allied Commander, NATO

"The short, clearly written individual essays make the book a valuable tool for introducing students to historical debates in the field." -- Journal of Military History

"This is a valuable collection that reflects the current state of Reagan scholarship. The book represents a wide examination of a key period in US foreign relations, and one that, as the foreword reminds us, holds lessons for national security students and professionals today, especially those concerned with negotiations with antagonistic states, nuclear policy, and relationships between allies." -- H-Diplo

" Reagan and the World is filled with lessons for current and future leaders. Its authors help us understand how the past shapes the world today, including the intricate US relationship with Russia." -- Admiral James G. Stavridis, U.S. Navy (ret.), former Supreme Allied Commander, NATO

"Coleman and Longley have assembled a terrific line-up of contributors, and both are accomplished scholars whose reputations and skills enhance this valuable contribution to understanding a contested presidency." -- Richard H. Immerman, author of Empire for Liberty: A History of American Imperialism from Benjamin Franklin to Paul Wolfowitz

--This text refers to an out of print or unavailable edition of this title.

Bradley Lynn Coleman is the director of the John A. Adams '71 Center for Military History & Strategic Analysis at the Virginia Military Institute. He is the author of Colombia and the United States: The Making of an Inter-American Alliance, 1939-1960.

Kyle Longley is the Snell Family Dean's Distinguished Professor in the School of Historical, Philosophical, and Religious Studies and the School of Politics and Global Studies at Arizona State University. He is the author of six books, including Deconstructing Reagan: Conservative Mythology and America's Fortieth President. --This text refers to an out of print or unavailable edition of this title.

4.0 out of 5 stars
4 out of 5
4 global ratings
How are ratings calculated?
To calculate the overall star rating and percentage breakdown by star, we don’t use a simple average. Instead, our system considers things like how recent a review is and if the reviewer bought the item on Amazon. It also analyses reviews to verify trustworthiness.

Pat Mayorga
5.0 out of 5 stars Easily 5 stars.
Reviewed in the United States on 20 January 2021
Verified Purchase
Well researched. Very insightful. Easy to read. Highly recommend it.
Read more
Report abuse
See all reviews
Report an issue
Does this item contain inappropriate content?
Report
Do you believe that this item violates a copyright?
Report
Does this item contain quality or formatting issues?
Report