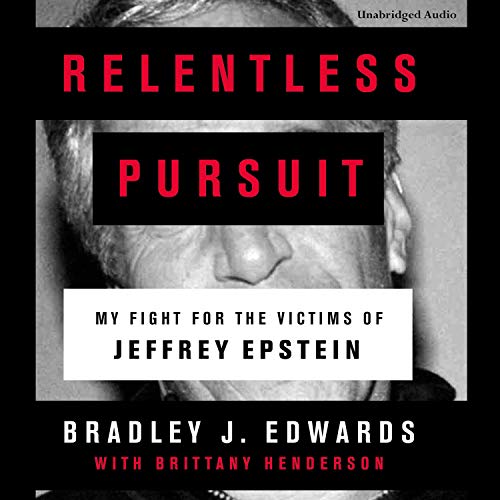 Relentless Pursuit: My Fight for the Victims of Jeffrey Epstein

This is the definitive story of the case against Jeffrey Epstein and the corrupt system that supported him, told in thrilling detail by the lawyer who has represented Epstein’s victims for more than a decade.

In June 2008, Florida-based victims’ rights attorney Bradley J. Edwards was 32 years old and had just started his own law firm when a young woman named Courtney Wild came to see him. She told a shocking story of having been sexually coerced at the age of 14 by a wealthy man in Palm Beach named Jeffrey Epstein. Edwards, who had never heard of Epstein, had no idea that this moment would change the course of his life. Over the next 10 years, Edwards devoted himself to bringing Epstein to justice and came close to losing everything in the process. Edwards tracked down and represented more than 20 of Epstein’s victims and shined a light on his network of contacts and friends, among them Donald Trump, Bill Clinton and Prince Andrew.

Edwards gives his riveting, blow-by-blow account of battling Epstein on behalf of his clients and provides stunning details never shared before. He explains how he followed Epstein’s criminal enterprise from Florida, to New York, to Europe, to a Caribbean island, and in the process, became the one person Epstein most feared could take him down. Epstein and his cadre of high-priced lawyers were able to manipulate the FBI and the Justice Department, but despite making threats and attempting schemes straight out of a spy movie, Epstein couldn’t stop Edwards, his small team of committed lawyers and most of all the victims, who were dead-set on seeing their abuser finally put behind bars.

This is the definitive account of the Epstein saga, personally told by the gutsy lawyer who took on one of the most brazen sexual criminals in the history of the US and exposed the corrupt system that let him get away with it for far too long.

Switch between reading the Kindle book & listening to the Audible narration with Whispersync for Voice.
Get the Audible audiobook for the reduced price of $11.49 after you buy the Kindle book.
Learn more about membership
By completing your purchase, you agree to Audible’s Conditions Of Use and Privacy Notice.
Sold and delivered by Audible, an Amazon company

4.6 out of 5 stars
4.6 out of 5
606 global ratings
How are ratings calculated?
To calculate the overall star rating and percentage breakdown by star, we don’t use a simple average. Instead, our system considers things like how recent a review is and if the reviewer bought the item on Amazon. It also analyses reviews to verify trustworthiness.

judith
5.0 out of 5 stars True insight
Reviewed in Australia on 12 August 2021
Verified Purchase
This remarkable book finally paints a much clearer picture of Jeffrey Epstein and his actions. Traveling with Brad and Epsteins survivors from the beginning of the police investigation and ending with Epstein s death, it is a story of courage and never giving up. I am so glad that the survivors had/have this amazing man in their corner!
Read more
Helpful
Report abuse

Pagan
5.0 out of 5 stars Sickening story of deparvity.
Reviewed in the United Kingdom on 6 August 2020
Verified Purchase
Totally riveted by this story and sickened at the same time. I feel for the young women involved who I am sure are upset at not getting their day in court. Epstein took the cowards way out (although as I write is open to debate). I certainly admire Bradley J. Edwards tenacity in seeing this through. Now waiting to see Ms Maxwell's testimony if in fact she survives long enough to give it, I see a plea bargain being negotiated. I would recommend this title.
Read more
7 people found this helpful
Report abuse

Father tyme
5.0 out of 5 stars An excellent and thought provoking book.
Reviewed in the United Kingdom on 28 July 2020
Verified Purchase
I can't say enough about how good this book is. It is well written and flows really well. The lawyer/author's ability to stay the course goes way above and beyond. The book is certainly informative and some of the details explained as to how Epstein avoided prosecution are breathtaking in their audacity, not to mention worrying as to how he seemingly effortlessly manipulated both people and processes.
Read more
7 people found this helpful
Report abuse

Hugo Vickers
5.0 out of 5 stars Gripping book
Reviewed in the United Kingdom on 12 July 2020
Verified Purchase
This is a compelling book, totally fascinating and I have not been so gripped by a book since James Fox - White Mischief - in about 1982. Amongst other things it is an extraordinary psychological portrait of a sociopath. Hugh Laurie (The Night Manager) should play him if they turn the hideous saga into a film.
Read more
5 people found this helpful
Report abuse

safina
5.0 out of 5 stars Reads like a John Grisham thriller
Reviewed in the United Kingdom on 28 April 2022
Verified Purchase
Like a John Grisham novel this case, fortunately, had a happy ending where the dispossesed, powerless and poor people get the justice they deserve. Though it appears that this is just the opposite in the US Justice system which is designed to protect the wealthy and corrupt. Over the pond in the UK, we have had the likes of Savile being protected by the BBC, the police, the justice system and even Royalty.
Read more
Report abuse

Mauve Peace
5.0 out of 5 stars Great read!
Reviewed in the United Kingdom on 19 July 2020
Verified Purchase
One man got the better of Jeffrey Epstein, and that was lawyer Brad Edwards. Well written and well edited. A page turner.
Read more
4 people found this helpful
Report abuse
See all reviews