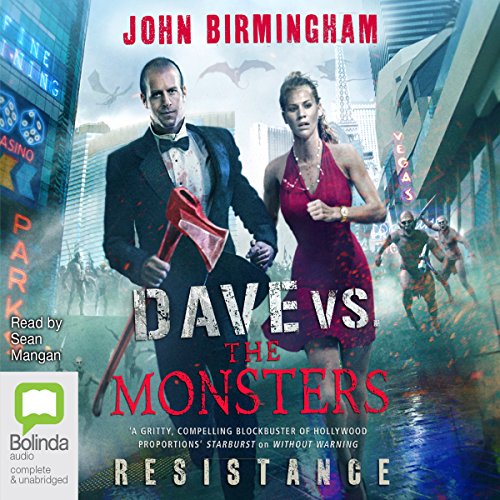 In the second thrilling instalment in John Birmingham's best-selling Dave Hooper series, a dragon brings down the vice president's plane, a monster army is camped outside Omaha and an empath demon springs an undercover operation in New York.

Two bright geometric shapes, metallic flashes picked out in the morning sun, moving impossibly fast and straight amidst the visual clutter and chaos of forest and rock...

"Is it dragons, Dave, is that what it is? Because I'm not ready for dragons...."

New Orleans was just the beginning. New and different demons are breaking through all over America, and Dave Hooper has a new enemy with more guile and guts than the celebrity superhero, still stumbling in his role as champion. While his agent fields offers for movies and merchandise, Dave is tasked with ending a siege in Omaha, saving his friends and deciphering the underrealms' plans to take over the Earth.

As an ancient and legion evil threatens to destroy mankind, Dave has to decide what kind of man he wants to be and the nature of his role in this new world. He may not be the hero humanity deserves, but he's the only one we've got.

Read more
©2015 John Birmingham (P)2015 Bolinda Publishing Pty Ltd
Previous page
Next page
Learn more about membership
By completing your purchase, you agree to Audible’s Conditions Of Use and Privacy Notice.
Sold and delivered by Audible, an Amazon company

4.4 out of 5 stars
4.4 out of 5
4 global ratings
How are ratings calculated?
To calculate the overall star rating and percentage breakdown by star, we don’t use a simple average. Instead, our system considers things like how recent a review is and if the reviewer bought the item on Amazon. It also analyses reviews to verify trustworthiness.

james manning
5.0 out of 5 stars John Birmingham
Reviewed in the United Kingdom on 2 May 2021
Verified Purchase
Dad like them
Read more
Report abuse

Autolycus
5.0 out of 5 stars The middle book - not a standalone - but now our hero's not alone...
Reviewed in the United Kingdom on 10 October 2015
Verified Purchase
This is the second in this trio and well worth looking at if you like a little gory chop-em-up now & then for light reading... And I've also ordered the last in this set plus another Birmingham trio, so JB must be doing something right...! Great fun.
Read more
Report abuse

singularly simple
5.0 out of 5 stars Five Stars
Reviewed in the United Kingdom on 19 May 2018
Verified Purchase
fun fun fun, funny, original. like buffy without the pretentious bs. and funny, did i say funny ?
Read more
Report abuse

Steve Prodger
3.0 out of 5 stars Three Stars
Reviewed in the United Kingdom on 4 May 2016
Verified Purchase
good book not as good as the first
Read more
Report abuse
See all reviews