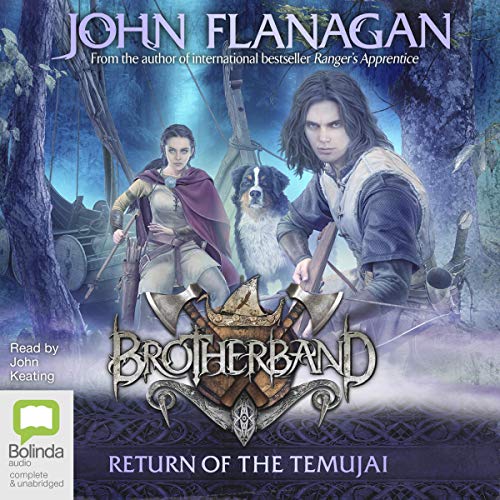 The Herons take to the high seas in the action-packed eighth instalment of the Brotherband Chronicles.

In a battle of Skandians vs Temujai, the brotherband are facing their most formidable enemy yet.

The Heron brotherband are home in Skandia - but their usually peaceful country is in danger. The Temujai have never given up on their ambition to claim Skandia for their own. The ruthless warriors from the Eastern Steppes waited a number of years after the Skandians thwarted them last time - with the help of the legendary Rangers of Araluen - but now they're on the move.

The Skandians are concentrating their defences on the one pass through the mountains, and they're ready for battle - but what if the Temujai can find another way down to the coast? Erak sends Hal and his crew to investigate.

And stop the Temujai - whatever it takes.

Switch between reading the Kindle book & listening to the Audible narration with Whispersync for Voice.
Get the Audible audiobook for the reduced price of $37.22 after you buy the Kindle book.
Learn more about membership
By completing your purchase, you agree to Audible’s Conditions Of Use and Privacy Notice.
Sold and delivered by Audible, an Amazon company

4.8 out of 5 stars
4.8 out of 5
1,120 global ratings
How are ratings calculated?
To calculate the overall star rating and percentage breakdown by star, we don’t use a simple average. Instead, our system considers things like how recent a review is and if the reviewer bought the item on Amazon. It also analyses reviews to verify trustworthiness.

Kindle Customer
2.0 out of 5 stars Rather a boring addition to the series
Reviewed in Australia on 30 October 2019
Verified Purchase
After the previous books in the series this seemed to be a formula book. The characters did not grow or change or do anything that had not been done before. It appeared to be parts taken from other books in the series and joined together to make this book. It looked like the author had run out of ideas for the Brotherband.
Read more
Helpful
Report abuse

Claire E Sage
5.0 out of 5 stars amazing
Reviewed in Australia on 8 October 2019
Verified Purchase
This book was amazing. I loved how they had the temujai involved in these books because I think they are some of the toughest people the Herons have faced
Read more
One person found this helpful
Helpful
Report abuse

Zulu Warrior
4.0 out of 5 stars Final Book in the Series
Reviewed in the United Kingdom on 20 March 2020
Verified Purchase
Hal and the crew of the Heron are sent to the border to keep an eye on the Temujai, Fort Ragnak that protected the pass had 15 archers and 30 fighting men, Hal had designed a large crossbow and took the components with them to construct on the defences, Lydia went to scout the Temujai and came across a huge camp, it could easily be there entire force, two days later they attacked, after they were fought off Hal and his crew returned to Skandia

It was important for the Temujai to reach the sea so they could expand their empire, there was only one route left they would have to come down ice river, Hal was sent with his crew on the Heron to see what they were doing, it was a long journey including having to take the Heron overland to be able to launch past rapids, they met with many small encounters with the Temujai, Hal had a plan, kidnap their leader, during this process Thorn and the rest of the crew had to hold a pass against an overpowering enemy
Read more
Report abuse

Kelly Markham
5.0 out of 5 stars Very enjoyable reac
Reviewed in the United Kingdom on 19 December 2019
Verified Purchase
My son (aged 11) loves these books- has read and reread all of them.
Read more
Report abuse

Barry Cleveland
4.0 out of 5 stars Outstanding
Reviewed in Canada on 15 November 2021
Verified Purchase
My Grandson thought it was better than sliced bread...He enjoyed reading the whole series very much
Thank you
Barry
Read more
Report abuse

LittleBlessings
5.0 out of 5 stars Great Series
Reviewed in Canada on 21 February 2021
Verified Purchase
My kids devoured the books written by this author. They are read all his series and they can't wait for the next books.
Read more
Report abuse
See all reviews