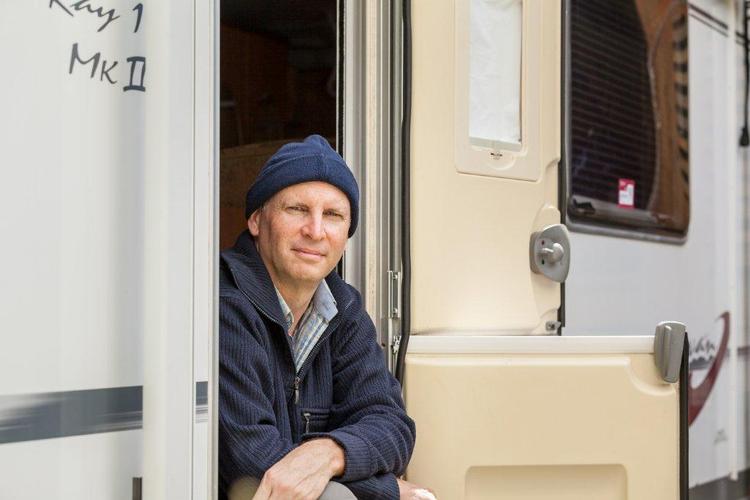 by John Ahern (Author), Michael Veitch (Reader)
4.6 out of 5 stars 30 ratings
See all formats and editions
Sorry, there was a problem loading this page. Try again.

It's a life-changing trip. Take it! John Ahern had a high-flying job, big house, loving wife and two great kids. But if this was success, why did he sense he was failing as a husband and father? So John did something insane. He quit the corporate world and bought a busted-up campervan online to chase an improbable dream: a year travelling together as a family ... on the road with kids. From the North Pole to Africa's highest peaks, John and his family get mugged by monkeys, charmed by snake handlers, and challenged by life without phone and email. Along the way John creates a life less ordinary and evolves into a connected partner and Dad. On the Road with Kids is a funny, messy and inspiring adventure all families will love.
Read more
Previous page
Next page

On the Road with Kids is a funny, messy and inspiring adventure all families will love.

John has travelled to over 80 countries and been shot at, poisoned, tear-gassed, robbed at gunpoint and locked up in an African jail. He has also stowed away in a Colombian cargo plane, ridden across countries on the back of trucks and the roofs of buses, flown in an ultralight over the Zambezi, and been a passenger in two train derailments. He now lives in the comparative safety of the Currumbin Valley with his wife and two children.

Michael Veitch is a multi-talented writer, performer and presenter. He has an academic background in history but made his name as part of the ABC’s cult hit The D-Generation, followed by Fast Forward, Full Frontal and more. For five years he was the face of ABC television’s national weekly arts program, Sunday Arts, followed by a three year stint on ABC Radio, broadcasting across Tasmania and Victoria.
Start reading On the Road ... with Kids on your Kindle in under a minute.

John was born in Brisbane, Queensland and grew up in Redcliffe where he roamed the beaches and played backyard cricket with his mates. His career spanned from mowing lawns and packing groceries to get through university; to being the Global Head of Corporate Real Estate and M & A for a public listed company.

In between serious bouts of work, John has travelled through over 80 countries and been shot at, poisoned, tear-gassed, robbed at gunpoint and locked up in an African jail. He has also stowed away in a Colombian cargo plane, ridden across countries on the back of trucks and the roofs of buses, flown in an ultralight over the Zambezi, and been a passenger in two train derailments.

He now lives with his wife and two children in the comparative safety of the Currumbin Valley on Australia’s Gold Coast. He considers it their base camp for new adventures.

4.6 out of 5 stars
4.6 out of 5
30 global ratings
How are ratings calculated?
To calculate the overall star rating and percentage breakdown by star, we don’t use a simple average. Instead, our system considers things like how recent a review is and if the reviewer bought the item on Amazon. It also analyses reviews to verify trustworthiness.

Shelley Altman
5.0 out of 5 stars A great travel log of how to hit the road with young kids.
Reviewed in Australia on 6 December 2015
Verified Purchase
Such a honest heartwarming and genuine narration. Full of admiration and a touch of envy for this this family lucky enough to share this experience together.
Read more
Helpful
Report abuse

Amazon Customer
4.0 out of 5 stars Going to Europe? Worth a read
Reviewed in Australia on 27 April 2015
Verified Purchase
I initially found the way the author put himself down a little grating, but it eventually won me over. It's an inspiring book, and the insights into how a trip like this clashes with every day life is well worth the read. I would have liked a bit more clarity on the route that he took (a map perhaps?) but appreciated the cost breakdown at the end.
Read more
One person found this helpful
Helpful
Report abuse

R Joyce
5.0 out of 5 stars I love it
Reviewed in Australia on 10 September 2014
Verified Purchase
Hilarious read for anyone with ankle biters and a dream to leave the rat race
Read more
Helpful
Report abuse

Stephanie Buick
4.0 out of 5 stars An inspiring read.
Reviewed in the United Kingdom on 7 July 2016
Verified Purchase
A lighthearted account of the family's trip around Europe in a camper van. The author's introspection and self-honesty - being driven demented by the lack of space at the beginning of the trip, for example - add depth to the narrative.

I would have liked more visual descriptions of their surroundings and rather less football. The book would have benefited from some fine editing - there were a few mish-mashed sentences that had been overlooked. These are minor points though. It was an easy to read, and sometimes very funny, book. A source of inspiration to anyone thinking of travelling with children. They managed to plough through their initial adjustment difficulties, leading to familial closeness and a new business enterprise.
Read more
2 people found this helpful
Report abuse

Mummy More
5.0 out of 5 stars Interesting, funny and thought provoking
Reviewed in the United Kingdom on 21 July 2016
Verified Purchase
I thoroughly enjoyed reading this account of one family travelling around Europe with their young kids. It was funny at points and made me dream about doing similar. The kids are young so it didn't address schooling but otherwise it does address many of the issues families who make such a step will face.
Read more
Report abuse

Kindle Customer
5.0 out of 5 stars Easy Reading
Reviewed in the United Kingdom on 19 July 2019
Verified Purchase
If you like easy to read travel stories, then this is for you. I read it years ago when borrowed from the local library, and enjoyed it so bought it for the Kindle to read again
Read more
One person found this helpful
Report abuse

Paul
5.0 out of 5 stars Inspiration
Reviewed in the United Kingdom on 12 January 2019
Verified Purchase
From an ex New Malden Flightie to another...I may be following in your footsteps after reading this. Thanks very much
Read more
Report abuse

Pin
5.0 out of 5 stars Gets the cogs turning
Reviewed in the United Kingdom on 8 September 2017
Verified Purchase
Inspiring read. I truly admire the passion and joie de vivre of this couple. Not usually my genre but I thoroughly enjoyed every bit of this novel
Read more
Report abuse
See all reviews