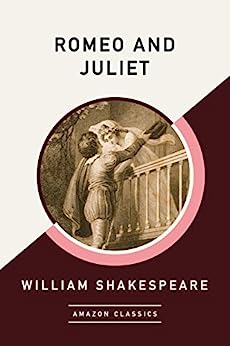 by William Shakespeare (Author) Format: Kindle Edition
See all formats and editions
Sorry, there was a problem loading this page. Try again.

When the feud between the Montagues and Capulets spills into the streets of Verona, a great love must be kept secret—that of Romeo, son of Montague, and Juliet, daughter of the sworn enemy. But only a tragic twist of fate can promise peace.

When Shakespeare staged Romeo and Juliet in 1594, it was already a centuries-old Italian tale that had been translated and adapted in verse and prose by a number of poets and storytellers. Out of the common threads of those now-forgotten works, Shakespeare created not only one of his most popular plays, but one that would become the archetypal love story of the English language.

William Shakespeare (1564–1616) was born in Stratford-upon-Avon, Warwickshire, to a middle-class glover and landowner’s daughter. He married Anne Hathaway in 1582 and moved to London to work with a theatrical troupe ten years later.

Since little has been learned of his early life, nearly all of what we know about Shakespeare begins—on the London stage—in 1592. In the wake of his critical and public success, Shakespeare helped build the Globe theater on the River Thames.

Regarded as the world’s preeminent dramatist, his extant works include thirty-eight plays, one hundred and fifty-four sonnets, and two narrative poems, and have been translated into every major language. To this day, his plays have been performed more often than those of any other playwright—adapted for film and television, updated, deconstructed, and transfigured into ballets, operas, and musicals. Though his formal education exceeded no further than grammar school, William Shakespeare became the most transcendent and influential writer in all of world literature.

4.4 out of 5 stars
4.4 out of 5
808 global ratings
How are ratings calculated?
To calculate the overall star rating and percentage breakdown by star, we don’t use a simple average. Instead, our system considers things like how recent a review is and if the reviewer bought the item on Amazon. It also analyses reviews to verify trustworthiness.

There are 0 reviews and 5 ratings from Australia

D S
4.0 out of 5 stars Loved it
Reviewed in the United Kingdom on 17 January 2020
Verified Purchase
Never read it before fully, took me some time because I had to look up a lot of words but really liked it.
Read more
Report abuse

Nichola Briggs
5.0 out of 5 stars Brought for an English literature essay.
Reviewed in the United Kingdom on 24 January 2018
Verified Purchase
If you do not understand the language used in the 1500s i would suggest buying a GCSE guide copy of this. I personally loved this one in all its natural glory.
Read more
Report abuse

Vamshi kiran
2.0 out of 5 stars Reading this book directly is better than reading it in device
Reviewed in India on 20 September 2019
Verified Purchase
This is book is good one but I think reading this book in electronic devices is not seems me satisfied as I read the book on my hand. it is better to read book directly than reading the book in the devices.author in this book explains in a very good understanding manner to all the every one who is able to read and understand.language of the book is easy to understand.the only thing I am not satisfied with this is reading it in device.
Read more
5 people found this helpful
Report abuse