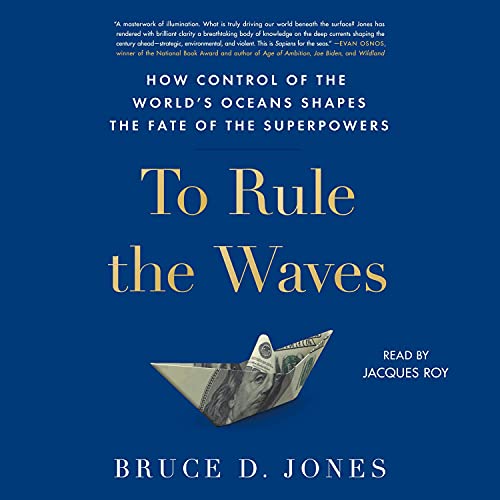 To Rule the Waves: How Control of the World's Oceans Determines the Fate of the Superpowers

From a brilliant Brookings Institution expert, an “important” (The Wall Street Journal) and “penetrating historical and political study” (Nature) of the critical role that oceans play in the daily struggle for global power, in the best-selling tradition of Robert Kaplan’s The Revenge of Geography.

For centuries, oceans were the chessboard on which empires battled for supremacy. But in the nuclear age, air power and missile systems dominated our worries about security, and for the United States, the economy was largely driven by domestic production, with trucking and railways that crisscrossed the continent serving as the primary modes of commercial transit.

All that has changed, as nine-tenths of global commerce and the bulk of energy trade is today linked to sea-based flows. A brightly painted 40-foot steel shipping container loaded in Asia with 20 tons of goods may arrive literally anywhere else in the world; how that really happens and who actually profits from it show that the struggle for power on the seas is a critical issue today.

Now, in vivid, closely observed prose, Bruce Jones conducts us on a fascinating voyage through the great modern ports and naval bases - from the vast container ports of Hong Kong and Shanghai to the vital naval base of the American Seventh Fleet in Hawaii to the sophisticated security arrangements in the Port of New York. Along the way, the book illustrates how global commerce works, that we are amidst a global naval arms race, and why the oceans are so crucial to America’s standing going forward.

As Jones reveals, the three great geopolitical struggles of our time - for military power, for economic dominance, and over our changing climate - are playing out atop, within, and below the world’s oceans. The essential question, he shows, is this: who will rule the waves and set the terms of the world to come?

4.3 out of 5 stars
4.3 out of 5
72 global ratings
How are ratings calculated?
To calculate the overall star rating and percentage breakdown by star, we don’t use a simple average. Instead, our system considers things like how recent a review is and if the reviewer bought the item on Amazon. It also analyses reviews to verify trustworthiness.

jack greene
4.0 out of 5 stars Valuable book BUT needs some stuff
Reviewed in the United States on 24 September 2021
Verified Purchase
Bruce D. Jones has written a valuable book. NO question about THAT. I am passing my copy on to a friend who served in the merchant marine. BUT it lacks maps for starts. I know most of where & what he is writing about but a layman would not. Also, there are a fair number of stupid and poor editing errors in it. Norway was NOT building massive submarine pens before World War II (p. 21) - heck they did not even maintain the subs they had (I co-authored a book on this - HITLER STRIKES NORTH). The USN did not destroy the Tripoli pirates at Tripoli in our war with them (p. 75). Jones is much better on more contemporary stuff. Jones needs smarter editing and a publisher who will put REAL photographs and REAL maps into his stuff.
Read more
26 people found this helpful
Report abuse

Andrew Updegrove
3.0 out of 5 stars Content Four Stars; Editing Zero
Reviewed in the United States on 16 October 2021
Verified Purchase
I’ve never encountered a book like this before. On the one hand, and let’s get this out of the way for those readers who won’t care about what I have to say next, this is a thoughtful and worthwhile treatment of its topic. If you’re interested in the role of naval power, you'll learn a lot, although, as another reviewer has already noted, you'll be annoyed by the absence of maps, which are essential to fully appreciate the author's analysis.

But on the other hand this is the only book I have ever read that can’t possibly have been edited. Proofread, yes (I only found one error). But for accuracy? Not at all. This wasn’t as evident in the beginning of the book but as I got farther in, the number of inaccuracies multiplied to the point where there was sometimes a howler every few pages. Here is just a sampling of the dozens of careless mistakes I encountered:

“The exception is the poles, where the ice caps and the sea ice are (until recently) covered with snow year-round. As the atmosphere warms, some of that snow cover melts, exposing the terrain, much darker than the snow” - Except that there is no terrain under the North polar ice cap – it’s only floating ice.

“But carbon is of course also a naturally occurring chemical in the atmosphere” – Except that carbon of course is an element, not a chemical.

“The project attracted excitement and attention—in part due to the lyrical writing of a journalist assigned to cover the story for Life magazine, a young John Steinbeck.” – Except that Steinbeck was 62 years old when he wrote this article; he died six years later.

“Somewhat less famous, but arguably the most influential marine biologist of the modern era, was Jane Lubchenco” - Except that she’s still alive, working, and influential.

“Petroleum is not the first fuel that industrialized societies have extracted from the oceans; that distinction belongs to the oil that comes from rendering the fat of sperm whales” – Except that it was extracted from many other species of whales as well.

“For the past hundred and fifty years, the main story of energy was the story of oil” – except that oil was only one of several sources of heating and lighting energy in the 1800s and did not become a meaningful fuel for ships or locomotives and the advent of automobiles until the 1900s, decades later.

“And many of them don’t carry the Automated Identification System transponders—ships’ equivalent to airplanes’ black boxes” – Except that an aviation black box is a device for recording data relevant to accident investigations and does not function as a real time location transponder.

“submarines are designated SSN; those that can launch nuclear weapons are designated SSBN. The SS signifies submarine; the G denotes a guided missile; and the N tells us that the submarine is nuclear-powered” – Except the acronym the author is explaining is “SSBN,” and the B stands for ballistic missile.

“Inside, the room is roughly thirty feet square, with an eight-foot ceiling. The walls and ceiling are painted black, which helps absorb the heat from a huge amount of computing power (plus up to two dozen bodies crowded into this small space) and keeps things dark” - Except that thirty square feet would mean a six by five foot room – those two dozen bodies must have been crowded indeed.

In one chapter, the footnotes signaled in the text are designated by both Arabic and Roman numerals and are sometimes out of order – and then the footnote text doesn’t appear at all at the end of the chapter.

“Perim Island is a small, crab-shaped island in the Red Sea, two miles deep and three miles wide” – Except that I’m guessing he means wide rather than deep.

I can’t imagine how this book got into print in the form it’s in. It needs to be withdrawn, properly re-edited, and then reissued.
Read more
21 people found this helpful
Report abuse

PHLXCISO
5.0 out of 5 stars Great book especially in conjunction with the book The Strategy of Denial
Reviewed in the United States on 22 December 2021
Verified Purchase
Together these books lay out China's ongoing strategy to isolate and weaken the U.S. to a second rate power to China. This strategy is already well under way and is already one that the U.S. can't stop alone short of nuclear war without a major alliance with countries such as India, Japan, S.Korea and many others.
China's plan is the old discredited Domino Theory. The problem for the U.S. in Southeast Asia was that after Vietnam fell all the other countries all went Communist but each was different and they had no leader so they were no threat to the US.
China's plan is different. They Will start with Taiwan and hop one island to the next a annexing S. Korea and the Phillipense and finally Japan then they will cut the U.S. out of trading with Asia, drastically damaging the U.S. economically.hi
Read more
5 people found this helpful
Report abuse

Lee
5.0 out of 5 stars Fantastic, Must Read
Reviewed in the United States on 14 January 2022
Verified Purchase
A wide ranging book that spans our use of the oceans going back. 700+ years, through the age of empires, technologies that shape our world today - containerization, global trade, through political and military conflicts both current and potential, then finally, both the clearest and most thorough explanation of the discovery of global warming - 1957 US Navy - and its potential effects. A truly fantastic book.
Read more
3 people found this helpful
Report abuse

Celeste Beron
5.0 out of 5 stars Required reading for us all
Reviewed in the United States on 14 December 2021
Verified Purchase
GREAT DOCUMENTATION OF THE SITUATION PRESENTED WITH FASCINATING WRITING The addition of a map would be nice..
Read more
4 people found this helpful
Report abuse
See all reviews