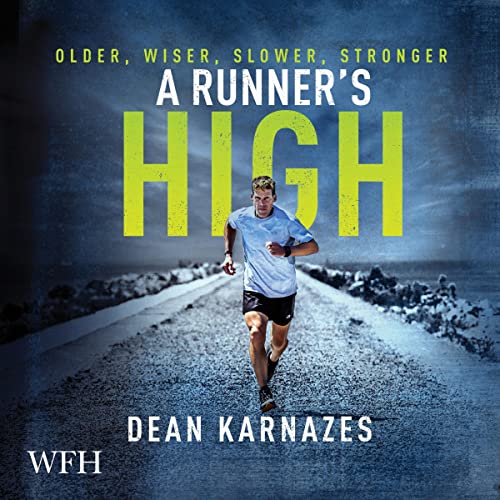 Dean Karnazes has pushed his body and mind to inconceivable limits, from running in the shoe-melting heat of Death Valley to the lung-freezing cold of the South Pole. He's raced and competed across the globe and once ran 50 marathons, in 50 states, on 50 consecutive days.

In A Runner's High, Karnazes chronicles his return to the Western States 100-Mile Endurance Run in his mid-50s after first completing the race decades ago. The Western States, infamous for its rugged terrain and extreme temperatures, becomes the most demanding competition of his life, a physical and emotional reckoning and a battle to stay true to one's purpose. Confronting his age, wearying body, career path and life choices, we see Karnazes as we never have before, raw and exposed. A Runner's High is both an endorphin-fuelled story and a love letter to the sport from one of its most celebrated ambassadors.

4.6 out of 5 stars
4.6 out of 5
567 global ratings
How are ratings calculated?
To calculate the overall star rating and percentage breakdown by star, we don’t use a simple average. Instead, our system considers things like how recent a review is and if the reviewer bought the item on Amazon. It also analyses reviews to verify trustworthiness.

Damian
5.0 out of 5 stars Deano, another amazing, inspirational, honest and humble book...
Reviewed in Australia on 23 July 2021
Verified Purchase
Deano, another amazing, inspirational, honest and humble book, you ARE an amazing inspiration for so many people, runners and non-runners alike. Your passion for the pursuit and also your Greek heritage drawing on the many runs and ancient stories like Marathon have always drawn me to your books and also follow you on social media. Thanks again for a great book, you have given me the kick in the pants to get back out there and run. Stay safe and keep well, Damian
Read more
One person found this helpful
Helpful
Report abuse

Gerard
5.0 out of 5 stars A sacred connection
Reviewed in Australia on 10 April 2022
Verified Purchase
This is another great read in a long list of Deans books.
After reading the Road to Sparta I got up and ran 100 miles to honour Pheidippides and the ability of Dean to put into words the experience of that journey.
This book is more of the same. As I enter my 68th year questions Dean is asking of himself are the same as mine and the answers are the same. We are kindred spirits and your journey Dean is inspiring
Read more
Helpful
Report abuse

Jamie
5.0 out of 5 stars Another great book by Dean
Reviewed in Australia on 25 October 2021
Verified Purchase
I would rate this as Dean’s best book. Once I got started there was no stopping. This is a brutally honest book of the authors Western States 100 mile race after a few years being absent and believe me, you suffer with him. The other aspect of the bookthat I really enjoyed was Dean’s philosophical reflection on being an ageing athlete, parent and the uncertainty of the future. Highly recommend this one.
Read more
Helpful
Report abuse
See all reviews

stuboy68
5.0 out of 5 stars His most personal book yet
Reviewed in the United Kingdom on 24 November 2021
Verified Purchase
Dean shows us he is human 😄in this book we get to see Dean at his most vulnerable, questioning his reasons for running, eventually realising it's for the love of running itself a great book inspiring and a reminder that it's not all about finish times or medals or positions it's the ability to run and to enjoy it
Read more
Report abuse

Amazon Customer
5.0 out of 5 stars If you like Dean you'll love this book
Reviewed in the United Kingdom on 10 September 2021
Verified Purchase
A great mixture of humour, insight and what it takes to keep going when odds are against us. Also a great reminder that running is a lifetime journey if we dare to persist. Thanks for the ongoing inspiration Dean, hoping for future books. Readers-Road to Sparta is equally as interesting and inspirational
Read more
One person found this helpful
Report abuse