This item will be released on August 3, 2022.
Pre-order now.
International Product from outside Australia
Delivery rates Return policy 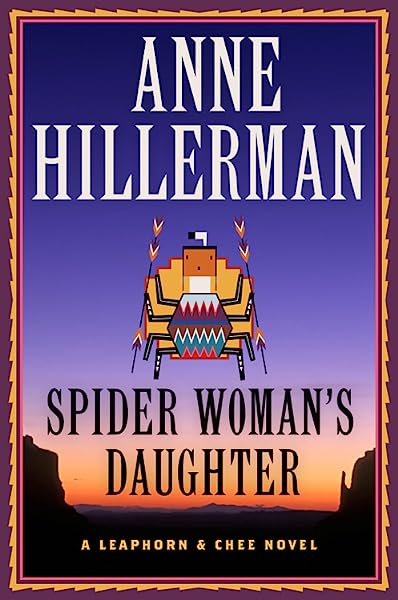 by Anne Hillerman (Author)
4.5 out of 5 stars 2,723 ratings
Book 25 of 25: Leaphorn, Chee & Manuelito
See all formats and editions
Sorry, there was a problem loading this page. Try again.
Pre-order Price Guarantee. Details

“A fine legacy series . . .  in the spirit of her late father, Tony.”—Booklist

An ancient mystery resurfaces with ramifications for the present day in this gripping chapter in the Leaphorn, Chee & Manuelito series from New York Times bestselling author Anne Hillerman.

Sergeant Jim Chee’s vacation to beautiful Antelope Canyon and Lake Powell has a deeper purpose. He’s on a quest to unravel a sacred mystery his mentor, the Legendary Lieutenant Joe Leaphorn, stumbled across decades earlier.

Chee’s journey takes a deadly turn when, after a prayerful visit to the sacred Rainbow Bridge, he spots a body floating in the lake. The dead man, a Navajo with a passion for the canyon’s ancient rock art, lived a life filled with many secrets. Discovering why he died and who was responsible involves Chee in an investigation that puts his own life at risk.

Back in Shiprock, Officer Bernadette Manuelito is driving home when she witnesses an expensive sedan purposely kill a hitchhiker. The search to find the killer leads her to uncover a dangerous chain of interconnected revelations involving a Navajo Nation cannabis enterprise.

But the evil that is unleashed jeopardizes her mother and sister Darleen, and puts Bernie in the deadliest situation of her law enforcement career.

Anne Hillerman's taken familiar characters and locations and struck out on a literary legacy all her own." -- Craig Johnson, author of the Walt Longmire Series

I truly love the continuing series of novels by Anne Hillerman featuring Joe Leaphorn, Jim Chee, and Bernadette Manuelito--who are, each in their own way, fictional characters for the ages. -- Douglas Preston, New York Times bestselling author

"The Tale Teller is more than just a police procedural set in the Southwest; it's a reading experience not to be missed. Anne Hillerman has reached a new level of storytelling in this one, and she deserves recognition as one of the finest mystery authors currently working in the genre." -- New York Journal of Books on The Tale Teller

"Tony Hillerman fans will appreciate her keeping his fictional creations, Jim Chee and Joe Leaphorn, alive and thriving. The storytelling gene has been proudly passed on from father to daughter." -- Bookreporteron Stargazer

"Hillerman's writing becomes stronger with every new installment in the series, deepening the development of each character. . . . The picturesque Southwest, as well as the history of the Navajo, come through on each page." -- Library Journal (starred review) on The Tale Teller

"Hillerman seamlessly blends tribal lore and custom into a well-directed plot, continuing in the spirit of her late father, Tony, by keeping his characters (like Chee) in the mix, but still establishing Manuelito as the main player in what has become a fine legacy series." -- Booklist on Song of the Lion

"The latest from Hillerman continues worldbuilding in a tale that will reward long-term readers." -- Kirkus Reviews on Song of the Lion

"Fans of Leaphorn, Chee, and Manuelito, characters created by the author's father, Tony Hillerman, will savor this multilayered story of suspense, with its background of contemporary environmental vs. development issues." -- Library Journal on Song of the Lion

Anne Hillerman is an award-winning reporter, the author of several non-fiction books and the daughter of New York Times bestselling author Tony HIllerman. She lives in Santa Fe, New Mexico, and this is her fourth novel.
Start reading The Sacred Bridge on your Kindle in under a minute.

Her second, "Rock with Wings," received the New Mexico Book Awards’ Founders’ Award. The third novel in the reinvigorated series, "Song of the Lion," was a finalist for New Mexico's Zia Award. In that story, Bernie and Chee go the Grand Canyon and Tuba City, Arizona to solve a crime that begins with a deadly explosion. Next came "Cave of Bones" which took the reader to the mysterious and majestic lava landscape of El Malpais for a story that concerns a missing person, possible misuse of tribal funds, and combative mothers-in-law.

The fifth novel in the series "The Tale Teller," released in April, 2019, brings legendary Lieutenant Joe Leaphorn back as a full-fledged crime solver.

Anne also is the author of "Tony Hillerman's Landscape: On the Road with Chee and Leaphorn" with husband/photographer Don Strel. In collaboration with St. Martin’s Press she established The Tony Hillerman Prize for best first mystery novel set in the Southwest.

Anne belongs to many writers’ organizations and served on the board of Western Writers of America. In 2019, she was deeply honored to receive the Frank Waters Award for literary excellence. She gave the annual Rudolfo and Patricia Anaya Lecture on the Literature of the Southwest at the University of New Mexico. She is a frequent presenter at the Tucson Festival of the Book, Malice Domestic and Bouchercon and has represented New Mexico at the National Book Festival hosted by the Library of Congress.

She lives and works in Santa Fe with trips to the Navajo Nation.

4.5 out of 5 stars
4.5 out of 5
2,723 global ratings
How are ratings calculated?
To calculate the overall star rating and percentage breakdown by star, we don’t use a simple average. Instead, our system considers things like how recent a review is and if the reviewer bought the item on Amazon. It also analyses reviews to verify trustworthiness.

David Taylor
5.0 out of 5 stars Another wonderful novel.
Reviewed in Canada on 22 April 2022
Verified Purchase
it's so wonderful to know that Anne Hillerman has kept her father's characters alive through her books. Her addition of new characters makes them even more special. Just received my copy of The Sacred Bridge about a week ago and already thoroughly immersed in it. Thank you Anne!!
Read more
Report abuse

Daune Robinson
1.0 out of 5 stars Unimaginative and predictable
Reviewed in the United States on 14 April 2022
Verified Purchase
I’ll start this review by admitting that I hate, really hate, books about people who do undercover work. So clearly this wasn’t going to be one of my favorite books because Bernie, after seeing a gruesome hit and run murder goes undercover. I wish I could say that in spite of that the book was good - but it wasn’t. It may well be the last Hillerman book I read - it was that bad. The book essentially was split into two stories - one involving Bernie agonizing over seeing a gruesome murder and going undercover to try to find information about the people who had done it and the second story involving Chee getting involved in a murder investigation while on vacation.

The storyline with Bernie was annoying and stupid. She was determined to be involved in a case that was DEA territory because she saw a man die. You know who the bad guys are right away and her “undercover investigation” is unrealistic and the results forseeable. The “good ending” was unimaginative and unrealistic.

The storyline involving Chee was equally foolish and I knew who the bad guy was almost immediately. The “discovery” of whodunnit was unimaginative and made Chee seem stupid and incompetent. The ending was annoying and unrealistic - just as the Bernie part was. No intrigue, no mystery - just mundane murder and stupidity.

I am beyond disappointed also with the hints of future stories and I suspect I won’t waste money on any more of these books that I once loved. I don’t know whether Anne Hillerman has simply run out of ideas, or simply got tired of the characters her father created. Either way, it is a sad ending to a long history of beautifully described culture and natural beauty of the Navajo Nation people and environment.
Read more
21 people found this helpful
Report abuse
See all reviews