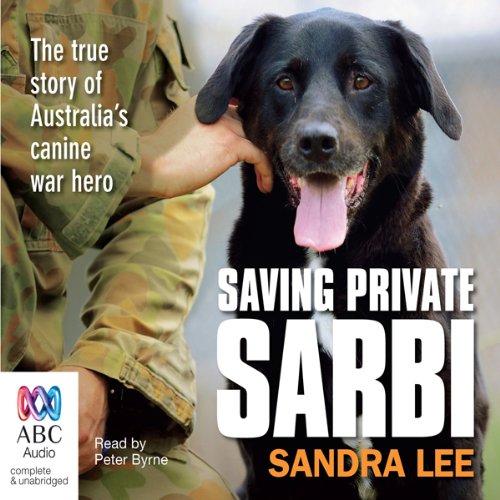 Lost for 13 months in the wilds of Afghanistan, this is the dramatic, heart-warming and truly amazing story of Sarbi, the Army's most famous explosives detection dog - the miracle dog of Tarin Kot. Powerful, dramatic, heartwarming, this is the true story of Sarbi, the scruffy black Labrador-cross trained by the Australian Army as an explosives detection dog for the most dangerous combat mission imaginable. Thirteen months after Australia's most famous canine warrior went missing in action following an historic battle between the elite SAS and the Taliban in Afghanistan in 2008, she was found by an American Special Forces officer patrolling a village in a region known to be a Taliban stronghold. Against all odds, Sarbi had survived her injuries, the enemy's weapons, a bitter winter, one brutal summer and the harsh unforgiving landscape on her own. She was the miracle dog of Tarin Kot. Sarbi's story, and those of the other brave Australian Army dogs in Afghanistan, will resonate with anyone who has known the unconditional love of man's best friend, and understands the rewards of unbidden loyalty, trust and devotion. It will appeal to all those who appreciate the selflessness of serving your country and the inherent dangers of putting your life on the line for others in a war zone. And it will strike a chord with anyone who has experienced the magical connection with a dog.

4.2 out of 5 stars
4.2 out of 5
22 global ratings
How are ratings calculated?
To calculate the overall star rating and percentage breakdown by star, we don’t use a simple average. Instead, our system considers things like how recent a review is and if the reviewer bought the item on Amazon. It also analyses reviews to verify trustworthiness.

hlkiwi
4.0 out of 5 stars A Great Read the journey of Private Sarbi.
Reviewed in Australia on 4 June 2014
Verified Purchase
A book I thoroughly enjoyed beginning to end, the journey of Private Sarbi. It provides insight into the training the Explosive Detection Dogs (EDD) are taken through, to develop the necessary close bond required for operational deployment between handler and dog. The interaction and respect the dogs earn as a result of their work is highlighted by the dogs acceptance by the soldiers comes through as the book is read. An important aspect of one part of a Sappers' battlefield work as dog handlers who search for munitions and IED's now recorded, and written in such a way it provides a great insight. Dog lovers should find this a great read, I certainly did. There is emotion, tension, tragedy and unwavering canine loyalty.
Read more
Helpful
Report abuse

RobbieK
3.0 out of 5 stars For the absolute dog lover.
Reviewed in Australia on 8 May 2015
Verified Purchase
I enjoyed parts of it but got a bit bored, so didn't finish it. I'll go back one day as I like to finish all my books. Maybe on a long haul flight!
Read more
Helpful
Report abuse
See all reviews

Ddronfield
5.0 out of 5 stars gripping, heartwarming.
Reviewed in the United Kingdom on 10 January 2015
Verified Purchase
Fast pace, the fact that it's a true story, the relationship between man and dog. An insight into the life of soldier in Afghanistan , the sacrifices of the soldiers and dogs working together to keep each other safe.
Read more
One person found this helpful
Report abuse

gigglewhizz
2.0 out of 5 stars Not for me
Reviewed in the United States on 31 January 2014
Verified Purchase
I didn't like Sandra Lee's writing style in this book. I was unable to finish it and read only a few chapters. Sandra Lee's writing was cold, like a military report. I would have liked a warmer approach to describing Sarbi's life. There was no emotional pull in this story, which is what I look for in a story about an animal such as dog's or cats. Perhaps Lee's research was based on military reports about Sarbi and she was influenced by them to take a distant, factual take on this story. Plus she dwelt too much on military hardware and not enough on the people and the dogs. If you like staccato militaristic writing and reading about military hardware and experiences you might like this story but it was not for me.
Read more
Report abuse

Frank Penn
3.0 out of 5 stars Saving Private Sarbi
Reviewed in the United States on 14 February 2013
Verified Purchase
Because of security restrictions, this book was always going to be difficult to write. Although Sandra is an admitted dog lover, I do not think she truly captured the bond some humans and canines have with their partners. I happen to believe that a person cannot "own" a dog anymore than they can own a human. I particularly dislike the way she refers to the dogs as "mutts" and "hounds". and on one occasion she refers to a "Golden Labrador". She did correct this later in the book when she referred to the dog as a "Yellow Labrador". This all suggests to me there is something lacking in the research for the book.
Read more
2 people found this helpful
Report abuse
See all reviews