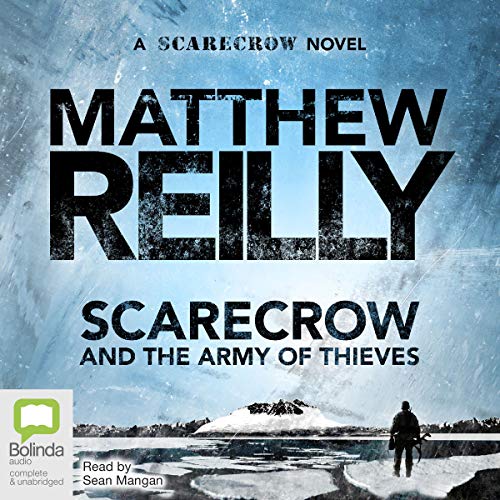 Scarecrow and the Army of Thieves

An old Soviet weapons installation in the Arctic has fallen into disrepair. Known as Dragon Island, the facility is home to a next-generation weapon with the potential to unleash a destructive force upon the world that was developed during the Cold War and subsequently forgotten.

When a terrorist organisation known as the Army of Thieves takes control of the fortified island and activates the weapon, a small band of Marines and civilians is sent in to stop them, as they are the only unit close enough to Dragon Island to be able to reach the installation in time.

Read more
©2011 Matthew Reilly (P)2011 Bolinda Publishing Pty Ltd
Previous page
Next page
Learn more about membership
By completing your purchase, you agree to Audible’s Conditions Of Use and Privacy Notice.
Sold and delivered by Audible, an Amazon company
Share

4.0 out of 5 stars
4 out of 5
2 global ratings
How are ratings calculated?
To calculate the overall star rating and percentage breakdown by star, we don’t use a simple average. Instead, our system considers things like how recent a review is and if the reviewer bought the item on Amazon. It also analyses reviews to verify trustworthiness.

rose barber
3.0 out of 5 stars Good
Reviewed in the United States on 19 April 2021
Verified Purchase
Because the e-book wasn't available I bought this so I had all the books in the Scarecrow series it was a great listening experience my first.
Read more
Report abuse
See all reviews
Back to top
Get to Know Us
Make Money with Us
Let Us Help You
And don't forget:
© 1996-2022, Amazon.com, Inc. or its affiliates