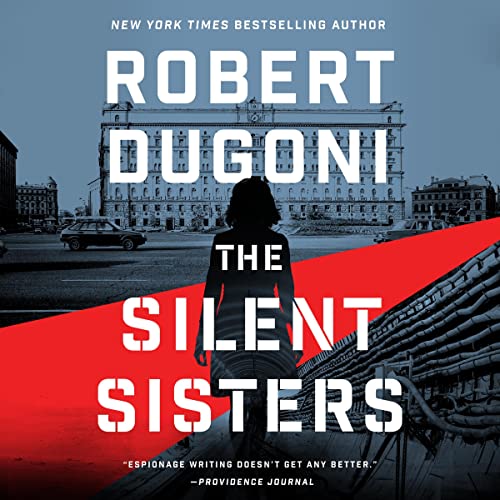 In this pulse-racing thriller by the New York Times bestselling author of The Last Agent, an American sleeper cell in Russia goes silent - and it’s one man’s duty to find them.

After a harrowing escape from Russian agents on his last mission, Charles Jenkins thinks he’s finally done with the spy game. But then the final two of the Seven Sisters - American assets who have been deep undercover in Russia for decades - cut off all communication with their handlers. Are they in hiding after detecting surveillance? Or have they turned and become double agents? It’s Jenkins’s duty to find out, but he’s been added to a Russian kill list. It will require all of Jenkins’s knowledge of spycraft - and an array of disguises - to return to the country undetected.

But plans go awry his first night in Moscow when Jenkins gets involved in an altercation that ends in the death of the son of one of Russia’s most powerful organized crime leaders. Pursued by mafia henchmen, Russian agents, and a particularly dogged Moscow police detective, Jenkins is determined to track down the final two Sisters and get them to America - or die trying. As various forces close in, Jenkins fears this time he might’ve pushed his luck too far.

Final days - Don't miss out!
Learn more about membership
By completing your purchase, you agree to Audible’s Conditions Of Use and Privacy Notice.
Sold and delivered by Audible, an Amazon company

4.4 out of 5 stars
4.4 out of 5
6,619 global ratings
How are ratings calculated?
To calculate the overall star rating and percentage breakdown by star, we don’t use a simple average. Instead, our system considers things like how recent a review is and if the reviewer bought the item on Amazon. It also analyses reviews to verify trustworthiness.

Peter the constant reader
TOP 500 REVIEWER
5.0 out of 5 stars Yells out for reading at high speed
Reviewed in Australia on 17 May 2022
Verified Purchase
Robert Dugoni never disappoints as he presents a spy thriller that is over the top. A tall African American somehow manages to operate in Russia assisted by a well oiled machine that has numerous operatives.

The two last sisters need to be extracted and Charles goes rogue trying to help a woman. He has the FSB, mafia , and police after him. It is all action with split second escapes and negotiations with enemies.
Read more
Helpful
Report abuse

Kindle Customer
5.0 out of 5 stars The Silent Sisters.
Reviewed in Australia on 5 June 2022
Verified Purchase
Well Robert you left the best of the Charles Jenkins trilogy to last. Couldn’t put it down. Took lest than a week to read. I recommend your writing to all.
Read more
One person found this helpful
Helpful
Report abuse

Spoonsoz
5.0 out of 5 stars Terrific trilogy
Reviewed in Australia on 12 May 2022
Verified Purchase
A great balance of action, suspense and basic humanity. An extensive cast of well developed characters all contributing to a memorable reading experience.
Read more
Helpful
Report abuse

Jim Kornmehl
5.0 out of 5 stars a terrific read
Reviewed in Australia on 31 March 2022
Verified Purchase
Sympathetic characters and a great story line. Had trouble putting the book down. Hope there are more stories coming in the Charlie Jenkins series
Read more
Helpful
Report abuse

Kindle Customer
5.0 out of 5 stars Another great read
Reviewed in Australia on 13 March 2022
Verified Purchase
I am so glad to have this author recommend to me. I've thoroughly enjoyed the three books in this series.
Read more
Helpful
Report abuse

Bill M
TOP 500 REVIEWER
5.0 out of 5 stars A superb, tension filled suspense thriller.
Reviewed in Australia on 23 February 2022
Verified Purchase
To me Mr. Dugoni has delivered another superb, tension filled suspense thriller. Charles Jenkins, CIA operative, enters Russia to extract the final two surviving Sisters of the original Seven Sisters who, over decades, provided intelligence to the US. Fearing for their lives, they had gone silent – hence the title. After foolishly intervening to protect a young woman from being attacked by thugs, Charles Jenkins's re-appearance in Russia, sets off alarm bells. Spycraft, misdirection, competing loyalties and moralities make this a great read. The tale is sprinkled with current Russian political names that appear in the western press. The competing loyalties are the struggles of those Russians at the top to retain their power; the loyalties the Russian mafia have and the assistance they provide to Jenkins; the use by the CIA of the mafia. It is a timely book what with the Russian false flag operations, propaganda, and invasion that have in the last few weeks been occurring in the Ukraine. Very highly recommended.
Read more
2 people found this helpful
Helpful
Report abuse

Julie Johnson-begg
TOP 1000 REVIEWER
5.0 out of 5 stars Russia …….The Angry Bear
Reviewed in Australia on 3 March 2022
Verified Purchase
Fact is always more entertaining than fiction - Dugoni takes the contemporary headlines and uses it as a back story to provide the historical context and rationale for the ethos that drives the decision making and drive to regain Russian dominance and the return to a soviet socialist state. The background of the plot is to save the last of the sisters - deep background CIA assets who are being exposed. Jenkins is caught up in a complex plot making his mission difficult to complete without the help of a few friends. The arrogance of the Russian Government knows no bounds. Viva la 🇺🇦 Ukraine.
Read more
Helpful
Report abuse
See all reviews

Mark
5.0 out of 5 stars The Silent Sisters -
Reviewed in the United Kingdom on 5 March 2022
Verified Purchase
This is the third Charles Jenkins’ book in the series and they just keep giving. This time Jenkins returns to Russia to free the final 2 silent sisters. But an event in the bar when he returns to Russia not only means the Russian FSP is after him, but he had made an enemy of somebody he shouldn’t. With him trying to get out of Russia again, the story is told from all angles. Will he get away this time? Another page turner and a 5 out of 5. If you haven’t read all 3 books, I would recommend it.
Read more
Report abuse

Diane P.
5.0 out of 5 stars Brilliant
Reviewed in the United Kingdom on 14 March 2022
Verified Purchase
I love the story’s with Charles in them. They are fast and very exciting I read this book in a day and a half.
I do hope he writes more with this character in them and also he goes back to Russia as I find it fascinating.
Read more
One person found this helpful
Report abuse

Jaws.
5.0 out of 5 stars Wow, great read
Reviewed in the United Kingdom on 19 June 2022
Verified Purchase
What a great series. Unputdownable and full of anxiety that Jenkins could overcome the forces pitted against him by not only the Russian FSB but the Russian Mafia too, but having good friends in very strange places saves the day. Hope he stays at home now with his family so I can have an early night.
Read more
Report abuse

Joyce Smith
5.0 out of 5 stars A Fantastic Read!
Reviewed in the United Kingdom on 6 April 2022
Verified Purchase
An absolute thrilling read which kept me on the edge from the first page to the last!
Love Charles Jenkins as a character and he seems to have developed during the 3 books in the series!
An emotional read so tissues should be kept at hand! Another cracking read from Robert Dugoni
Read more
Report abuse

JJ
5.0 out of 5 stars Just as good as the other books in this series - did not disappoint!
Reviewed in the United Kingdom on 12 March 2022
Verified Purchase
I pre-ordered this book and totally forgot until it arrived in my kindle.
It’s as good a read as the other books I. This series and certainly didn’t disappoint! I do recommend it
Read more
One person found this helpful
Report abuse
See all reviews