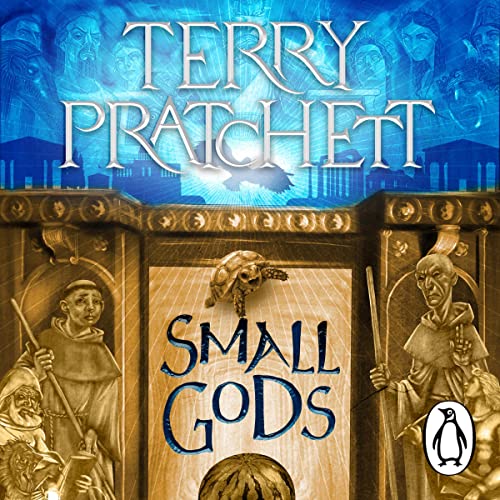 The audiobook of Small Gods is narrated by the BAFTA award-winning actor and director Andy Serkis (The Lord of the Rings; Planet of the Apes), BAFTA and Golden Globe award-winning actor Bill Nighy (Love Actually; Pirates of the Caribbean; Harry Potter and the Deathly Hallows) reads the footnotes, and Peter Serafinowicz (Star Wars: Episode I - The Phantom Menace; Shaun of the Dead) stars as the voice of Death. Featuring a new theme tune composed by James Hannigan.

'You should do things because they're right. Not because gods say so. They might say something different another time.'

Religion is a competitive business in the Discworld. Everyone has their own opinion and their own gods, of every shape and size - all fighting for faith, followers, and a place at the top.

So when the great god Om accidentally manifests himself as a lowly tortoise, stripped of all divine power, it's clear he's become less important than he realised.

In such instances, you need an acolyte, and fast. Enter Brutha, the Chosen One - or at least the only One available. He wants peace, justice and love - but that's hard to achieve in a world where religion means power, and corruption reigns supreme....

You can listen to the Discworld novels in any order, but Small Gods is a standalone.

The first book in the Discworld series – The Colour of Magic – was published in 1983. Some elements of the Discworld universe may reflect this.

Switch between reading the Kindle book & listening to the Audible narration with Whispersync for Voice.
Get the Audible audiobook for the reduced price of $14.49 after you buy the Kindle book.
Learn more about membership
By completing your purchase, you agree to Audible’s Conditions Of Use and Privacy Notice.
Sold and delivered by Audible, an Amazon company

4.7 out of 5 stars
4.7 out of 5
2,631 global ratings
How are ratings calculated?
To calculate the overall star rating and percentage breakdown by star, we don’t use a simple average. Instead, our system considers things like how recent a review is and if the reviewer bought the item on Amazon. It also analyses reviews to verify trustworthiness.

Ortrud
5.0 out of 5 stars Which is more important - the church or the deity?
Reviewed in Australia on 16 June 2018
Verified Purchase
Pratchett is always rewarding. This one is a brutal look at the less desirable aspects of organised religion...what happens when belief in the religious system becomes more important than belief in the deity? Belief in deities is not mocked; but career clerics, the political power of large religions, fossilization and over-analysis of sacred texts, and violent proselytism, are ruthlessly dissected.

It's denser and less free-flowing than his usual work, with a lot of side threads. You may need to read it twice to really get your head around it. If you're new to The Discworld, I'd recommend starting with a Three Witches or City Watch book to learn how the universe works before you tackle this.
Read more
2 people found this helpful
Helpful
Report abuse

Rinaldo
5.0 out of 5 stars A God and His Last Believer, The Clash of Faith and Reason
Reviewed in Australia on 25 June 2019
Verified Purchase
Small Gods is an excellent exploration about faith, reason, and truth. While the Abrahamic religion satire felt a bit outdated for me, I really enjoyed the excellent dynamics between a god and his last believer. Small Gods is not only a clever, quotable, and hilarious story, it is also a thoughtful discourse of kindness at the same time.
Read more
Helpful
Report abuse

Liv
5.0 out of 5 stars Sublime and Profound
Reviewed in Australia on 8 October 2017
Verified Purchase
If I only had one book to take should I be banished somewhere forever, it would be "Small Gods".
Underneath the wit and satire about religion and politics is the love for the human condition, with all its frailties and idiosyncrasies.
I have read this book about five times already and each time there is something different to be found, such is the richness of this book.
I give this five stars, but it really is in a class of its own.
Read more
One person found this helpful
Helpful
Report abuse

Senda
3.0 out of 5 stars It's ok
Reviewed in Australia on 4 July 2021
Verified Purchase
Happy I read it but not sure I'll re-read it. It's my first Discworld book and maybe I need more context.
Read more
Helpful
Report abuse

Randall Mathews
5.0 out of 5 stars Pratchett was awesome
Reviewed in Australia on 17 March 2017
Verified Purchase
If you only read one Pratchett, read this one first!

Luckily I started in 1990, and can read early ones again.
Read more
Helpful
Report abuse

Scott Vincent
5.0 out of 5 stars Small gods; Big hearts
Reviewed in Australia on 14 March 2017
This book did it all right. It built up to beautiful ending and in traditional Terry Pratchett fashion, was witty, clever and is a great addition to the amazing discworld series.
Read more
One person found this helpful
Helpful
Report abuse

Shaun
5.0 out of 5 stars Metaphoric and fundamentally awesome
Reviewed in Australia on 3 December 2017
A informative perspective on religion and a great dive into the lore of disc world. Some tongue in cheek names and some direct ripping from history makes for interesting comedy
Read more
Helpful
Report abuse
See all reviews

Kindle Customer
5.0 out of 5 stars Westminster today's Omnia
Reviewed in the United Kingdom on 20 December 2018
Verified Purchase
Viborn would be a prime mover in Brexit, the chaos, the destruction of society, the smiting of unbelievers in the increasingly fascist doctrines of Tory Iams and preachers. Sadly no Tory MP would ever read this book and understand their vision of the post Brexit UK is for a born again Omnia where fear deprivation and hatred of anything not English in origin is the norm.

Sadly there is never an eagle or a tortoise around when you need them.
Read more
16 people found this helpful
Report abuse

A. Weir
5.0 out of 5 stars Different, but still good
Reviewed in the United Kingdom on 3 March 2020
Verified Purchase
As others reviewers have mentioned, this is an unusual Pratchett book in that it's set (apparently) centuries prior to the other Discworld stories, and therefore doesn't feature any of the usual characters. Some reviewers didn't like this, and that's understandable: Pratchett's carefully-drawn characters are 90% of the appeal, and if you're like me you've bought his books just to find out what happens next to Rincewind, Sam Vimes, or Esme Weatherwax. Even so, I'd say this is a well-crafted story that doesn't deserve the markdowns that others have given it.

True, the villain is a rather generic Pratchett villain (if you've read several other books, you'll find him irritatingly familiar), but there is little else to find fault with. As with many of his stories, Pratchett manages to weave in some trenchant observations on human nature, and a bit of philosophy, without messing up the plot or finger-wagging. I really have only one criticism: torture, even in the hands of a black-comedy master, is never funny. Particularly when it references real-world historical events. The violence in other Pratchett books tends to be slapstick and cartoonish, but here it's a bit too close to the bone.
Read more
4 people found this helpful
Report abuse

David Barnett
5.0 out of 5 stars Small Gods Loom Large...
Reviewed in the United Kingdom on 23 September 2021
Verified Purchase
This was one of those Discworld books I was looking forward to, albeit with a degree of apprehension. This was commonly portrayed as the 'angry' Discworld book, the exception to the rule of gentle, affable wit that otherwise runs through the series

In truth, it has its moments of pointed social commentary, some perhaps more pointed than others. Overall though, and what really elevates this material is how well it sticks to the good-natured tone whilst exploring the sharp end of theocracy, dogma and absolute bloody-mindedness in the face of better alternatives.

Its an exploration of mindsets. In the belief of hierarchies over gods, the subjective nature of belief and the innate need to believe in something over nothing. It's hefty stuff but never reads like a thesis on theology, psychology or culture.

In short it's quite the piece of work and a definite high point of the series. Gods large and small may impose themselves upon it's events but as is usually the case with these books it's the fundamental humanity of it's characters that always shines through. A solid recommendation.
Read more
Report abuse

Phil Headford
4.0 out of 5 stars Is this the real life?
Reviewed in the United Kingdom on 14 December 2019
Verified Purchase
Imagine a country where Religion is part of the state, and vice versa. Where the Religion has gone slightly mad...
Oh? You can? Then this the book for you, especially if you are fond of tortoises. This is Terry Pratchett on a soapbox, so it has dark tinges, but is still full of fun. A young novice in the One True Religion (aren't they all?) is sent out with a nefarious mission to a heretic (aren't they all?) neighbouring country. His survival is uncertain. The main question, though, is whether the truth can survive. A masterpiece by Terry Pratchett (aren't they all?). Lettuces also figure largely. And exploding steam-boats.
Read more
2 people found this helpful
Report abuse

Rob Pearson
5.0 out of 5 stars New to me!
Reviewed in the United Kingdom on 14 January 2019
Verified Purchase
I can not believe that in all these years i hd not read this one!
Unless i have suffered turtle amnesia.
Not one of the best, but still a fantastic read.
This book perhaps more than many others has some real relevance in the real world. Especially in this day and age of religious extremism, be it Muslim or Christian - either way it is a delightful read for Atheists and pacifists.
Read more
5 people found this helpful
Report abuse
See all reviews