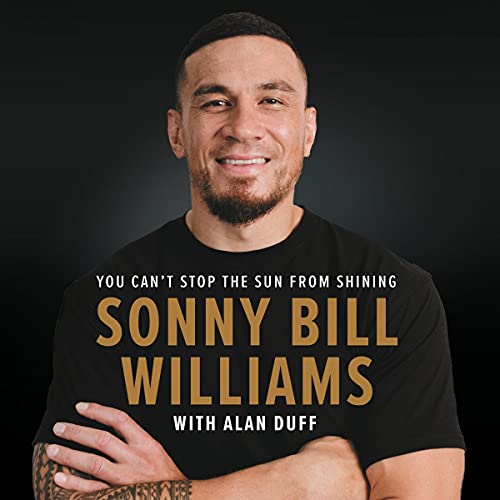 Sonny Bill Williams: You Can't Stop the Sun from Shining

Sonny Bill Williams (SBW) is a once-in-a-hundred-year athlete with immense sporting talent in rugby league, rugby union and boxing. Sonny Bill has built an incredible career and sporting reputation across the globe. His athleticism has taken him from inner-city Auckland, where he grew up, to the highest sporting moments in Twickenham, Eden Park and Sydney's Olympic Stadium. But there is so much more to Sonny Bill Williams' life and journey than his on-field and in-the-ring triumphs.

Sonny Bill's love of family, his faith, his skill and performance throughout his unparalleled sporting career, his ability to unite a team under pressure, his grace in owning his mistakes, the challenges of leaving home as a young man and dealing with a negative culture and the temptations that followed, and his courage in speaking out for the vulnerable and calling out injustice are all aspects of an inspiring life story.

Sonny Bill Williams was the first Muslim to play for the All Blacks. Driven by a fierce moral compass, Sonny Bill Williams thoughtfully and authentically uses his standing and platform as both a UNICEF ambassador and an elite sportsperson to speak out on political issues that confront the world today and to benefit those struggling in life. He is a dedicated family man, devoted to his faith, committed to his teammates, respectful of his fans and aware that the path he has taken can inspire and empower others. Working with Alan Duff, award-winning author of Once Were Warriors, this will be the must-have autobiography of the year.

Switch between reading the Kindle book & listening to the Audible narration with Whispersync for Voice.
Get the Audible audiobook for the reduced price of $5.99 after you buy the Kindle book.
Learn more about membership
By completing your purchase, you agree to Audible’s Conditions Of Use and Privacy Notice.
Sold and delivered by Audible, an Amazon company
Share

4.0 out of 5 stars
4 out of 5
34 global ratings
How are ratings calculated?
To calculate the overall star rating and percentage breakdown by star, we don’t use a simple average. Instead, our system considers things like how recent a review is and if the reviewer bought the item on Amazon. It also analyses reviews to verify trustworthiness.

Rob Grant
4.0 out of 5 stars Lifts the lid on one of professional sport's most eclectic careers.
Reviewed in Australia on 24 November 2021
Verified Purchase
The infamous SBW has had a storied past.

An accessible but powerfully written biography lifts the lid on some of SBW's biggest decisions and events of his career.

A man who is immensely driven and one his family can look at and be very proud of.

Ifraaz
5.0 out of 5 stars Awesome read
Reviewed in Australia on 1 November 2021
Verified Purchase
Loved the book good to see the uso rise against all odds from humble beginnings a motivational figure for many love ya work uce. I always believed if big Sammeh doesnt bump you off in your first game for the chooks you dont get that drive to give it that extra 200% and you finished on top at the end of that season was good to read that in the book as well
Keep grinding
Read more
Helpful
Report abuse

Vee
5.0 out of 5 stars Inspirational, Life changing, A Must have in every home
Reviewed in Australia on 16 November 2021
Verified Purchase
Wow! An inspirational read.
A must have for every home.
Mother's, Father's, Teachers, your teenager must read this book!
It should be on every book list for teenagers and young adults.
Love, love, love
Read more
Helpful
Report abuse

Aroha Rongo
5.0 out of 5 stars Great insight and read!
Reviewed in Australia on 17 November 2021
Verified Purchase
Really great to get an insight and new point of view to counter what has been splashed across the media.
Great read for young people to provide motivation and assurance that hard work pays off
Read more
Helpful
Report abuse

Leeanne C.
5.0 out of 5 stars SBW
Reviewed in Australia on 29 November 2021
Verified Purchase
The book looks fabulous however it is for a Christmas gift and I know my son in law will love it
Read more
Helpful
Report abuse
See all reviews
Back to top
Get to Know Us
Make Money with Us
Let Us Help You
And don't forget:
© 1996-2022, Amazon.com, Inc. or its affiliates