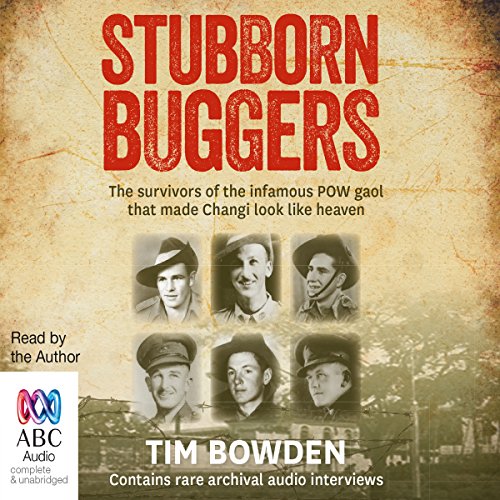 Stubborn Buggers: The Survivors of the Infamous POW Gaol That Made Changi Look Like Heaven

There was a place far worse than Changi - Singapore's Outram Road Gaol. Deprivation here was so extreme that there really was a fate worse than death. Stubborn Buggers is the story of 12 Australian POWs who fought and survived the battle for Malaya, then captivity and slave labour, followed by the unimaginable hardships of Outram Road Gaol.

It is a story of how they dealt with the brutality of the Japanese military police, the feared Kempeitai. And it is the story of how they found a way to go on living even when facing a future of no hope and slow death.

But Stubborn Buggers is about more than suffering and brutality. It is also a story of grit, determination, and larrikin humour. It is very much about the triumph of the human spirit.

Read more
©2014 Tim Bowden (P)2014 Bolinda Publishing Pty Ltd
Previous page
Next page
Learn more about membership
By completing your purchase, you agree to Audible’s Conditions Of Use and Privacy Notice.
Sold and delivered by Audible, an Amazon company

4.4 out of 5 stars
4.4 out of 5
19 global ratings
How are ratings calculated?
To calculate the overall star rating and percentage breakdown by star, we don’t use a simple average. Instead, our system considers things like how recent a review is and if the reviewer bought the item on Amazon. It also analyses reviews to verify trustworthiness.

Demonbazza
4.0 out of 5 stars Stubborn buggers by Tim Bowden
Reviewed in Australia on 9 July 2014
Verified Purchase
This book describes the atrocities that our POW'S were treated whilst in Outram goal in Singapore. The grit and determination of these men against their jailers makes them most admired. How frustating was it for them in the way they were treated by the animalistic guards, especially knowing the implications if they did rebel or retaliate against them. A worthy read and why more of these jailers were not tried and sentenced to either death or jail in incomprehensible. A great story written by Tim Bowden
Read more
Helpful
Report abuse

D. Newberry
3.0 out of 5 stars Disappointing read
Reviewed in Australia on 18 June 2014
Verified Purchase
Was a difficult and disjointed book to read as a book. As mini stories not so bad but nothing like the Railway Man book of the same time which was an excellent read
Read more
One person found this helpful
Helpful
Report abuse

Frank A Boorman
2.0 out of 5 stars Savage memories
Reviewed in the United States on 4 August 2014
Verified Purchase
Very slow. Very amateurish in the structure of the writing. Lots of repetition. Apart from these remarks, a savage memory of the reduction of humans in wartime. The Japanese soldiers and Korean guards allowed themselves to reduce to the lowest of all animals. We must never allow ourselves to go to war.
Read more
Report abuse

Jon Eaton
5.0 out of 5 stars Must Read
Reviewed in the United States on 31 May 2014
Verified Purchase
Every Australian should read this book to have some idea what these men have gone through, having visited Changi a number of times and observed the conditions, it is very sobering to understand what it was like in Outram Road, Changi was a holiday camp in comparison.
Read more
One person found this helpful
Report abuse

humbug
4.0 out of 5 stars made me cry
Reviewed in the United States on 24 May 2014
Verified Purchase
TIM BOWDEN IS A VERY CLEVER WRITER. THE WAY THIS STORY IS TOLD MAKES YOU KEEP READING HOPING THAT SOMETHING WILL HAPPEN TO STOP THE PAIN ,SADLY THE PAIN GETS WORSE ..A TRULY TERRIFIC PIECE OF WRITING
Read more
One person found this helpful
Report abuse
See all reviews