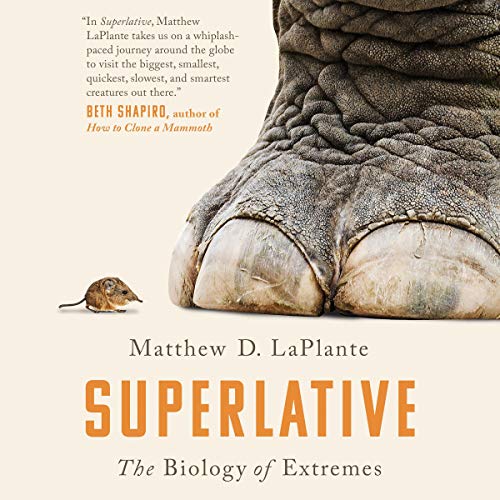 Superlative: The Biology of Extremes

The world's largest land mammal could help us end cancer. The fastest bird is showing us how to solve a century-old engineering mystery. The oldest tree is giving us insights into climate change. The loudest whale is offering clues about the impact of solar storms.

For a long time, scientists ignored superlative life forms as outliers. Increasingly, though, researchers are coming to see great value in studying plants and animals that exist on the outermost edges of the bell curve.

As it turns out, there’s a lot of value in paying close attention to the “oddballs” nature has to offer.

Go for a swim with a ghost shark, the slowest-evolving creature known to humankind, which is teaching us new ways to think about immunity. Get to know the axolotl, which has the longest-known genome and may hold the secret to cellular regeneration. Learn about Monorhaphis chuni, the oldest discovered animal, which is providing insights into the connection between our terrestrial and aquatic worlds.

Superlative is the story of extreme evolution, and what we can learn from it about ourselves, our planet, and the cosmos. It's a tale of crazy-fast cheetahs and super-strong beetles, of microbacteria and enormous plants, of whip-smart dolphins and killer snakes.

This book will inspire you to change the way you think about the world and your relationship to everything in it.

Read more
©2018 by Matthew D. LaPlante. (P)2019 Brilliance Publishing Inc., all rights reserved. Published by arrangement with BenBella Books.
Previous page
Next page
Final days - Don't miss out!
Learn more about membership
By completing your purchase, you agree to Audible’s Conditions Of Use and Privacy Notice.
Sold and delivered by Audible, an Amazon company

4.4 out of 5 stars
4.4 out of 5
49 global ratings
How are ratings calculated?
To calculate the overall star rating and percentage breakdown by star, we don’t use a simple average. Instead, our system considers things like how recent a review is and if the reviewer bought the item on Amazon. It also analyses reviews to verify trustworthiness.

Foggygirl
4.0 out of 5 stars Great read
Reviewed in Canada on 6 August 2019
Verified Purchase
A fascinating and informative read about a variety of “oddballs” that nature has, wether it is the slowest evolving creature the ghost shark or the axolotl “the Wolverine” of the natural world able to regenerate amputated limbs.
Read more
Report abuse

MDW
2.0 out of 5 stars Sophomoric Writing
Reviewed in the United States on 6 July 2019
Verified Purchase
I always consider the reviews prior to making a book purchase, and have changed my decision upon doing so. Assuming no stuffing of the ballot box is in play, I'm apparently the only one that found the writing to be so juvenile as to be irritating. The hyphenated-phrase-as-adjective technique is worn out from excessive use herein. Many word choices are beyond a casual style and are, well, juvenile.

The olfactory characteristics of the cheetah are discussed (circa pg 133). In reference there to, its "naval" capacity is mentioned. If not already frustrated with the writing, I would probably have found this gaffe to be humorous.

The science topics are interesting but poorly presented by the lousy writing of a journalism professor.
Read more
9 people found this helpful
Report abuse

Bama Fan
4.0 out of 5 stars Good book!
Reviewed in the United States on 26 October 2019
Verified Purchase
This book provides a lot of information that relate to a broad spectrum of random topics as they relate to the extremes of different living organisms. There is information about elephants, dolphins, cheetahs but also information about plants, insects and a lot of other things as well. Some of the info I was aware of, but there were quite a few tidbits that I've never hears. It is very wide in its coverage, but not very deep on any one topic, which provides an overview for a superlative amount of examples. I'd recommend for the lay person or someone with a general interest in science.
Read more
One person found this helpful
Report abuse

Wang
5.0 out of 5 stars BEST BOOK I have ever read
Reviewed in the United States on 2 June 2019
Verified Purchase
Find out why elephants have no cancer - and how research may apply to humans. Also, why we need to prevent extinctions and the losses of natural sources of information that may change our world or at least the way we look at it.
Read more
5 people found this helpful
Report abuse

Kindle Customer
5.0 out of 5 stars Science for the Science-Averse
Reviewed in the United States on 29 May 2019
Verified Purchase
I'm not really a biology person, save for the occasional trip to the zoo. But this book is somehow...more fun than the zoo? That seems weird to admit, but it's true. "Superlative" is a fascinating read, full of the coolest tidbits and conveyed in such a low-key manner that you feel like you're sitting across the table from the author, drinking coffee and having the world's most interesting chat. On more than one occasion, I've caught myself repeating something that I read in the book in the midst of a conversation - suddenly, I've become a biology person. Curse you, Matthew LaPlante (and thanks).
Read more
3 people found this helpful
Report abuse
See all reviews