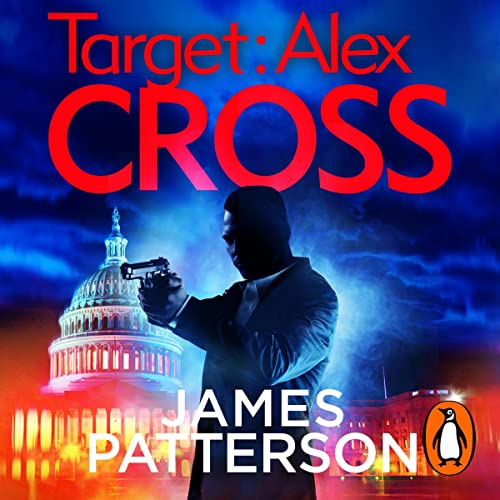 The 26th novel in the best-selling Alex Cross series.

Detective Alex Cross and his family join men and women from across the nation lining the streets of Washington DC to mourn the unexpected death of the President.

The assassination of a prominent Senator strikes another blow to the heart of the nation's capital. As Chief of Detectives, Bree Stone faces an ultimatum: solve the case or lose her job.

The new President calls on Alex to lead an FBI investigation to capture America's most wanted criminal. But as the country plunges into chaos, Alex is drawn into the most important case of his life.

Switch between reading the Kindle book & listening to the Audible narration with Whispersync for Voice.
Get the Audible audiobook for the reduced price of $30.38 after you buy the Kindle book.
Learn more about membership
By completing your purchase, you agree to Audible’s Conditions Of Use and Privacy Notice.
Sold and delivered by Audible, an Amazon company

4.6 out of 5 stars
4.6 out of 5
6,729 global ratings
How are ratings calculated?
To calculate the overall star rating and percentage breakdown by star, we don’t use a simple average. Instead, our system considers things like how recent a review is and if the reviewer bought the item on Amazon. It also analyses reviews to verify trustworthiness.

Wide Eyes, Big Ears!
TOP 500 REVIEWER
3.0 out of 5 stars Great action but way too over the top politically!
Reviewed in Australia on 25 November 2021
In a coordinated plot, key American political figures are removed by a phalanx of freelance assassins. Alex Cross is seconded by the FBI to track down the killers and culprits. There were lots of great sniper scenes and spy-vs-spy action mixed with covert disguises culminating in a radical change of leaders. Ultimately though, the plot was so huge and far-reaching that the denouement and explanations of motive didn’t live up to the hype - I was left wondering if any non-state actors would really go to so much trouble. Then there was the gag-worthy self-congratulations about how wonderful the American political system is, I got muscle strain from all the eye-rolling. In sum, this was too over the top. Great audio narration by Andre Blake.
Read more
Helpful
Report abuse

manny rothman
5.0 out of 5 stars Target Alex Cross (Alex Cross26)
Reviewed in Australia on 5 November 2021
Verified Purchase
Was a great book with great characters and great action with a great story but a strange ending
Looking forward to the next book 🤠🍷🇦🇺💪
Read more
Helpful
Report abuse
See all reviews

Amazon Customer
1.0 out of 5 stars Mistakes in Cross history presumably by main author
Reviewed in the United Kingdom on 24 November 2018
Verified Purchase
I’m only a few pages into this book and already bitterly disappointed. It’s going to be a good read, they all are, but when you’ve been following Alex Cross since the beginning it’s just insulting our intelligence to pretend Patterson took his time contributing to this one. There’s even a bio at the front to help the real author get Alex’s back story straight, and he still manages to get it wrong. When Maria was killed Cross was left with a son and baby daughter to raise, not just a baby boy. Is he confusing them with Ali? Very disappointed.
Read more
13 people found this helpful
Report abuse

Carol Bradford
4.0 out of 5 stars TARGET ALEX CROSS BY JAMES PATTERSON
Reviewed in the United Kingdom on 8 December 2020
Verified Purchase
This is the twenty sixth book in the Alex Cross Series of books. The plot for this book is a little far fetched but provides an interesting concept if it were to ever happen, if someone or a group of people decided to cause mayhem in the United States and upset the Constitution.

In this book Alex Cross is trying to find the people or persons responsible for the assignations of the president and other various people next in line to the presidency. Bree his wife is also doing the same. Why were these people killed? Whom By?

The plot its fast paced and has many twists and turns. Does Alex Cross help save the day? Does Bree keep her job?
Well you will just have to purchase the book, and sit and delve within its pages to find the answers. Read and enjoy.
Read more
Report abuse

mdf6701
4.0 out of 5 stars OMG, has my fave old nemesis returned...again??
Reviewed in the United Kingdom on 10 January 2019
Verified Purchase
I enjoyed the book guys. I'm glad Patterson has not given in to political correctness (as you'll see) #FatShaming...

Tense build up of murder and unabashed slaughter.
Missing Sampson's usual inclusion here and Ali was not put to as much use as he was in the last one where his brilliant prodigal theories broke the case wide open.

....Nina's hyper-sexed alter ego "Kaycee" and the final message written on the wall/mirror or something published by an "M"....in my opinion (or at least wouldn't it be utterly fantastic if) Kyle Craig/KC/Kaycee / M for Mastermind may have returned AGAIN.

I can't remember the specifics from when Kyle died but there was definately a gas canister explosion on an ambulance... did we get a description of what his body looked like? The mastermind had the dollars to pay off a corrupt coroner to fake his death, right?....I know, long shot. But I just love the thought
Read more
3 people found this helpful
Report abuse

Kittythehare
1.0 out of 5 stars Cross is what I am!!!
Reviewed in the United Kingdom on 31 January 2019
Verified Purchase
I have struggled beyond belief with this book for over three weeks. Picking it up and after an hour or so throwing it down in anger yet again because I have wasted another hour of my life on it. But no more! I have read 59% of it and have just deleted it from my Kindle. Absolutely woeful plot, too many beyond-the-realm of belief characters and, without doubt, James Patterson at his WORST. You have been warned! Save your money!
Read more
4 people found this helpful
Report abuse

J. A. Mcelroy
5.0 out of 5 stars Target..Alex Cross
Reviewed in the United Kingdom on 3 October 2019
Verified Purchase
I enjoyed this book, well written and flowed well. Qute far fetched but if you read it just as a story it is entertaining.
I like the Cross family with all of the characters you have known over the series, but miss his friend Sampson who was barely mentionedinthis book.
My only disappointment was that it finished so abruptly, has it beenleft open for a follow up? Not sure but it didn't seem to quite fit somehow. Never mind it was still a good read.
Read more
Report abuse
See all reviews