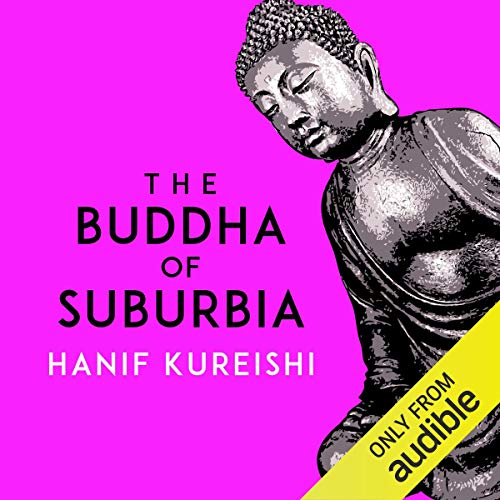 The Buddha of Suburbia

Christopher Simpson (Narrator), Hanif Kureishi (Author), Audible Studios (Publisher) & 0 more
4.4 out of 5 stars 727 ratings
See all formats and editions
Sorry, there was a problem loading this page. Try again.
The hero of Hanif Kureishi's debut novel is a dreamy teenager, desperate to escape suburban South London and experience the forbidden fruits which the 1970s seem to offer. When the unlikely opportunity of a life in the theatre announces itself, Karim starts to win the sort of attention he has been craving, albeit with some rude and raucous results.
Read more
©1990 Hanif Kureishi (P)2003 BBC Audiobooks Ltd
Previous page
Next page
Final days - Don't miss out!
Learn more about membership
By completing your purchase, you agree to Audible’s Conditions Of Use and Privacy Notice.
Sold and delivered by Audible, an Amazon company

4.4 out of 5 stars
4.4 out of 5
727 global ratings
How are ratings calculated?
To calculate the overall star rating and percentage breakdown by star, we don’t use a simple average. Instead, our system considers things like how recent a review is and if the reviewer bought the item on Amazon. It also analyses reviews to verify trustworthiness.

sss1389
5.0 out of 5 stars Witty refreshing read
Reviewed in Australia on 28 February 2017
Verified Purchase
Good read, will keep you grinning/sniggering throughout. If you are looking for a light read with a witty narrative, give this one a go. Hanif kureishi has a way of gripping your interest through his writing and will keep your head buried in his book. I look forward to reading more of his books in future.
Read more
One person found this helpful
Helpful
Report abuse

cristy c
4.0 out of 5 stars Funny
Reviewed in Australia on 7 May 2014
Verified Purchase
This book started out very funny, had me laughing out loud and continued that way until the middle part. Then it seemed to get bogged down with sex and stopped being about the Buddha of Suburbia and more about the writer. It picked up at the end again, but the middle part dragged on and I kept thinking I wish the author would get back on the subject.
Read more
One person found this helpful
Helpful
Report abuse

sally tarbox
4.0 out of 5 stars "I was looking for trouble, any kind of movement, action and sexual interest I could find"
Reviewed in Australia on 28 August 2017
An entertaining tale of a young mixed-race Londoner - father a Muslim Indian, mother English- growing up in the 1970s. When his father is taken up by the artistic Eva, and becomes something of a local celebrity with his yoga seminars, our hero, Karim, sees a new and exciting world opening up, even as he pities his mother, left behind. The whole feel of the era is well-drawn - the craze for the new and exotic, the sex, drugs and music, but also the racism and political discontent.
There are some great characters here: the strong-minded Jamila, long-suffering immigrant Changez, and many pretentious types whom Karim encounters through the theatre.
Enjoyable read.
Read more
Helpful
Report abuse
See all reviews

John Hopper
4.0 out of 5 stars well written, but a novel of two halves
Reviewed in the United Kingdom on 11 October 2020
Verified Purchase
This novel, published in 1990 but set in the 1970s, offers a view of life, love and growing up by Karim Amir, a mixed raced teenaged son of an Asian father and English mother living in Beckenham in the south east London suburbs (in the borough of Bromley, next door to my own borough of Bexley). Karim is a few years older than me, but I can identify with many of his (non-racial) cultural reference points as a fellow product of the 1970s suburbs. This is also of course, though, a novel about the naked racism faced by Asian and black people particularly severely at this time, when the National Front held frequent marches and in an era long before the Stephen Lawrence murder when the police frequently appeared to be, and no doubt in many cases actually were, indifferent to or even casually sceptical of the racist violence suffered by families like the Amirs: "The lives of Anwar and Jeeta and Jamila were pervaded by fear of violence. I'm sure it was something they thought about every day. Jeeta kept buckets of water around her bed in case the shop was firebombed in the night." This is not a heavy novel, though; Kureishi writes with a lightness of touch and a humour about the situations and the very rounded, realistic and believable characters. Their lives are complex - Karim's father leaves his mother and moves in with another white woman, Eva, while Karim's cousin Jamila is forced into marriage with a stranger from India after her father Anwar nearly kills himself on a hunger strike to bend her to his will. I found the first half of the novel in Beckenham very enjoyable, but when Karim grows up, moves to London and gets involved with the acting fraternity, my interest tended to wane; while still written very well, I didn't really care for any of these characters. Karim falls in and out of numerous sexual relationships with both women and men, but still feels somewhat of an outsider. After a brief sojourn with his acting circle in New York, he returns gratefully to London, where despite his problems, he feels much more at home. With its quintessential 70s setting in cultural and political terms, the novel ends with the watershed election of Margaret Thatcher's Conservative government in 1979. A very good read and a superb recreation of a time and place.
Read more
6 people found this helpful
Report abuse

Liam J Madden
4.0 out of 5 stars Shocking and Clearly Ahead of It's Time...
Reviewed in the United Kingdom on 16 October 2018
Verified Purchase
When 'The Buddha of Suburbia' was first released at the beginning of the nineties, it became popular almost immediately. I was working and living in London at the time and kept seeing it everywhere I went but never had the time to get it or read a copy. Having just gotten round nearly thirty years later to reading it, I am impressed and can only recommend it massively. It's enjoyable and kind of shocking in parts, but the writing is excellent as the story is begun through Karim's seventeen years-old perspective. The book evolves from the suburbs of Kent/South London and then progresses through to West Kensington, where I once lived. Hanif Kureishi is a brilliant writer and manages to give lovable descriptions of the various characters and relatives in Karim's life and shows them as inspiration for his life. It's a unique book and Hanif isn't afraid of using colourful language to get his story across to the reader. Essentially it's a really good book which does a lot of good to remind you that London is a unique part of the world and as Karim experiences the 'big smoke' it manages to convey just how broad-minded he is and also how positive he remains throughout the story. 'The Buddha of Suburbia' is worth a read and shows that after 30 years, it still has the impact of when it first came out in print.
Read more
2 people found this helpful
Report abuse

Sue Ellen
5.0 out of 5 stars A novel of it's time
Reviewed in the United Kingdom on 21 December 2019
Verified Purchase
I liked this book very much and, although it is 30 years since it was published, it hasn't lost it's edge.
It illustrates well the struggle to be a part of two cultures; easier for Kureishi who was born here
but first generation immigrants had a hard time adapting to what must have seemed to some of
them, an alien culture. It still resonates today.
Read more
3 people found this helpful
Report abuse

Mia
3.0 out of 5 stars Growing up in the 70s suburbs
Reviewed in the United Kingdom on 2 June 2020
Verified Purchase
London suburbs of the 70s , a wandering mindless but at times funny rambling tale of a lad growing up in suburbia
Please spend a moment hitting the like button and make my review worth writing 🥰
Read more
3 people found this helpful
Report abuse

Manto
5.0 out of 5 stars Anatomy of the Desi
Reviewed in the United Kingdom on 22 July 2013
Verified Purchase
What a story. Difficult to extricate if you are a desi in Inglistan. don't believe me? Check this out.
'In the suburbs people rarely dreamed of striking out for happiness. It was all familiarity and endurance: security and safety were the reward of dullness.' Huh, what do you think? Want more, here is a bit of a dialogue between an old immigrant (Anwer, owner of grocery store) and his freshly imported son in law (Changez) from India, specially brought in as extra help with the shop.
Anwer had reclaimed Changez and was patiently explaining to him about the shop, the wholesaler and financial situation. Changez stood there looking out of the window and scratching his arse, completely ignoring his father in law, who had no choice but to carry on with his explanation. As Anwer was talking Changez turned to him and said, 'I thought that it would much more freezing in England than this?'
Anwer was bewildered, irritated by his non sequitur.
'But I was speaking about the price of vegetables,' said Aner.
'What for?' asked Chagez in bewilderment. 'I am mailny a meat-eater.'

The book is filled with many tensions in the immigrant community of Asians in England. Between themselves, the Whites, and fresh arrivals like Changez.
Read more
3 people found this helpful
Report abuse
See all reviews