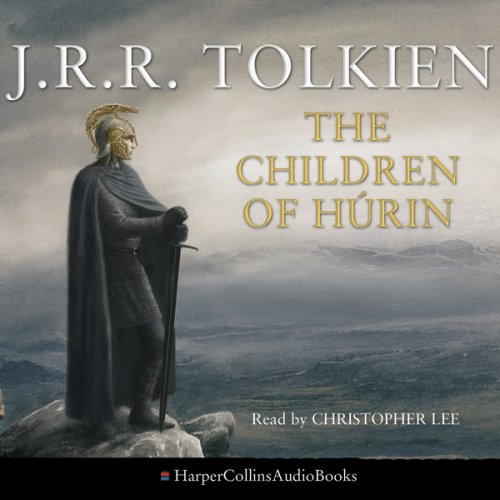 The Children of Hurin

4.6 out of 5 stars 2,459 ratings
See all formats and editions
Sorry, there was a problem loading this page. Try again.
Previous page
Next page

This title is not available for you.

Sorry, that title isn't available in your region. If you think this is a mistake, please call Audible Customer Care at 1800 736-910.

4.6 out of 5 stars
4.6 out of 5
2,459 global ratings
How are ratings calculated?
To calculate the overall star rating and percentage breakdown by star, we don’t use a simple average. Instead, our system considers things like how recent a review is and if the reviewer bought the item on Amazon. It also analyses reviews to verify trustworthiness.

AWM
5.0 out of 5 stars A delightfully surprising Anti-hero
Reviewed in Australia on 9 November 2020
Verified Purchase
Who knew that "The Children of Hurin" had reached such a complete stage? I read this book after completing the Silmarillion and wasn't expecting it to be the developed tale it actually is. Turin is certainly not the most likeable of heroes. His life is tragic in true shakespearean style. The flow of the book is somewhat episodic rather than having the clear destination like the Hobbit or LOTR. However it was very readable and exciting in parts. Understanding the havoc of Glaurung and the importance of Turin's slaying of him, makes total sense of why, in The Hobbit, Gandalf was so concerned that Smaug might be turned to the evil purposes of the necromancer (Sauron). Without this background meaning, the Hobbit is little more than a treasure-hunt.
Read more
One person found this helpful
Helpful
Report abuse

laef
5.0 out of 5 stars Loved it
Reviewed in Australia on 20 July 2020
Verified Purchase
Absolutely brilliant illustrations to go with a lovely addition to Tolkien's work
Read more
Helpful
Report abuse

Kindle Customer
5.0 out of 5 stars Good supplement.
Reviewed in Australia on 10 July 2019
Verified Purchase
If you love Middle Earth, then this book is a great supplementary piece. It's a bit full of names, with characters having multiple names... it can be a bit confusing, but you'll ease into it!
Read more
Helpful
Report abuse

Timothy Naduvilath
5.0 out of 5 stars An incredible book that blew me away
Reviewed in Australia on 21 May 2021
Verified Purchase
Very well written - the best first age novel from Tolkien
Read more
Helpful
Report abuse

E. A. Solinas
TOP 100 REVIEWER
5.0 out of 5 stars A darkness lies behind us, and out of it few tales have come
Reviewed in Australia on 15 January 2015
Just when you think they can't find another draft, note, poem or shopping list written by J.R.R. Tolkien, something new pops up.

But in the case of "The Children of Húrin," the result is a surprisingly solid and lucid story, full of familiar characters from other books about the history of Middle-Earth. Tolkien's timeless, formal prose and richly-imagined world make this novella pop from the pages, especially without his son's stuffier footnotes.

It opens with the story of Huon and Hurin, heroic brothers who lived back in the first age. But when battling the terrible Morgoth (the Middle-Earth Satan), Huor is slain and Hurin is taken prisoner by Morgoth, who torments and curses him. The Easterlings overrun his lands, and in fear for her son and unborn baby, Hurin's wife Morwen sends her son away to be fostered in Doriath.

And so Turin grows up in Doriath, until the day when he feels the need to go out and defend his distant family. His adventures take him through Middle-Earth, encountering great elves, orcs, lives with outlaws, and Mim the petty-dwarf. But his life is cursed by Morgoth -- as is the mysterious girl he falls in love with -- and his downfall will be one of horror and disgrace, even as he slays the most terrible dragon in Middle-Earth, Glaurung.

This book is actually a jigsaw puzzle -- Tolkien worked on the interrelated stories and poetry throughout his lifetime, but he never quite finished a solid cohesive story. So Christopher Tolkien cobbled together these various stories with Tolkien's unfinished works, pasted them together, and the result was "The Children of Húrin."

Surprisingly, the resulting story is very solid and strong, with a darker finale than "Lord of the Rings." While the main storyline is about Hurin and his son, it's sprinkled with familiar characters, such as Melian and Morgoth. And the rich, tragic storyline is full of noble elves, great human heroes, ancient lost cities and even a vengeful, talking sword.

And Tolkien's writing is somewhere between his "Silmarillion" style and his "Lord of the Rings" style -- it's formal and archaic, but he includes strong descriptions ("A flash of white swallowed in the dark chasm, a cry lost in the roaring of the river") and dialogue ("You are one of the fools that spring would not mourn if you perished in winter". One of the best scenes is when Morgoth and Hurin argue about theology and the "circles of the world" on a tower.

Despite the formality of his writing, the characters really pop out of their stories -- Turin is fierce, passionate and tragic, and his last scenes are absolutely stunning. His noble father and moody mother also come across well, and we get plenty of other colourful characters, from snitty elves to the evil Morgoth himself, who torments Hurin by forcing him to see everything Morgoth sees.

Since the actual story is only about two hundred pages long, it's fleshed out considerably by Christopher Tolkien's introduction and appendices, which explain about the writing and construction of the stories and poems, as well as a pronunciation guide, and a series of family trees.

And Alan Lee provides several beautiful drawings (both black-and-white and color), including Doriath's forests, eagles carrying Hurin and Huor, elven smiths, the dragon, Elf warriors, and finally the death of Turin, over a grey river under some burned trees.

Despite its brevity, "The Children of Húrin" is a stunning, brilliant piece of work, full of Tolkien's vibrant storytelling and memorable characters. Definitely a must-read.
Read more
3 people found this helpful
Helpful
Report abuse
See all reviews

The book is as excellent as I remember it being, and the full colour illustrations by Alan Lee are as extraordinary as ever. For any fan of Tolkien, be it from film or book, this is a must read.

I was disappointed to find out that between publishing this and Beren and Lúthien that the publisher had decided to change the finish of the dustjacket. I now have two lovely looking books on my shelf in a nice matte, textured finish with debossed, lettering and a white logo/text on the spine with this sat beside it in a horribly reflective gloss all over and mismatched lettering on the spine.
I am pleased that the latter two publications came in a much nicer dustjacket but am rather disappointed to find that The Children of Húrin was never updated to match - unless there is a copy out there somewhere which I have never found! If this does exist I will be sure to be replacing my copy (again).

Edit: I've now discovered that there is a new edition and have it on my shelf! Careful when ordering from Amazon if this does matter to you, as it seems to be pot luck as to which one you'll get.
Read more
11 people found this helpful
Report abuse

AnnSAmerica
5.0 out of 5 stars Great book
Reviewed in the United Kingdom on 29 October 2018
Verified Purchase
I battled through the Silmarillion as a teenager. I truly didn’t enjoy it because it was so different from the Hobbit and LotR. It’s only now do you really appreciate just how complex and beautiful the world Tolkien conceived actually was.

This is a great historical book set in the 1st Age of Middle Earth, before Sauron and his Rings, before Hobbits and Gandalf etc. It is a stand alone story, but it fills in historical gaps that are aluded to in the LotR.
Read more
10 people found this helpful
Report abuse

A. Gibb
3.0 out of 5 stars Archaic Text
Reviewed in the United Kingdom on 27 December 2020
Verified Purchase
Written in an archaic text style that takes a little time to get into the rhythm of. The CoH is a tale from the 1st age of Middle Earth, and so is set thousands of years before TLORs; the style of the text reflects this, almost biblical.

As a narrative it’s a sweeping tragedy, spanning a full (human) lifetime of the cursed Turin. Place names and peoples take some understanding, and without being a Tolkien scholar you either have the choice of constant references to the maps and appendices or just going with it and hoping that you catch the drift. Either way it’s still a well constructed tale, albeit one pieced together from notes and partially finished works by the original authors grandson. Taking a step back from this and judging the book as a stand-alone piece of fiction, it’s certainly engaging and like many a piece of tragedy a bit like watching a car crash in slow motion.
Read more
One person found this helpful
Report abuse

Malkirn
5.0 out of 5 stars An amazing journey
Reviewed in the United Kingdom on 6 November 2021
Verified Purchase
It may cover material/storyline points that were already written in the Silmarillion, but as someone who has read both versions many, many times, the Children of Húrin book is so, so much more than a restatement. It’s easier to read than the Silmarillion, despite the fact that it still has quite a bit of geography and genealogy, and it moves me so deeply that every time I read it I have to stop in the middle, put the book down, and cry on the living room floor. If you like to suffer in a good way, read this book— I can’t recommend it enough
Read more
One person found this helpful
Report abuse

Grumpy Historian
5.0 out of 5 stars Tolkien's great tragedy repackaged
Reviewed in the United Kingdom on 27 April 2022
Verified Purchase
The Children of Hurin was Tolkien's attempt to write a tragedy. A version of it was contained in The Silmarillion, but Christopher Tolkien compiled and edited every version and revision of the story, and published it as a standalone novel.
This is that book. An essential addition to any Tolkien lover's bookshelf. One of the great stories of the First Age.
Read more
One person found this helpful
Report abuse
See all reviews