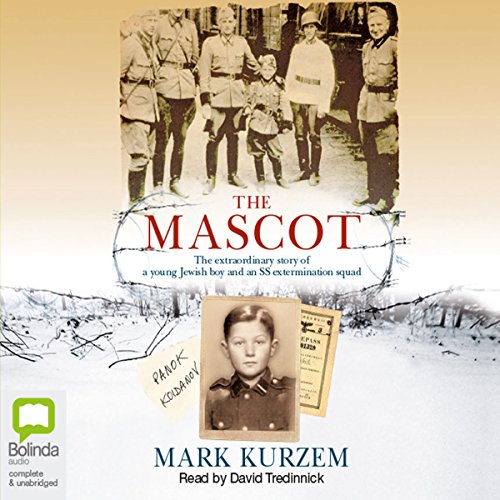 Mark Kurzem (Author), David Tredinnick (Narrator), Bolinda Publishing Pty Ltd (Publisher) & 0 more
4.7 out of 5 stars 13 ratings
See all formats and editions
Sorry, there was a problem loading this page. Try again.
One of the most astonishing stories to emerge from World War II.

One man's struggle with memory and prejudice on the way to recovering his past.

Mark Kurzem was happily ensconced in his academic life at Oxford when his father, Alex, showed up on his doorstep with a terrible secret to tell. As a five-year-old during the Second World War, Alex Kurzem had watched from a tree as the entire Jewish population of his village, including his family, were murdered by a German-led execution squad. He scavenged in the forests of Russia for several months before falling into the hands of a Latvian police brigade that later became an SS company. After one soldier discovered this young boy was actually Jewish, Alex was made to promise never to reveal his true identity - to forget his old life, his family, and even his name. The young boy became the company's mascot and part of the Nazi propaganda machine responsible for killing his own people.

Fearful of being discovered - as either a Jew or a Nazi- Alex kept the secret of his childhood from even his loving wife and children. But he grew increasingly tormented and became determined to uncover his Jewish roots and the story of his past. Shunned by a local Holocaust organization, he reached out to his son Mark for help in reclaiming his identity.

The Mascot is a survival story, a grim fairy-tale, and a psychological drama. It's a remarkable and highly readable memoir that asks provocative questions about identity, complicity, and forgiveness.

4.7 out of 5 stars
4.7 out of 5
13 global ratings
How are ratings calculated?
To calculate the overall star rating and percentage breakdown by star, we don’t use a simple average. Instead, our system considers things like how recent a review is and if the reviewer bought the item on Amazon. It also analyses reviews to verify trustworthiness.

Reader down under
5.0 out of 5 stars A fascinating and moving read
Reviewed in Australia on 17 April 2021
Verified Purchase
I discovered this book by chance, even though both its main character and its author made headlines in early 2000s. As others have said, "The Mascot" is both a gripping lesson into the dark history of the second world war in Eastern Europe, and a moving psychological profile of a child victim of that war, and his relationship with his family/families. I say "victim" even though I am now aware of the controversy surrounding the real history of Alex Kurzems (look it up in Wikipedia). Nevertheless, I do think that Alex was a victim, whichever way you look at it. If the story as painted in the book is accurate, then this young Jewish boy was touched by the Holocaust in the worst way imaginable. His family was murdered, and he was later made to join the side of the executioners in order to survive. If, as some critics have apparently argued, he was not who he says he was, he still remains a victim in my mind. Even if we assume that he had no other reason to "adopt into" Nazi forces than self-interest and self-preservation, who can blame a child of five for yearning for safety and mentorship? No child should be made to EITHER witness the killing of his family OR to seek protection from foreign armed forces committing atrocities by joining them. Either way, he could only lose his innocence and peace of mind. Years later in Australia, the nightmares are still with him. His son did a very commendable job to try to get to the bottom of things, at some cost to him and also his father. Whether one or both were self-deluding, I cannot know for sure. All I can say is that, if this story did not happen to Alex Kurzems, it must have happened to somebody else, somewhere, some time. There were millions of displaced persons, many of them children, during WWII.

Andy
5.0 out of 5 stars A truly amazing true story, very well told
Reviewed in the United Kingdom on 24 November 2007
Verified Purchase
Amazing book! Gripped me from start to finish. On the one hand a fascinating and harrowing account of the atrocities that went on eastern Europe in the early 1940s. On another level, a highly intelligent psychological insight into a man who has lived a whole lifetime fighting the demons of his childhood, and the pain of the struggle to come to terms with these memories. This tells the story of one of the less obvious, yet most tragic victims of the war. Well worth a read. The personal expressions of emotion by the author enhance the power of the narrative.
Read more
5 people found this helpful
Report abuse

Derek smith
4.0 out of 5 stars What a burdeon this person carried all those years. A sad tale.
Reviewed in the United States on 1 January 2014
Verified Purchase
I thoroughly enjoyed this book and felt great sorrow for the Mascot's situation. He knew no better and people exploited him, yet there was kindness also shown despite the evil behind his captors. It shows there is always another side to human nature despite what impressions are left with us.
Read more
Report abuse

Fit_Mum
5.0 out of 5 stars Enjoyed
Reviewed in the United States on 9 May 2014
Verified Purchase
Thoroughly enjoyed this book...very intriguing & captivating. Would recommend this book as worth the read, whether real or not it was well written.
Read more
Report abuse
See all reviews