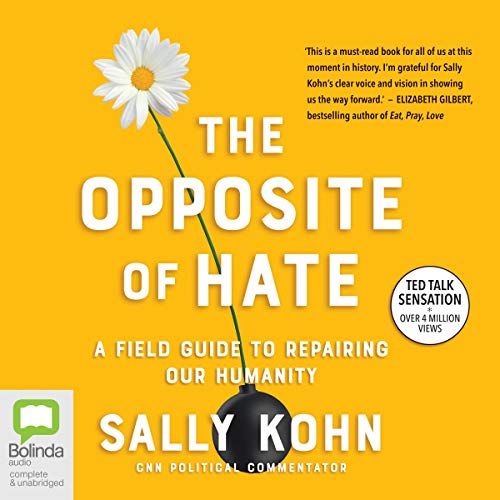 The Opposite of Hate

Sally Kohn's engaging, fascinating, and often funny book will open your eyes and your heart.

What is the opposite of hate?

As a progressive commentator on Fox News and now CNN, Sally Kohn has made a career out of bridging intractable political differences and learning how to talk respectfully with people whose views she disagrees with passionately. Her viral TED Talk on the need to practice emotional - rather than political - correctness sparked a new way of considering how often we amplify our differences and diminish our connections.

But these days even famously 'nice' Kohn finds herself wanting to breathe fire at her enemies. It was time, she decided, to look into the epidemic of hate all around us and learn how we can stop it. In The Opposite of Hate, Kohn talks to leading scientists and researchers and investigates the evolutionary and cultural roots of hate and how incivility can be a gateway to much worse. She travels to Rwanda and the Middle East and across the United States, introducing us to former terrorists and white supremacists and even some of her own Twitter trolls, drawing surprising lessons from dramatic and inspiring stories of those who left hate behind.

Read more
©2018 Sally Kohn (P)2018 HighBridge, a division of Recorded Books
Previous page
Next page
Learn more about membership
By completing your purchase, you agree to Audible’s Conditions Of Use and Privacy Notice.
Sold and delivered by Audible, an Amazon company

4.5 out of 5 stars
4.5 out of 5
148 global ratings
How are ratings calculated?
To calculate the overall star rating and percentage breakdown by star, we don’t use a simple average. Instead, our system considers things like how recent a review is and if the reviewer bought the item on Amazon. It also analyses reviews to verify trustworthiness.

Kelly A19
5.0 out of 5 stars Essential reading
Reviewed in the United Kingdom on 20 February 2019
Verified Purchase
I'm loving the reviews from those who've clearly not got the message of the book - they're brilliantly proving the author's point and don't even know it.
This book should be a must-read in all schools: maybe that would help the next generation be less hateful than some of the middle-aged monsters currently creeping around social media.
Kohn writes on a subject that could be very dry and academic, but she has deftly crafted prose that is easily-read, humorous in parts, painful at times, but always honest and fair.
She supplies some answers, many of which we could all adapt easily into our lives.
Her essential message is very simple - hate is not the answer to hate. Whether that be Kohn replying angrily to her many trolls, or extremists screaming hate at all Muslims because of the acts of a few extremist terrorists. Or any one of us responding to Trump's 'basket of deplorables'...
It's all summed up in my favourite quote: Be the change you want to see in this world.
If you want the world to be hateful, continue spouting hate. If you want a more peaceable world, find connections. Kohn will teach you how.
One word of warning - the chapter on Rwanda is effective, important, but extremely moving. In parts, some descriptions of the hateful acts perpetrated are unbearable to read. It's maybe only two paragraphs of the whole book, but they hurt and they stay with you. Be cautious in reading this chapter if you yourself have suffered from any violent trauma.
Read more
3 people found this helpful
Report abuse

Amazon Customer
4.0 out of 5 stars A good read!
Reviewed in the United Kingdom on 6 December 2019
Verified Purchase
This was a good book. Covered different areas and topics that I think many people would find interesting. I’d give 5, but the author included a chapter on internet trolling which felt like a personal rant. Womp waaa. I’d reccomend just skipping that chapter and it should be enjoyable!
Read more
One person found this helpful
Report abuse

Chad
5.0 out of 5 stars This conservative loved it!
Reviewed in the United States on 24 April 2018
Verified Purchase
I am a political conservative writer and have followed Sally for a long time. Although I have spent most of that time strongly opposing her worldview, I have found her to be an insightful and kind individual open to discussion. That is rare in political discourse and should be welcomed and valued.

This book is an excellent expression of that characteristic. Sally has a talent for bringing emotion to her stories and connecting them to her point of view and her argument. She presented a way of looking at the world I found myself considering in more depth than I normally would. Her story of a Palestinian man who lost his daughter to meaningless violence was moving and challenging. She makes black and white topics far less clear-cut and I appreciate that.

Although her ideas depend on an understanding and acceptance of specific progressive ideas on the nature of humanity and the consequences of history, a conservative reader is given unique access into how progressives view things without the voice being combative or lecturing. I do not agree with the foundation of her reasoning, but I recognize what she is telling me is true. It is a unique experience.

Sally tries valiantly to incorporate a diverse set of examples spanning the range of political ideologies in order to provide a balanced view. Although I think there could have been more room for internal-house cleaning within the modern progressive movement, I appreciate her efforts nevertheless. I do not feel she attacks the Right as much as she tried her best to understand us.

This book is worth a read. Even if you do not agree with her at all on anything you will appreciate her insight and her personal stories. In terms of attempting to bridge the gap between political ideologies, I think this is an excellent attempt. In a rare case, both sides can benefit from this book I think. I appreciate her writing this and I hope it inspires more discussion and interaction.
Read more
98 people found this helpful
Report abuse

Andrew
5.0 out of 5 stars A wise read for people who want to build bridges, not walls
Reviewed in the United States on 5 May 2018
Verified Purchase
This book made me realize that our political divide isn’t what’s tearing us apart so much as our metastasizing personal dislike toward people who don’t agree with our views. This book has led me to resolve to be more compassionate and understanding toward my fellow citizens and to seek to understand, rather than to judge, vilify, or belittle.
Read more
39 people found this helpful
Report abuse

Jay Gilbertson
4.0 out of 5 stars Very Important Read! Great for Teachers Too!
Reviewed in the United States on 6 June 2018
Verified Purchase
The Opposite of Hate
A Field Guide to Repairing Our Humanity
By Sally Kohn

We all hate. All of us. That means me, and unfortunately it also includes you. We are not born to do this; to judge and then hate others. We are taught to hate by the world around us. And by the way, hate is a four-letter word, worlds away from another four-letter word: love.
Author Kohn first came to my attention when her Ted Talk landed in my in-box. If you’re not familiar with Ted Talks, you should be. Hate has always been a fascination to me, how bullies can develop from even the nicest seeming individuals and what is the motivating factor that allows us to hate others? How this powerful emotion can blind us into choosing sides and spewing hate.
It has to stop.
“In different ways and to different degrees, consciously or unconsciously, all of us, in one way or another, sometimes treat other individuals and entire groups of human beings as though they are fundamentally less deserving than we are.”
Though I do feel Kohn went slightly off the rails sharing examples in the book and over-explained several scientific research projects on the subject, her message is none-the-less important and very timely. I should caution you, as in the following quote, Kohn can be very harsh in her observations of our country’s past, but don’t let that stop you from hearing her larger message.
“The United States was founded on hate—the hatred that justified colonial annihilation of American Indians and that perpetuated the enslavement of Africans. Hate divided the country during the Civil War and, a century later, spawned protest movements and backlash movements, with activists vying over issues of justice and human rights. And Americans are not alone in this legacy…”
To understand how society can justify hate is not that difficult. If you don’t have the capacity to imagine yourself as black, Muslim, gay or anything you are not, you can justify hate. Everyone has done this to some degree. We all think we have it worse, which gives us permission to marginalize others by bullying, disregarding completely or simply not seeing our similarities. You name it, we find a reason and then we slather on the hate. The solution to changing this behavior of us vs. them is pretty simple. It’s there in front of you and it’s up to each and every one of us.
“We need to meet the people we hate and learn their stories, which means supporting institutions and policies that foster connection-spaces, and also creating our own. Getting outside ourselves, breaking through the physical and mental walls of our own narratives and viewpoints.”
The bottom line; it’s nearly impossible to hate anyone up close, in person, face-to-face.
“What I’ve learned is that all hate is premised on a mind-set of otherizing. The sanctimonious pedestal of superiority on which we all put ourselves while we systematically dehumanize others is the essential root of hate. In big and small ways, consciously and unconsciously, we constantly filter the world around us through the lens of our explicit and implicit biases. This abets rationalization and looking the other way about widespread injustices, such as dismissing entire communities that don’t have access to health care, of entire nations locked in civil war because they fall outside the sphere of our moral concern.”
There is a crisis of hate surging through the US and the world and we need to see it. Leo Tolstoy wrote, “Everyone thinks of changing the world, but no one thinks of changing himself.”
Consider this. You don’t have to agree with everyone, or give up your particular beliefs or views, you don’t even have to like everyone. Actually, the opposite of hate is so much easier to do and be and teach and experience and share. We really only have to keep this one thing in mind; we are all basically connected and equal as human beings.
The opposite of hate is—connection.
Read more
13 people found this helpful
Report abuse
See all reviews