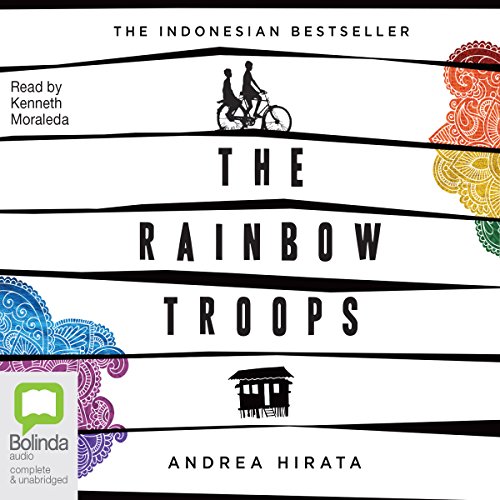 Ikal is a student at Muhammadiyah Elementary, on the Indonesian island of Belitong, where graduating from sixth grade is considered a major achievement. His school is under constant threat of closure. In fact, Ikal and his friends - a group called The Rainbow Troops - face threats from every angle: pessimistic, corrupt government officials; greedy corporations hardly distinguishable from the colonialism they've replaced; deepening poverty and crumbling infrastructure; and their own faltering self-confidence. But in the form of two extraordinary teachers, they also have hope, and Ikal's education is an uplifting one, in and out of the classroom. You will cheer for Ikal and his friends as they defy the town's powerful tin miners. Meet his first love - a hand with half-moon fingernails that passes him the chalk his teacher sent him to buy. You will roar in support of Lintang, the class's barefoot maths genius, as he bests the rich company children in an academic challenge. First published in Indonesia, The Rainbow Troops went on to sell over 5 million copies. Now it is set to captivate listeners across the globe. This is classic storytelling: an engrossing depiction of a world not often encountered, bursting with charm and verve.

Switch between reading the Kindle book & listening to the Audible narration with Whispersync for Voice.
Get the Audible audiobook for the reduced price of $3.99 after you buy the Kindle book.
Final days - Don't miss out!
Learn more about membership
By completing your purchase, you agree to Audible’s Conditions Of Use and Privacy Notice.
Sold and delivered by Audible, an Amazon company

4.5 out of 5 stars
4.5 out of 5
87 global ratings
How are ratings calculated?
To calculate the overall star rating and percentage breakdown by star, we don’t use a simple average. Instead, our system considers things like how recent a review is and if the reviewer bought the item on Amazon. It also analyses reviews to verify trustworthiness.

Joanna Berlinska
5.0 out of 5 stars A compelling, uplifting story of resilience, perseverence and hope just as life writes it
Reviewed in the United Kingdom on 14 July 2014
Verified Purchase
Do read it! It is a wonderful tale of perseverance, resilience, commitment, faith and hope, that helps you reset the principles of life. This autobiographical story is set in Belitong, one of the Indonesia's islands, rich in tin that's exploited by the Indonesian government. But the profits are whisked away from the Belitong people, offering them in exchange poverty as well as social and political indifference. Two local teachers, wonderfully committed, full of ideals and strong in their believes, strive to change the fate, the doom, of 11 children, teaching them to aspire and to dream. And they do, despite all that fate brings on them and it brings a lot; the poor schooling conditions, harsh life, constant threats from the authorities to close the school down, evergreen lack of whatsoever finance and belittling by the community. This book reminds you that nothing is by default impossible for he who wants; the example of a little boy cycling 40km one way each day to come to school should be told to every modern-world kid!

The book is structured in little stories that together tell this big compelling story. The characters are vivid and convincing, simply true. Some are presented with more detail than others but altogether they form the strong group bound by friendship and sharing ideals, the rainbow troops. The ambiance of the book, set in an exotic location and cultural set-up, just adds to it all.

Maybe in places it lacks a bit on the story line and credibility, but that's a minor detail, not weighing at all on the book's value. It's strength lays predominantly in the powerful messages it transpires. And there are many of them too?! Take this one with you: 'I have seen it everywhere: the most unfortunate in this world are the pessimistic'.
Read more
2 people found this helpful
Report abuse

Parvati P.
4.0 out of 5 stars An important reminder of the struggle for education
Reviewed in the United Kingdom on 21 July 2013
Verified Purchase
At first I wondered why this book is considered such a modern classic in Indonesia, where it is set. It seemed a fairly straightforward narrative about a village school endearingly and amusingly told through the eyes of one of its pupils. But this deceptively simple narrative is a slow burn. You are introduced to the pupils at the village school one by one, drawn into their stories and struggles, and suddenly without realising you are completely hooked. I cheered at their hard won victories, however small; I wept - I cannot remember the last time I did so over a book - when the obstacles to getting an education (mainly poverty) simply become too great to carry on; and I was batting all along for the hardworking, inspirational teachers who support the students through the most trying of circumstances, believing in them completely.
This story could be one of children anywhere - substitute the Indonesians on their island for South Africans in Soweto, Indians in rural areas, Indios in the Andes - its strength is in its universality. The struggle for an education for the poorest plays out everywhere, often under our very noses, without us thinking about it. This book reminds us of what should be a basic right for all children - to go to school and realise their potential. Those of us in the west, busy with our own rat race, would do well to stop a while and ponder why some people cannot get even a basic education.
My only concern is that the translation into English is not as good as it could be. For that reason alone four starts instead of five.
Read more
One person found this helpful
Report abuse

J. W. Platt
5.0 out of 5 stars Inspirational
Reviewed in the United Kingdom on 22 May 2013
Verified Purchase
This is a most excellent and inspirational story, that anyone who attended a rural school in a poor community will be able to relate to. It tells of the gems that exist in the rough, the quest for education, and the untold value of dedication by teachers and pupils alike. There re heartwarming episodes and a fund of anecdotes with a cast of characters that it is impossible not to admire in their struggle against the odds and the butdens imposed on them by the more privileged. I think this would make a very fine set book for GCSE "O" Level.
Read more
Report abuse

bakerman
5.0 out of 5 stars Modern Indonesia classic
Reviewed in the United Kingdom on 6 July 2013
Verified Purchase
A wonderful story about a small school for young Indonesians living on an island dominated by a foreign mining company. Their heroic teachers and a class of great children overcome all obstacles in their path to gain a valuable education. Funny, weepy, exciting by turns! A really enjoyable read.
Read more
Report abuse