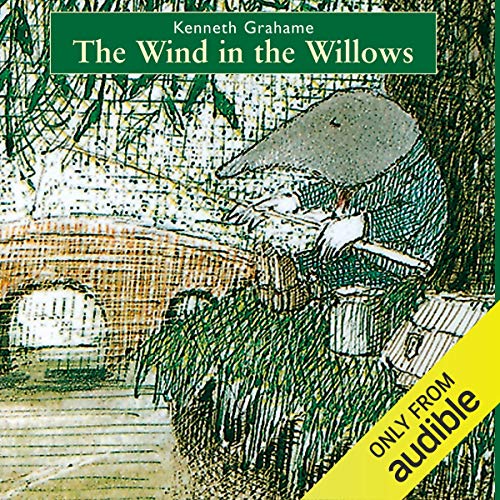 The Wind in the Willows

Kenneth Grahame (Author), Michael Hordern (Narrator), Audible Studios (Publisher) & 0 more
4.6 out of 5 stars 5,673 ratings
See all formats and editions
Sorry, there was a problem loading this page. Try again.
Here is a timeless tale of waterside Britain that has been loved by generations of children and acclaimed as a classic. The story of Mole, Ratty, Badger, and Toad, and their escapades, whether messing about on the river or poop-pooping in Toad's shiny new car, cannot fail to enchant.
Read more
©2007 Kenneth Grahame (P)2014 Audible, Inc.
Previous page
Next page

4.6 out of 5 stars
4.6 out of 5
5,673 global ratings
How are ratings calculated?
To calculate the overall star rating and percentage breakdown by star, we don’t use a simple average. Instead, our system considers things like how recent a review is and if the reviewer bought the item on Amazon. It also analyses reviews to verify trustworthiness.

Jeremy David Tatchell
5.0 out of 5 stars A childhood memory
Reviewed in Australia on 3 December 2018
Verified Purchase
This book is like an old friend, fun to be around and great to get together with! My parents were great storytellers and when we were kids, every night before bed either Mum or Dad would read read one chapter of a book to us - TWITW was one of my all time favourites and I have passed my paper book version to my daughter to read to her daughter. This book never loses its magic to transport the listener to another time and place and catch up with old friends like Ratty, Mole, Badger and of course the unforgettable Mr Toad!!
Read more
3 people found this helpful
Helpful
Report abuse

Magnesium Oil Australia
5.0 out of 5 stars One of the most wholesome books ever written
Reviewed in Australia on 20 October 2017
Verified Purchase
Over a century later, and it's still great. Any age can pick this up or have it read to them. A light and poignant look at friendships and human values. It also delves into the (almost) mystical with this edition including the often excluded chapter "The piper at the gates of dawn".

From the feverishly poetic longings of Ratty, the introspective Mole, the conceited pomp of Toad or antisocial Badger with a heart of gold; this story can also serve as a study in the human condition, but largely deals with what it means to have adventure and friends to share them with.
Read more
4 people found this helpful
Helpful
Report abuse

Amazon Customer Yvonne Scott
5.0 out of 5 stars Once again a trip down memory lane. Kenneth Grahame ...
Reviewed in Australia on 24 January 2015
Verified Purchase
Once again a trip down memory lane. Kenneth Grahame paints pictures with his words. Toady and ratty and their friends have mad cap adventures, mostly instigated by Toad who resides in Toad Hall while Ratty lives in his home in the river bank. Toad and Ratty with their friends get up to all sorts of mischief but Toad the leader of their merry frolics only manages to avoid being imprisoned by Ratty and co who go along to keep Toad out of trouble. Full of near escapes, and lots of mischief. Enjoyable from the beginning to the end. The characters may be animals, but adults should read it as well as children. A book for everyone.
Read more
One person found this helpful
Helpful
Report abuse

Paul Bennett
5.0 out of 5 stars Every Grandfather has to read this to his grandchildren
Reviewed in Australia on 22 August 2018
Verified Purchase
I remember as a child being enchanted by this story and the poetic telling and value character development that has stayed with me over the years. I wanted to pass this onto my grandchildren. The hidden strength of Mole, the soundness of Ratty, the leadership and strength of Badger, the consequences of being a follower of fashion and fun like Toad, the perfidy of the weasels and the denizens of the Wild Wood. So formative and fun filled for children and adult alike.
Read properly to or by your grandchildren this saga will stay with them for life.
Read more
One person found this helpful
Helpful
Report abuse

Nz
4.0 out of 5 stars Beautiful product
Reviewed in Australia on 14 July 2020
Verified Purchase
Beautiful book. Not sure if it was meant to come with a dust jacket or not, but it is fine. Efficient seller, product arrived in good condition and fast.
Read more
Helpful
Report abuse

JF
1.0 out of 5 stars Beware! Not all versions are the same.
Reviewed in the United Kingdom on 1 April 2020
Verified Purchase
Amazon appears to have amalgamated the reviews for all versions of Kenneth Grahame's book. This particular version, identifiable by a green band at the top and bottom of the cover picture and the date of 14th March for its addition to Amazon, is very poor. It appears to have been auto translated from a foreign language. The opening sentence is 'The Mole were running very hard all the morning, spring cleaning his little domestic.' It continues in like manner with grammatical errors and numerous changes to Grahame's original text.
Disappointing that Amazon has put something like this up without checking it.
Read more
58 people found this helpful
Report abuse

Will Hopkins
1.0 out of 5 stars This particular Kindle edition is unreadable.
Reviewed in the United Kingdom on 9 January 2021
Verified Purchase
I love the wind in the willows. It is a timeless classic.
Amazon I think after aggregating reviews of all editions, so be careful not too download this copy (picture attached), as it's a terrible edition. It reads as though it's been out through a translation program and I couldn't read beyond there first three pages before having to request a refund and purchase a better copy.
Please do read it, but shots this edition at all costs!
Read more

1.0 out of 5 stars This particular Kindle edition is unreadable.
Reviewed in the United Kingdom on 9 January 2021
I love the wind in the willows. It is a timeless classic.
Amazon I think after aggregating reviews of all editions, so be careful not too download this copy (picture attached), as it's a terrible edition. It reads as though it's been out through a translation program and I couldn't read beyond there first three pages before having to request a refund and purchase a better copy.
Please do read it, but shots this edition at all costs!

Images in this review

M. Dowden
5.0 out of 5 stars A Personal Favourite
Reviewed in the United Kingdom on 2 September 2016
Verified Purchase
This book is a personal favourite of mine, and one that I never get tired of reading, and I know that I am not the only adult that has read it many times, and will continue to do so. Great for children as well this is something that you can read to them in instalments, and when they are old enough, they can then read themselves.

Published over a hundred years ago, rather like JK Rowling and her Harry Potter books this was turned down by a number of publishers, and when it was eventually published received some quite snooty reviews from critics. However despite this this was a hit with the public, and has remained so, and it is easy to see why.

This isn’t perfect by any means and reading it you do soon realise that the animal characters change size on a number of occasions, from their normal animal size, to being larger and coming into contact with humans. They even have money, after all Mr Toad can buy anything he seemingly wants and lives in a hall.

As Mole leaves his home for a look outside on a glorious spring morning so he comes into contact with Ratty, and the two are soon firm friends. With Badger, who Ratty already knows, Mole makes another new friend, and also with Toad. But with all the comedy and incident here it is Toad that captures everyone’s imagination. He is conceited and really to a certain extent obnoxious but we can’t help but root for him as he goes to prison, escapes and then finds out that Toad Hall is being squatted in by stoats and weasels.

Creating a world that has many similarities with the real one at that period, this is a tale that keeps us all enthralled as we read of the many exploits and adventures that happen here, as well as the more sedate side of life, with relaxing and taking meals with friends. Always a treat to read there is one thing here that you end up saying and can’t help yourself when you get into a car, and that is Toad’s saying of ‘Poop! Poop!’ Don’t worry it does wear off after a few days, but the next time you read the book it happens again.
Read more
21 people found this helpful
Report abuse

J. A. Elliott
5.0 out of 5 stars An utterly delightful classic
Reviewed in the United Kingdom on 28 April 2020
Verified Purchase
In old age I am re-reading the stories I remember from my youth. I am so impressed by the skill of Grahame as a writer - he is a master of descriptive English. There are no illustrations in this edition, but they are not needed. The images conjured up by the text alone are quite sufficient and very vivid. I marvelled at the sheer cleverness of the writer. It is ostensibly a children's book, but the text and vocabulary are very adult and advanced. Also, one cannot but observe the general tone of kindliness in the book, a welcome attribute and lesson for our age. I found myself beaming with pleasure as I read.
Read more
5 people found this helpful
Report abuse

The Elite Book Group
5.0 out of 5 stars A children’s classic. Wonderful…..
Reviewed in the United Kingdom on 15 November 2017
Verified Purchase
It was marvellous to be able to revisit this children’s classic which was first published at the beginning of the last century. It has lost none of its charms over the years and although anthropomorphic stories may these days be seen as old-fashioned there is no doubt that the tales of Ratty, Mr Mole, Toad and Badger remain very readable and are still highly enjoyable.

Each character has his own traits. I associated more closely with Ratty as he is comfortable staying close to home, cares about others and appears to be more mature than those around him.

The mere fact that new editions continue to be issued is a clear demonstration of the story’s continuing popularity. This particular one by Alma includes an illustration by Tor Freeman which, although not to my taste as I am a traditionalist, will be loved by younger children.