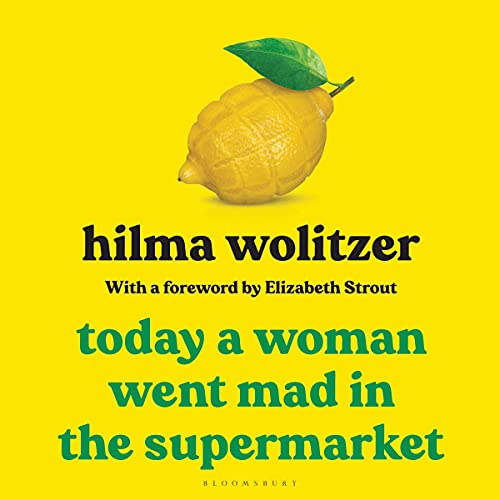 Today a Woman Went Mad in the Supermarket: Stories

With a foreword by Elizabeth Strout.

In this collection, Hilma Wolitzer invites us inside the private world of domestic bliss, seen mostly through the lens of Paulie and Howard’s gloriously ordinary marriage.

Including stories first published in magazines in the 1960s and 1970s - alongside new writing from Wolitzer, now in her 90s - Today a Woman Went Mad in the Supermarket reintroduces a beloved writer to be embraced by a new generation of listeners.

4.2 out of 5 stars
4.2 out of 5
427 global ratings
How are ratings calculated?
To calculate the overall star rating and percentage breakdown by star, we don’t use a simple average. Instead, our system considers things like how recent a review is and if the reviewer bought the item on Amazon. It also analyses reviews to verify trustworthiness.

There are 0 reviews and 33 ratings from Australia

Mary Lins
5.0 out of 5 stars Excellent Set of Stories!
Reviewed in the United States on 20 September 2021
Verified Purchase
How could ANYONE resist a short story collection titled; “Today a Woman Went Mad in the Supermarket”? I couldn’t!

Wolitzer tackles he human condition in general, and specifically women’s lives and the expectations associated with mother and wifehood, and how they have changed in modern history. Most of the stories were written in the 1970s and I enjoyed the nostalgic quality to those, while also being amazed by what has changed and what has not.

Several of the stories concern Paulette and Howard and their family over the years of their “courtship”, marriage, and raising a family. I don’t want to spoil how Wolitzer brilliantly brings their story into the present for an apt conclusion.

Read the Forward by Elizabeth Stout (and read her wonderful new novel “Oh William!”, too!) but read it AFTER you’ve read these stories.
Read more
8 people found this helpful
Report abuse

amachinist
4.0 out of 5 stars Noire: Then and Now
Reviewed in the United States on 9 September 2021
Verified Purchase
Hilma Wolitzer is a 91 year old award winning author. She is primarily noted as a short story writer. This book is an anthology of a dozen of her short stories which appeared in magazines during the 1960's and 1970's. Some of the stories seem dated, but the first story, with the same title as the book, and the last story, entitled Love, were written in 2020 after the death of her husband due to Covid 19. The process of writng helped her deal with this very personal loss.

With a paucity of words, Wolitzer creates a setting and vivid charcters in contemporary domestic settings. The stories are dark in nature and the characters are quirky. She is a master of both metaphor and simile: a purse that opens "like the mouth of a nervous child at the dentist", children clinging to their mother "with the tenacity of a tick in a dog's coat" and a lover whose "breast bone is an archer's bow." For this reviewer, the first and last stories especially make this a worthwhile and enjoyable read.
Read more
5 people found this helpful
Report abuse

gymkata
4.0 out of 5 stars Not What I Thought
Reviewed in the United States on 27 December 2021
Verified Purchase
Based on the title, I thought the book would be funny stories about women losing it. Which, it is, but it’s so much more. It’s about life, love, family, and the times. To me, the sign of a good book is how much you think about once you’ve finished it. This one is still on my mind.
Read more
2 people found this helpful
Report abuse

Gary M. Smith
3.0 out of 5 stars Not at all interesting as the reviewer stated!
Reviewed in the United States on 9 October 2021
Verified Purchase
My wife read a review in the local paper highly touting this book of assembled stories. She found it did not live up to the hype. Not her "cup of tea," so to speak.
Read more
One person found this helpful
Report abuse
See all reviews