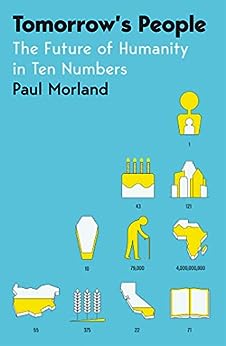 by Paul Morland (Author) Format: Kindle Edition
See all formats and editions
Sorry, there was a problem loading this page. Try again.

The great forces of population change – the balance of births, deaths and migrations – have made the world what it is today. They have determined which countries are superpowers and which languish in relative obscurity, which economies top the international league tables and which are at best also-rans.

The same forces that have shaped our past and present are shaping our future. Illustrating this through ten illuminating indicators, from the fertility rate in Singapore (one) to the median age in Catalonia (forty-three), Paul Morland shows how demography is both a powerful and an under-appreciated lens through which to view the global transformations that are currently underway.

Tomorrow’s People ranges from the countries of West Africa where the tendency towards large families is combining with falling infant mortality to create the greatest population explosion ever witnessed, to the countries of East Asia and Southern Europe where generations of low birth-rate and rising life expectancy are creating the oldest populations in history. Morland explores the geographical movements of peoples that are already under way – portents for still larger migrations ahead – which are radically changing the cultural, ethnic and religious composition of many societies across the globe, and in their turn creating political reaction that can be observed from Brexit to the rise of Donald Trump. Finally, he looks at the two underlying motors of change – remarkable rises in levels of education and burgeoning food production – which have made all these developments possible.

Tomorrow’s People provides a fascinating, illuminating and thought-provoking tour of an emerging new world. Nobody who wants to understand that world should be without it.

Compulsively readable. Regarding the cultural and political implications of enormous pending shifts in human population, Morland manages to remain admirably neutral; readers can draw their own conclusions. Will the future be better or worse? Only one thing is certain: it will be very, very different.

Paul Morland provides the demographic key to understanding so much of recent history and contemporary society - from Chinese cities, to global ageing and the rise of Africa. With great authority and an eye for the vivid detail he opens a door that I was scarcely aware of, persuading me that demography really is the master social science. -- David Goodhart

<i>Tomorrow's People</i> provides a fascinating, illuminating and thought-provoking tour of an emerging new world. Nobody who wants to understand that world should be without it. --This text refers to the paperback edition.

Tomorrow's People provides a fascinating, illuminating and thought-provoking tour of an emerging new world. Nobody who wants to understand that world should be without it.

Dr Paul Morland is a Senior Member of St Antony's College, University of Oxford. Educated at Oxford, he received his PhD from the University of London. He is the author of <i>The Human Tide - How Population Shaped the Modern World</i>. A dual UK and German citizen, Paul Morland lives in London with his wife and has three adult children. --This text refers to the paperback edition.

Dr Paul Morland is a Senior Member of St Antony's College, University of Oxford. Educated at Oxford, he received his PhD from the University of London. He is the author of The Human Tide - How Population Shaped the Modern World. A dual UK and German citizen, Paul Morland lives in London with his wife and has three adult children. --This text refers to the paperback edition.
Read more

4.2 out of 5 stars
4.2 out of 5
27 global ratings
How are ratings calculated?
To calculate the overall star rating and percentage breakdown by star, we don’t use a simple average. Instead, our system considers things like how recent a review is and if the reviewer bought the item on Amazon. It also analyses reviews to verify trustworthiness.

AW
5.0 out of 5 stars A compelling read, lucidly written, explaining the causes and impact of changes in demography.
Reviewed in the United Kingdom on 3 April 2022
Verified Purchase
I very much liked the lucid way in which this well researched book is written. Paul Morland is blessed with a fluent style and presents his compelling arguments in a user friendly way, with many examples taken from all over the world. Not only does he explain underlying trends which have had a huge impact on politics and world affairs, but in particular he looks into the future to foresee what may happen based on those trends and the threats and opportunities in the years ahead. I also liked the personal touches which showed the author's experiences from his own life. I highly recommend this book. Anthony Woolich
Read more
3 people found this helpful
Report abuse

Graham H. Seibert
4.0 out of 5 stars Covers the major factors driving demographic change, albeit with politically correct blinders
Reviewed in the United States on 17 April 2022
Verified Purchase
Paul Morland introduces this book with a modest disclaimer that demographic projections have almost always been wrong. This book is an analysis in 10 chapters of the factors that have affected and will affect the size and makeup of human populations. These are:
Infant Mortality
Population Growth
Urbanization
Fertility
Aging
Old Age
Population Decline
Ethnic Change
Education
Food

infant mortality has been dropping throughout the world due to improved sanitation and medicines. People in undeveloped countries have typically had many children in the knowledge that only a few would survive. This applied to rich and poor alike – Henry VIII, despite his eight wives, left no male heirs. The drop in infant mortality is almost invariably followed, the generation or two later, by a drop in fertility. Families do not need, and cannot afford as many children as they can bear.

Population growth is a matter of simple arithmetic. Births minus deaths plus net migration. Although births have been below the replacement rate for a couple of decades now, most of the developed world is continuing to experience marginal growth. Life expectancy is increasing, so the death rate remains low, and the richer countries are experiencing that immigration. Population pyramids, however, show that there will be a decline. Significant fractions of the population are past reproductive age, and children are not that numerous. Populations will begin to fall before too long.

Just within the last couple of decades the majority of the world's population lives in cities. Cities have not reproduced themselves since Roman times. Children in the city are a financial liability. Their upkeep and education costs money, and their labor does not contribute to the family. Quite predictably, levels of fertility have fallen throughout East Asia, Europe and North America as people moved to the cities. There are other factors at work. In the cities there is more to do – more distraction. People are better educated, and they fall away from religion and other aspects of traditional life.

Fertility in the demographic sense is the number of children people actually have, not their ability to bear them. People are having fewer children because they want fewer children. However, fertility in the biological sense is also falling. Hormone levels and sperm counts are going down throughout the world. Other authors such as Stephanie Seneff have suggested that this may be attributable to environmental factors such as agricultural chemicals (Roundup is her bête noire) and vaccines. There are also psychological factors at work. Morland says that one quarter of Japanese have not had heterosexual sex by the age of 40. People are simply not attracted to each other.

The great decrease in infant mortality, as well as improvements in public health and medicine, have led to greater longevity. Populations are getting older at a very rapid rate. Morland cites cases such as Bangladesh where life expectancy may increase as much is two years over the course of a decade, and do so for a couple of decades on end. Aging populations are less inclined to go to war, and more inclined to look to government for social benefits. The rapidly falling ratio of workers to retirees does not bode well for people who are not already of retirement age.

The number of very old people – centenarians – is skyrocketing. Caring for them is a major concern. Many of Japan's most successful startups make their money by taking care of the very senior citizens.

Populations have already started to decline in certain countries such as Japan, South Korea, Ukraine and Russia. The decline will accelerate in those countries and spread pretty much throughout the developed world. This will have a major economic impact. Consumers will not be there. The market for the resale of homes will shrink. Child care, schools, toys and children's entertainment will all get smaller.

The population decline will not affect all ethnicities equally. Fertility rates in Africa remain high. Even though they are falling, Africa's population will grow dramatically over the current century as the rest of the world stagnates and falls. Certain religious groups, among them Muslims, Haridi Jews, Amish and Hutterites maintain high birth rates. Over the course of a couple of generations, these can significantly affect the demography of a country.

Education has raised the standard of living in most countries throughout the world. Some countries such as Bangladesh have made astounding progress in raising the level of education of their populations. Educated women, given the choice of motherhood or a career, often forgo motherhood. More education is associated with lower fertility. Morland writes that there is a definite upper limit on the advantages of education. A society has a limited need for educated people. He cites Egypt as a country where there are far more educated people than jobs for them – many remain unemployed.

The last consideration Morland addresses is the availability of food. With the improved productivity brought by the green revolution and approved agricultural practices, and stagnant and falling populations, food should not be a limiting factor. Malthus and Paul Ehrlich were probably wrong to project that are fecundity would outstrip our ingenuity and food production.

There are many elements of traditional wisdom that Morland does not question. He accepts that climate change is real. He believes that it will affect the ability of different countries to supply adequate food to their populations. Morland's explanations are based on the implicit assumption that all peoples of the world are equally capable. This politically correct notion only emerged over the past few decades. Our ancestors would have found it absurd, and it flies in the face of observation. Authors Richard Lynn and Tatu Vanhanen tackle the question directly in their books IQ and Global Inequality and the earlier IQ and The Wealth of Nations. More mainstream authors such as Nicholas Wade and Richard Plomin make the same point with a bit more diplomacy and delicacy.