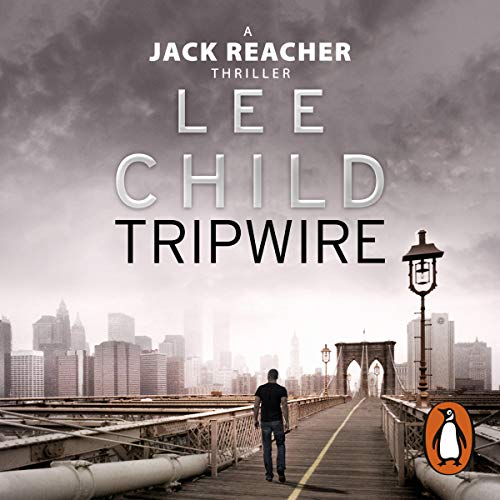 For Jack Reacher being invisible has become a habit.

He spends his days digging swimming pools by hand and his nights as the bouncer in the local strip club in the Florida Keys.

He doesn't want to be found.

But someone has sent a private detective to seek him out. Then Reacher finds the guy beaten to death with his fingertips sliced off. It's time to head north and work out who is trying to find him and why.

Although the Jack Reacher novels can be listened to in any order, Tripwire is the third in the series.

4.4 out of 5 stars
4.4 out of 5
17,842 global ratings
How are ratings calculated?
To calculate the overall star rating and percentage breakdown by star, we don’t use a simple average. Instead, our system considers things like how recent a review is and if the reviewer bought the item on Amazon. It also analyses reviews to verify trustworthiness.

MG Hammer
1.0 out of 5 stars Another boring outing for Jack
Reviewed in Australia on 2 November 2016
Verified Purchase
This is my third Jack Reacher and despite people talking about Jack Reacher novels as being action packed they are uniformly boring. Hundreds of pages pass before you get to a good scene and it is not worth the effort. You also rapidly get to dislike the fact he always gets the good looking girl and yet does not draw too much attention from the bad guys despite being so tall. People criticised Tom Cruise for playing Jack Reacher because he is short but in reality you would need to be about his size to blend in. Each book needs editing to remove about 100 or so pages. Very sloppy.
Read more
One person found this helpful
Helpful
Report abuse

Ruffy D
5.0 out of 5 stars And the adventure continues - can't put it down.
Reviewed in Australia on 26 August 2020
Verified Purchase
Although Lee Child seems to have his critics regarding the length of his books and with the detail he goes into to describe a particular situation, I find that he goes to great length to paint mind pictures as though you are watching the movie. I'm now onto Book 5 and will most likely work my way through them all. Great story and a great character. I'd like to have been Reacher.
Read more
Helpful
Report abuse

Amazon Customer
2.0 out of 5 stars This Wasn't It
Reviewed in Australia on 25 February 2015
Verified Purchase
OK, the 2-star rating is just because I'm comparing it with the best fictional books I've ever read. That's not to say there's not a lot to like about all the JRs I've loaded into my kindle, but they don't stand up against my favourites, because Child doesn't seem to be able to maintain his highish standard throughout the whole story. There are times when the plot just sags, it's as if there are two writers who take turns at being Lee Child and one of them's not that good. But I'll keep reading them because the good bits are excellent, in my humble opinion. You get the impression Child's gonna nail it one day, and you want to be there when he does.
Read more
One person found this helpful
Helpful
Report abuse

Ms Henry
TOP 1000 REVIEWER
3.0 out of 5 stars Another Jack Reacher book
Reviewed in Australia on 22 August 2020
Verified Purchase
I went through a stage when I read most of these before I got a bit tired of the violence. Entertaining enough, certainly better than Clancy or Wilbur Smith.
Read more
Helpful
Report abuse

cheryl
5.0 out of 5 stars Riveting reading
Reviewed in Australia on 3 July 2018
Verified Purchase
I like Lee Child as an author and particularly enjoy the Jack Reacher books. The story lines hold my interest until the endings which usually have an interesting twist. Tripwire had an unexpected outcome, kept me entertained from start to finish. I plan to read all of the Jack Reacher books and look forward to each new plot.
Read more
One person found this helpful
Helpful
Report abuse

Damien
5.0 out of 5 stars Awesome!
Reviewed in Australia on 18 May 2022
Verified Purchase
Loved the way the story breaks up to each individual in detail to converge to the ending. Fantastic book, highly recommended!
Read more
Helpful
Report abuse

Dryline
5.0 out of 5 stars What does Jack Reacher get up to next?
Reviewed in Australia on 27 January 2019
Verified Purchase
Adventure packed and a rollicking read as usual.
Read more
Helpful
Report abuse
See all reviews

Brosnik
5.0 out of 5 stars Jack Reacher saga
Reviewed in the United Kingdom on 14 October 2020
Verified Purchase
Yet another excellent story in the Jack Reacher series. I have been informed that each story stands in its own right and you do not need to read them in order. However, I have read many series of books and so far I disagree slightly. True, each story stands in its own right but I have noticed a development of facts and figures as I read it. So, I would recommend that for maximum enjoyment read them in the order in which they were written. Then even the background details will make sense as well as the main thrust of the story.
Read more
16 people found this helpful
Report abuse

Father Ted
3.0 out of 5 stars "Not what I expected"
Reviewed in the United Kingdom on 10 November 2019
Verified Purchase
An excessive price to pay for what had too many excesses already. The violence was over the top and unnecessary. As for the visit to the clothes shop, the frequent food stops and the explanation of the three types of shower? This could have finished in half the time. Yet again I've found that one of the legends isn't as great as the hype that surrounds him suggests. Or at least he wasn't a decade ago when he wrote this. Which begs the question - why were these early books so popular? Colour me bemused.
Read more
9 people found this helpful
Report abuse

Connors mum
5.0 out of 5 stars THIS IS REACHER
Reviewed in the United Kingdom on 8 April 2021
Verified Purchase
I just love Reachers monochrome view on solving things, its black and white, very seldom in between. Big, bluff,charmingly bad tempered Reacher draws you in and you gallop along at his pace until its solved, he leaves the gal wondering what could have been while he walks the road again.

Forget Tom Cruise, hes NOT Reacher, hes not even a poor substitute.

llewellyn ap hywel
1.0 out of 5 stars What the hye didn't disclose
Reviewed in the United Kingdom on 21 September 2018
Verified Purchase
Lee Childs has written many Jack Reacher novels, all applauded and used in movies as vehicles for Tom Cruise. What a disappointment, therefore, when I decided to sample one of the many novels for myself. This is a classic case of using 200,000 words where 50,00 would have been more effective. Overlong, not well written, with a simple plot for which an attempt at complexity was achieved merely by padding.
Read more
9 people found this helpful
Report abuse

Andrew Berry
4.0 out of 5 stars Predictable
Reviewed in the United Kingdom on 10 February 2022
Verified Purchase
I like the work of this author but like many of his colleagues there seems to be a predictability about any series of works. This perhaps appeals more to the younger generation who seem to prefer repetition but of the three books I have read I have worked out the ending and surprises by the half way mark.
This is a good read in the dentist waiting room as it can be read in short sessions without losing sense of the plot
Read more
One person found this helpful
Report abuse
See all reviews