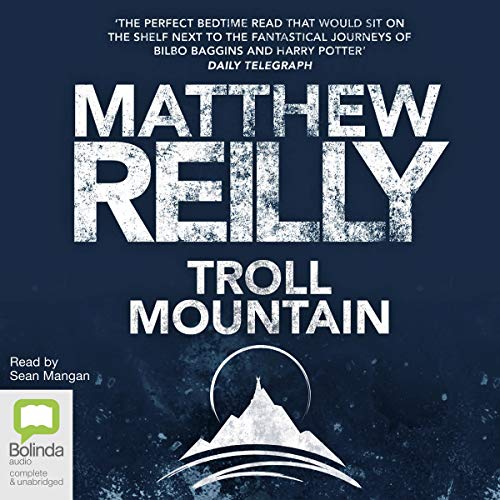 A dauntless young hero. An army of brutal monsters. An impossible quest.

Journey to the mountain... In an isolated valley, a small tribe of humans is dying from a terrible illness. There are rumours, however, that the trolls of Troll Mountain, the valley’s fearsome overlords, have found a cure for the illness: A fabulous elixir. When his sister is struck down by the disease and his tribal leaders refuse to help him, an intrepid youth named Raf decides to defy his tribe and do the unthinkable: He will journey alone to Troll Mountain and steal the elixir from the dreaded trolls. But to get to Troll Mountain, Raf will have to pass through dangerous swamps and haunting forests filled with wolves, hobgoblins, and, worst of all, the ever-present danger of rogue trolls, the journey to the mountain has begun.

4.2 out of 5 stars
4.2 out of 5
478 global ratings
How are ratings calculated?
To calculate the overall star rating and percentage breakdown by star, we don’t use a simple average. Instead, our system considers things like how recent a review is and if the reviewer bought the item on Amazon. It also analyses reviews to verify trustworthiness.

Jean Seifert
4.0 out of 5 stars THE PLOT IS SWIFT
Reviewed in Australia on 20 October 2015
Verified Purchase
I admit I was very interested to see how writing a Fantasy type story would pan out as opposed to the Action/Adventure books he normally writes. No disappointment for me, as Mathew adds so much detail, but the writing is simplistic and easy, ideal for an adolescent audience.
The story revolves around a young orphaned boy and his sister who live in an isolated, small village ruled by Trolls. There is a dreadful illness killing tribe members which is based around family and hierarchy. To add to the village problems the Trolls have cut off their water supply leaving them with just a trickle for survival. When his sister becomes ill it spurs Raf into a quest to steal a cure, which the Trolls possess. Thus the adventure begins!
As with all of Mathew Reilly's stories this is a fast paced, action packed adventure that you will find it hard to put down. The strategies used to confront his foes not to mention the difficulties on this quest are well thought out and unexpected. The amazing fortress of the Trolls is extensive and the courage required to conquer all of this and escape will keep you on the edge.
Read more
One person found this helpful
Helpful
Report abuse

This also would appear to be Reilly's first foray into the world of children's books. There is nothing in here that would upset a young reader - there is a clear moral to the story, and there are few shades of grey, characters are generally either good or evil, not much nuance to be found here. I suspect some fans of his previous novels may find this a bit simplistic and perhaps a little disappointing. I found it very enjoyable, although not challenging.
Read more
Helpful
Report abuse

Bobbie
5.0 out of 5 stars Didn't want to read it.
Reviewed in Australia on 16 June 2017
Verified Purchase
I didn't want to read this book. Trolls. I'm not interested. But I'd been given this at some stage & was looking for something to read. Maybe I should try something different. I thought I'd put it down if it didn't grab me & not think of it again. In typical Matthew Reilly style, I was grabbed & hooked from the first pages. It says something when you don't want to do it but then really enjoy it. Matthew has an wonderful talent & his books never let you down. I should have known.
Read more
One person found this helpful
Helpful
Report abuse

Matthew
4.0 out of 5 stars Another exciting read from Reilly
Reviewed in Australia on 17 May 2018
Verified Purchase
Anyone familiar with Matthew Reilly's work this is another one of his formulaic fun action packed adventure stories. It doesn't delve too deeply into character development or backstory too much. Its basically a fantasy journey for a boy who must triumph against ridiculous odds and powerful enemies, its an exciting and entertaining read.
Read more
Helpful
Report abuse

Julie
4.0 out of 5 stars Fast and entertaining
Reviewed in Australia on 5 December 2019
Verified Purchase
I really liked the characters and the belief behind them. I liked what they stood for and how those characteristics either let them down or lifted them up. I like how the author has a lesson in the short story that everyone could relate to.
Read more
Helpful
Report abuse

Chris Radge
5.0 out of 5 stars Read
Reviewed in Australia on 14 October 2019
Verified Purchase
While this is shorter than his other stories it is not less impactful with story, twists and wit. Defs one for your TBR pile.
Read more
Helpful
Report abuse

Beverley
4.0 out of 5 stars Simplistic energy
Reviewed in Australia on 22 January 2018
Verified Purchase
A book for all ages. Fast, clear storyline and ethos. I can imagine a group listening enthralled unwilling to leave until this ended!!
Read more
Helpful
Report abuse

Anne Dooris
5.0 out of 5 stars Great Read
Reviewed in Australia on 7 May 2017
Verified Purchase
As usual, Matthew Reilly delivers a novel that absorbs you in right from the start and keeps you there til the last word. I have enjoyed all his novels and this one is no different. Thrilling, exciting etc ...a great read
Read more
Helpful
Report abuse
See all reviews

Dogbite Dave
5.0 out of 5 stars A GREAT KIDS BOOK AND ADULTS ARE BIG KIDS REALLY
Reviewed in the United Kingdom on 29 July 2016
Verified Purchase
I have read a lot of Matthew Reilly books and bought this on the strength of every one of them have been worth the read.
This has not disappointed me even though I did not even look up the storyline.
This is more of a children's book than anything but even so I thoroughly enjoyed it. Trolls, opposing tribes, a hint of lord of the rings, adventurous youth with daring do.
Basically a tribal system has the hero of the day as a manual labour grunt, denied access to the upper echelons by birth.
Disease strikes and the hero goes looking for the cure from the trolls who like to eat people by the way.
Meets up with sidekicks and ................... I do not want to spoil the book do I?
Thats the scene set for the book and a lot more that I knew before I started it.
This is a brilliant book for reading to and with imaginative children.
Well worth buying. Well worth the read.
If you have found this REVIEW HELPFUL PLEASE CLICK ON THE HELPFUL REVIEW BUTTON
Read more
13 people found this helpful
Report abuse

Robbie
3.0 out of 5 stars OK Sort of book but too predictable
Reviewed in the United Kingdom on 22 October 2014
Verified Purchase
Usually love to read Matthews books especially Scarecrow etc so thought I'd give this a go. It was an ok sort of book but didn't get me to the point where I couldn't wait to see what happens next, it was very predictable with the out come being what it was. I don't believe in spoilers so not going into the depth of the story as some reviews do. Hoping Matthews next book will be much better COME BACK SCARECROW and the fast roller coaster pace
Read more
2 people found this helpful
Report abuse

Amanda Desmond
5.0 out of 5 stars Heroes and classical music
Reviewed in the United Kingdom on 26 May 2019
Verified Purchase
A typically fast-paced Matthew Reilly adventure that is both of ancient times and out of time. Play the 'Peer Gynt' soundtrack as you read it and you'll have the perfect environment to go this hero- quest with Raf.
Read more
Report abuse