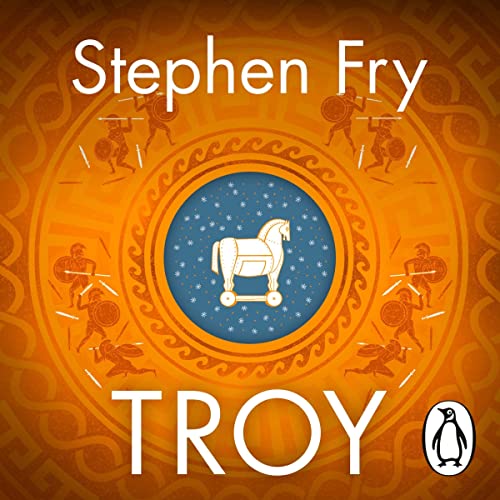 Troy: The Siege of Troy Retold

Following the best-selling retellings of the Greek myths in Mythos and Heroes, Stephen Fry's bewitching third volume, Troy - concerning love and war, passion and power - is now ready for ordering.

The story of Troy speaks to all of us - the kidnapping of Helen, a queen celebrated for her beauty, sees the Greeks launch a thousand ships against the city of Troy, to which they will lay siege for 10 whole and very bloody years.

It is Zeus, the king of the gods, who triggers the war when he asks the Trojan prince Paris to judge the fairest goddess of them all. Aphrodite bribes Paris with the heart of Helen, wife of King Menelaus of the Greeks, and naturally, nature takes its course.

It is a terrible, brutal war with casualties on all sides as well as strained relations between allies. The Greek's most fearsome warrior, Achilles, argues with King Agamemnon, his commander, over another woman, the Trojan slave Briseis. The consequences lead to terrible tragedies.

In Troy you will find heroism and hatred, love and loss, revenge and regret, desire and despair. It is these human passions, written bloodily in the sands of a distant shore, that still speak to us today.

It is a myth in which we seek the truth about ourselves and which Stephen Fry brings breathtakingly to life.

Switch between reading the Kindle book & listening to the Audible narration with Whispersync for Voice.
Get the Audible audiobook for the reduced price of $11.99 after you buy the Kindle book.
Last chance - Ends Tuesday!
Learn more about membership
By completing your purchase, you agree to Audible’s Conditions Of Use and Privacy Notice.
Sold and delivered by Audible, an Amazon company
Share

5.0 out of 5 stars
5 out of 5
2 global ratings
How are ratings calculated?
To calculate the overall star rating and percentage breakdown by star, we don’t use a simple average. Instead, our system considers things like how recent a review is and if the reviewer bought the item on Amazon. It also analyses reviews to verify trustworthiness.

Bob Carnegie
5.0 out of 5 stars Great Read
Reviewed in Australia on 22 January 2021
Fry breathes life into the struggle of Trojans.
Read more
Helpful
Report abuse
See all reviews
Back to top
Get to Know Us
Make Money with Us
Let Us Help You
And don't forget:
© 1996-2022, Amazon.com, Inc. or its affiliates